We have got to program our TiVo DVR to get a season pass for CHRIS DALY -- we missed our favorite moonbat left wing District 6 Supervisor yakking it up about impeachment with "you're hurting America"'s own Tucker Carlson last night! Check out that picture of Tucker eating a ceremonial shoe when he was wrong about Hillary Clinton! Always makes us laugh. (but not as much as when Charles Barkley kissed a donkey ass after losing that bet about Yao Ming.) 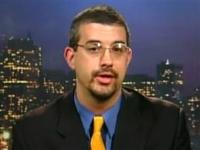 Good thing about the show: Daly did not say America could be defended by the Coast Guard.

Bad thing about the show: Chris was rocking some sort of mountain-man unshaven look.

Chris readily admitted that SF has no impact on whether Bush gets impeached, "absolutely not." But -- and you know we're always happy to mock Daly -- we have to say, he did a pretty good job defending his resolution. He noted that it cost no money to pass the resolution, that the tax revenues from San Francisco that went to the Iraq war total $800 million, and that San Francisco is right to be outraged about the way the presidency's been going.

CARLSON: There are Republican fundraisers sitting at home right now, taking notes on you, ready to raise more dough in direct mail pitches.

DALY: I'll take on their direct mail and square off on them and I'll beat them. And San Francisco will lead the country. And George Bush will go down as the worst president in American history.

You know, we don't say this often. We read through this and we were of Daly. Like Tucker Carlson, we'll happily eat a (cake) shoe!

Transcript here, and you can also watch the video of Daly's interview.

Picture of Tucker Carlson from CNN

We have a lot of the screeners lying on our desk, gazing at us reproachfully as we while away the hours watching Tyra crap out on stripping and . We're pretty dubious that we're

They're having their annual photo contest right now, the theme of which is “Wonders of the World” and should be "photos of something (things, people, places, and/or moments) extraordinary you caught on