Save Kepler's! The Menlo Park community is rallying around the storied independent bookseller, who recently announced that it would have to shut down due to increasing rents. SFist Mary-Lynn was one of the two-hundred plus bibliophiles in attendance, and reports "TONS" of kids and signs, and that the car horns of support from El Camino were sometimes so loud that you couldn't always hear what people were saying. 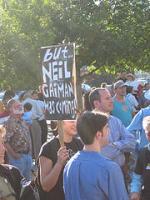 After the rally (at which owner Clark Kepler himself, along with good neighbor Mr. Baronne from Cafe Baronne next door to Kepler's, spoke), business types went into City Hall for a brainstorming session. Ten to fifteen investors have already been lined up, and other people have suggested that they work with Menlo Park neighboring town's Stanford Business School for additional help.

Check out more of Mary-Lynn's awesome photos on Flickr or after the jump.

Welcome again to American Football Spectacular, your guide to American football in the Bay Area, and all points beyond. After yesterday's 49ers preview, we turn our eyes Eastward, towards the trill of The

WorkinDevil Originally uploaded by Canon Fodder. Praise the Lord! The latest issue of "SF Faith: The Bay Area's Lay Catholic Newspaper" is out. What do you mean, "newspaper" might not be the right