The problem with a protest on the peninsula, of course, is that without Frank Chu how do you know it really happened? We took some pictures just in case. Since no news station cares about traffic on the 280 near Woodside, we knew something was up when we came out of work and saw four helicopters overhead. Oops! We forgot - Arnold's in town today! 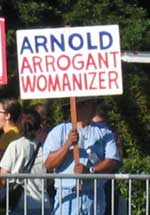 Governor Schwarzenegger was in Menlo Park at the swank Stanford Park Hotel at a fundraiser. We're not sure how many dollars a plate it was but we're certain it was more than our cold cereal dinner is worth. There were probably a couple of hundred people there protesting against the November election and the propositions it will contain. We arrived just as it was ending, but the police and media were certainly out in force, along with many of your ordinary folks speaking out against cuts to health care and education. Traffic on El Camino slowed down and the protesters got plenty of honking support.

We received a nice note from Wendy over at KQED's Bay Area Bites Blog who tipped us off about the following opportunity: A heads up for all you local foodies out there...KQED

Last week's Flaunt! fashion show, presented by f.r.e.s.h. (Fund-Raising Events to Spread Hope) had a lot going for it. First, it's for a great cause: all proceeds went to