The Prison Art Show is an annual function at the Pier 5 Law Offices featuring artwork from incarcerated men and women all over the country. But the 2017 Prison Art Show has a singular and surprising distinction  it hosts more than two dozen works by Ghost Ship proprietor Derick Ion Almena, who has been charged with 36 counts of involuntary manslaughter in the December 2016 warehouse fire that claimed three dozen lives. Almena remains incarcerated at the Santa Rita Jail, but SFist attended the opening of the Prison Art Show to get a few snapshots of the conflicting and dark work of Almena, plus some more uplifting pieces by several other inmates. 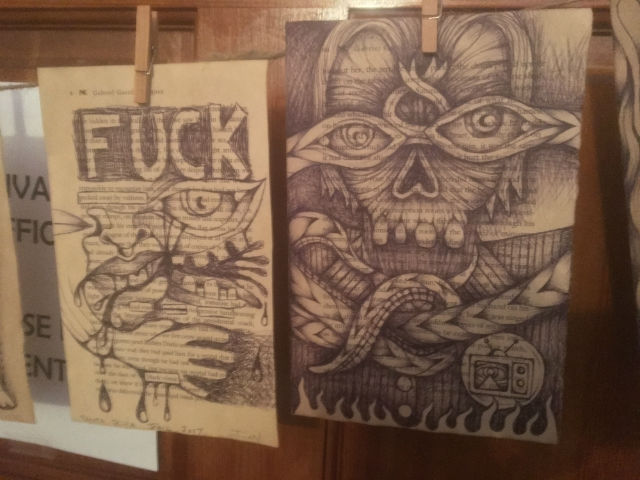 As seen above, Almena’s artwork is mostly pencil and ink sketches etched onto ripped-out Bible pages. Some are presented framed, others are hung by clothespins. They’re sort of spiritually darker versions of what you might see in a Dungeons and Dragons Monster Manual, but with the obvious contextual backdrop of his current legal and emotional troubles. 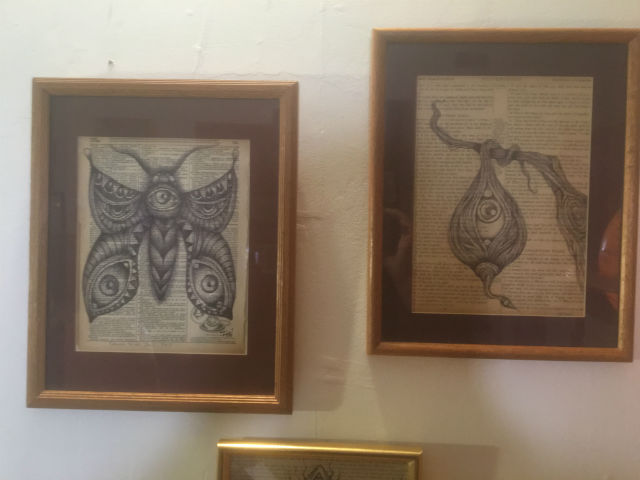 Almena is represented by high-profile defense attorney and Rocky Horror cast lookalike Tony Serra, whose Pier 5 Law Office is hosting the Prison Art Show for its 18th year. “It’s good for prisoners to have art as a form of self-medication,” Serra told SFist, while he was also ‘self-medicating’ if you catch my drift. “When they get on the inside, that’s their only major creative outlet.” 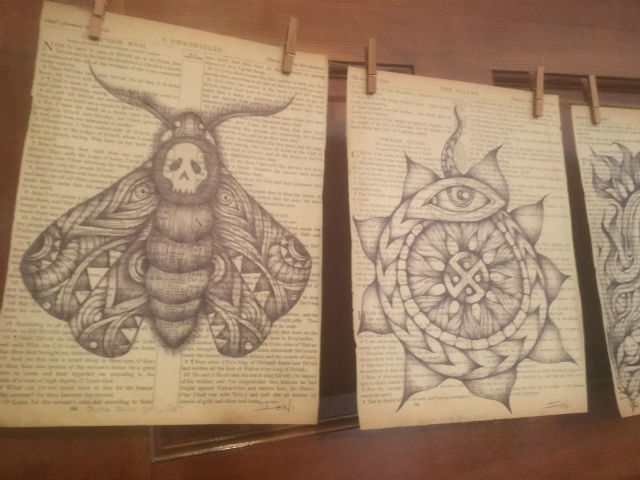 Serra did give an update on Almena and his case, wherein Almena’s bail was just lowered to $750,000 but it is still too large a sum for him to afford. “That’s no bail, that’s bullshit,” Serra fumed. “He’s not a flight risk, he waited around and told everybody where he was.” 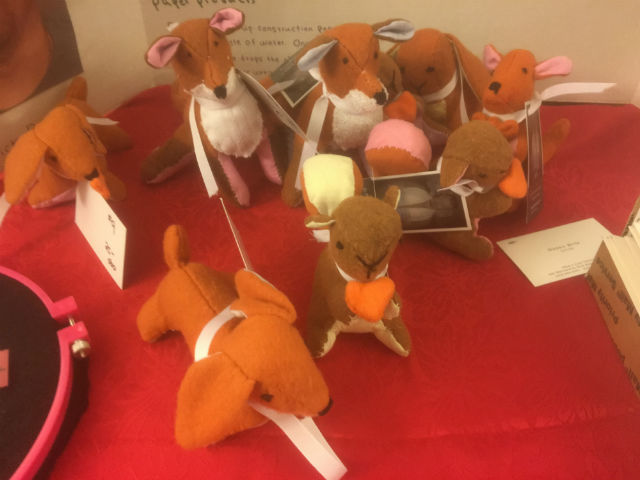 Several of the inmates’ pieces were more hopeful in their tone, notably these adorable foxes literally made out of standard-issue inmate sweatpants! The show was initiated in the late 90s from works by Native American death row inmate Patrick “Hooty” Croy, whom Serra got acquitted after a 12-year legal struggle. “He started doing Indian art, and was sending us a whole bunch,” Serra said. “We started just showing Indian art, it started first as a tribute to the Native Americans imprisoned.” 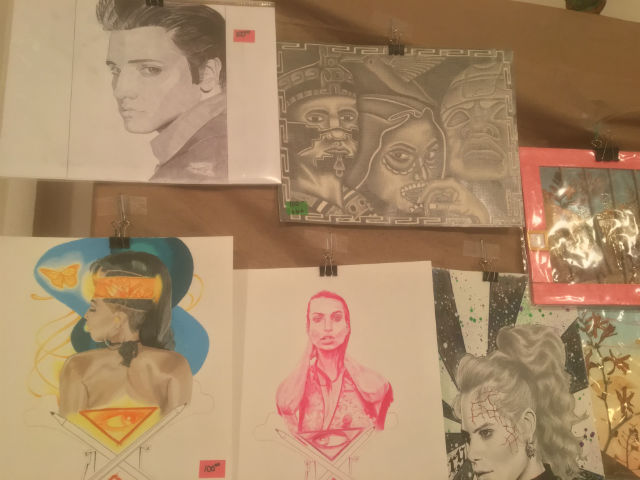 The show now takes work from inmates all over the U.S. “A lot of the art is, I call it, rising out of their needs and desires,” Serra added. “Pictures of an apple, which they don’t get or infrequently get, a picture of a beautiful naked woman because they’re deprived of female contact. It’s a good way to ventilate the needs and emotions they have.” 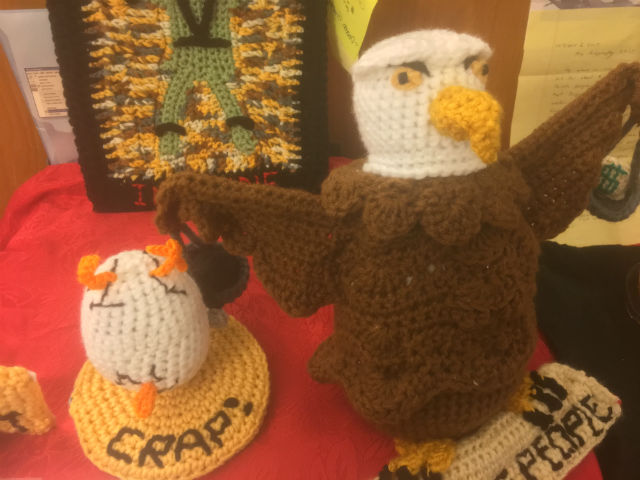 The pieces are sold and the money goes to inmates’ families, as prisoners are not legally allowed to profit from their work. The crocheted pieces above were accompanied by an artist’s statement that began, “I have been incarcerated at San Quentin since 1995 and crocheting for approximately six years.”

Good work Pier 5 Law Offices! And thanks for the photo @this_is_sara_frances

Pier 5 Law Offices has been in the news recently for what we may see as more whimsical purposes  the above “F**k Donald Trump and his Nazi Friends” banner they hung in September. “Originally it was just supposed to say ‘F**k Trump;” Pier 5 attorney Brian Ford told SFist. “It was a week or two before the Crissy Field protest was planned with the alt-right folks, we decided it should say ‘F**k Trump and his Nazi Friends’. It was a statement of solidarity with the sentiment of the Bay Area, it was as declaration principle, it was identifying ourselves and where we stood.”

Things got less whimsical when the death threats started rolling in. “Last week was when the troll attack happened,” Ford said. “The response from the alt-right was very organized, it went out on a couple of different chat boards. We got some violent threats, some threats to burn down the building. The phone lines were so jammed up we has to put them on nine-mode for a few days.“ (Nine-mode refers to automatically sending all calls to voicemail, as receptionists couldn’t handle the call volume.)

Broke-Ass Stuart led an online campaign to jam Yelp with five-star reviews, to counteract all of the bogus one-star reviews coming in from wingnuts nationwide. (The reviews are still pretty ugly, and conspicuously dated.) But obviously the firm that’s represented Almena, Raymond “Shrimp Boy” Chow and countless other controversial defendant takes the all-publicity-is-good stand. Their current banner reads “Time to Topple the Tyrant Trump,” and they have plenty more Trump banners in the works.

Related: Profiles Of Eight People Who Died In The Oakland Warehouse Fire

A large-scale benefit concert is rumored to be in the works for next month at AT&T Park, says Willie Brown in the Chronicle, with all the proceeds going to benefit victims