It’s been a bumpy ride for the tech-loving private shuttle service Chariot, which arrived three years ago to make “transportation better only for some people” in the words of Muni Diaries. Chariot has since paid shills to evangelize at bus shelters and caught hell for blocking Muni stops, but they got acquired by Ford Motors which surely fulfilled their founders’ endgame. But that hasn’t fulfilled the SFMTA’s desire to see these private buses better regulated, to which end the transit authority passed a few new rules Tuesday governing the emerging new jitney transit scene, according to the Examiner.

While these fresh regulations do “require private transit to provide wheelchair accessible vehicles and to submit operating data to the San Francisco Municipal Transportation Agency” per the Ex, they completely punt on the two biggest problems Chariot poses: the regular complaints about blocking crosswalks and Muni stops, and the problematic duplication of Muni lines that rather intentionally cannibalizes public transit ridership and slows down buses to even more sluggish speeds.

The SFMTA didn’t pass a proposal to ban Chariot routes that match Muni routes by 75 percent or more. They’re likely to revisit that ban, though surprisingly would consider grandfathering in current Chariot routes.

And as the Examiner points out, the regulation of Chariot may have the unintended consequence of bolstering business for the new Lyft Shuttle service. “Doug Bloch, political director of Teamsters Joint Council 7, which represents locals across the state, advised that Lyft’s bus service competes directly with Chariot, but is not regulated by the SFMTA — and that strict regulations for Chariot may benefit Lyft,” Rodriguez writes.

Lyft Shuttle is similarly an app-based commute-hours transport service introduced in June which the Chronicle described as “essentially reinventing the concept of a bus” and Salon hailed as “pretty much a glorified city bus — with fewer poor people.” 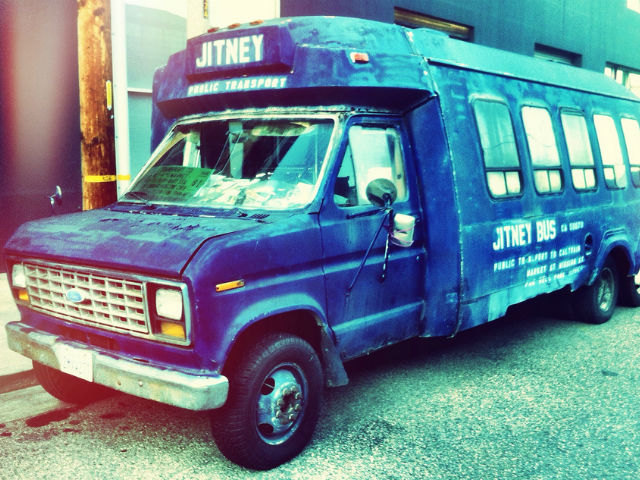 The regulations classify Chariot (and its inevitable future competitors) as “jitneys.” Longtime SF residents will recall the old jitney buses, like the vehicle above that once operated on Fourth Street. You could not have paid me to set foot on that sad, rickety jalopy, but SF Weekly recalls that jitneys were a critical form of local transit through much of the 20th century.

The problems with those old-timey, legacy jitneys give us insight on why regulation of modern-day private transit is so important. Mission Local wrote a 2014 historical retrospective on the jitneys in which one-time driver Michele Di Pilla said, “The dealer would give us vans with 12 seats, and we arranged to have 20 seats.”

“We took out the van seats and put [in] bus seats that we bought from junkyards,” the jitney driver admitted.

After pledging aid on behalf of the federal government to California Governor Jerry Brown, ABC 7 reports that Trump has yet to make any plans to visit any of the areas in Northern

The contract firefighter who died after his water tanker truck went off the road in Napa early Monday morning has been identified as 38-year-old Garrett Paiz of Missouri. Paiz had come to fight

—
SFMTA Cracks Down (Sort Of) On Chariot, Other Private Buses
Share this