A chef who's worked the prestigious lines in the kitchens of Michelin triple-starred places like the French Laundry and Quince is a burgeoning force in the growing field of cannabis cookery, and next week he'll be showing off his prowess with THC- and CBD-infused cuisine at two pop-up dinners here in San Francisco. Chef Payton Curry, whom the Chronicle's pot blog Green State recently named one of America's "top 10 cannabis chefs," graduated from the Culinary Institute of America in New York, and he's currently trying to carve a niche for himself with what he calls "whole plant comfort food," utilizing techniques he's perfected in launching his edibles company, Flourish Cannabis. His retail products, which can be found at SF dispensaries like Urban Pharm and ReLeaf Herbal Cooperative, include things like cannabis-infused ketchup, honey, tomato sauce, dill dip, ranch dressing, and a variety of cookies and macarons.

On August 15 and 16, Curry will be cooking the first in a series of five-course "Cannavore" dinners, showcasing both his own culinary talents and the versatility of the cannabis plant. Both dinners are all vegetarian, with the August 15 dinner featuring Latin American flavors and dishes (like a vegetarian posole with Rancho Gordo heirloom beans in a rich chile broth), and the August 16 dinner featuring North American cuisine (like a "pot" roast with herb-basted maitake mushroom steaks with red wine reduction). Both dinners require a current California medical marijuana card to attend, and cost $150 per person.

"I want to use the Cannavore events to change the way we think about cannabis," says Curry. "Cannabis is an incredibly valuable plant, with health and nutritional benefits that can outpace more celebrated greens like kale. We’ve planned out a really high-end culinary experience that will open people’s eyes to what this plant can do." 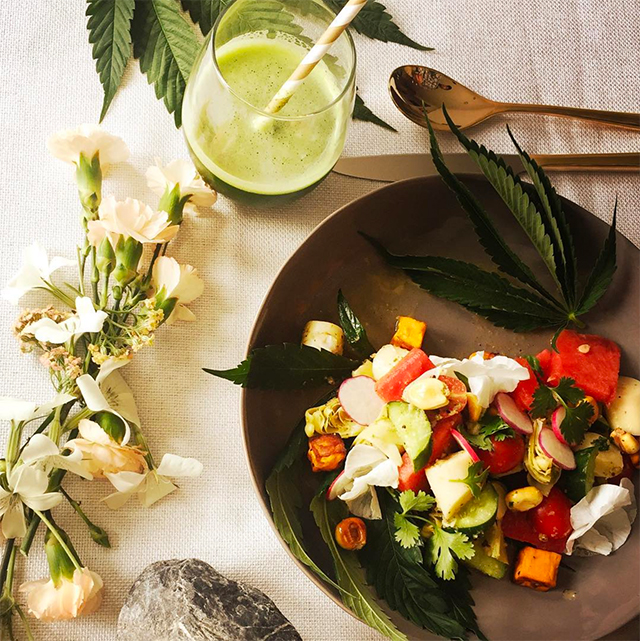 Additionally, Curry is teaching two cannabis cooking classes on August 16 and 17. The first is "an introduction to cannabis, including THC and CBD activation, for the home cook," and he says that by the end of it, "Patients will be able to apply proper dosing and infusion techniques at home and find comfort preparing cannabis cuisine on their own." A second "higher learning" course the next day ($500 per person) will off "advanced techniques for cannabis cooking, with an emphasis on commercial edible manufacture."

Find tickets for the classes here at Eventbrite.

Curry has big ambitions that include, possibly, a brick-and-mortar restaurant somewhere down the line. But for now, next week's events are the only window you'll have into his version of high-end cannabis cooking.

If you go, though, try not to get too weird by the time the fourth course rolls out.

Some of Curry's handiwork, including one of his CBD-infused cannabis juices.

Staples, the office supply chain, recently partnered with Lady Gaga's Born This Way Foundation and DonorsChoose.org to donate $100,966 to San Francisco teachers' projects. ABC 7 reports that the gift is