Facebook founder and fleece enthusiast Mark Zuckerberg toured Montana's Glacier National Park on July 15 and as one might imagine, the tour's guest list was a hot-button issue.

KPIX 5 reports that the Department of the Interior, under the administration of President Donald J. Trump, decided not to let park superintendent Jeff Mow and U.S. Geological Survey ecologist Daniel Fagre accompany Zuckerberg on the tour as they planned to and instead have him escorted by four park rangers.

Officials with the department insist this isn't because they were concerned over scientists broaching the climate debate but rather because letting Mow and Fagre tag along would cost taxpayers too much money.

"...Every tax dollar matters," said agency spokeswoman Heather Swift, whose boss uses tax dollars to fly back and forth to his golf course in Florida. 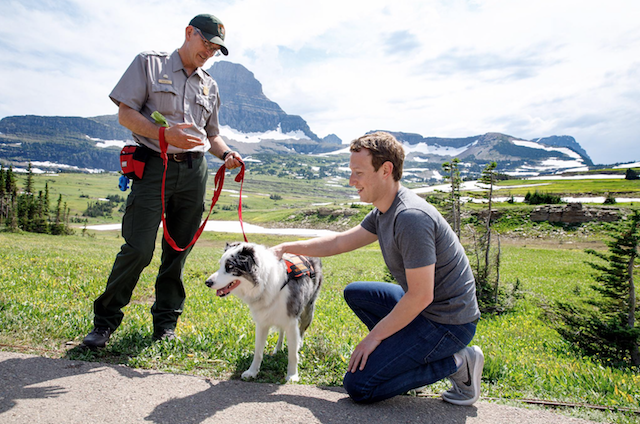 Lucky for science, Zuckerberg already knows about climate change because it's real and exists. He posted pictures and an update from his trip to the park on his Facebook page, saying:

"I'm spending the afternoon at Glacier National Park in Montana with some National Park Service Rangers. The impact of climate change is very clear at Glacier. In the last hundred years, the average global temperature has risen 1.5 degrees. But in the high elevations of Montana where Glacier is the temperature is warming at 3x the global average -- enough to melt glaciers. Since the 1850s, the number of glaciers here has gone from 150 to 25. In a couple of decades, there may not be any glaciers left in the park at all. The people here have no idea what the effects will be when glacier water stops flowing into the ecosystem. Thanks to all the rangers for all you do and for showing me around such an amazing place. We need to make sure parks like Glacier -- and the planet overall -- are around for future generations to enjoy."

See? No need to bring a scientist along. This incredibly powerful global businessman doesn't need any more information that he already has.

Related: Mark Zuckerberg's San Francisco Neighbors Have Just About Had It With Him

'Cult' is a word that gets thrown around casually a lot to describe everything from Mormonism to Soul Cycle. But here in the Bay Area there's been a special affinity for cultism, and

TechCrunch writer Catherine Shu repeatedly declined the advances of 500 Startups venture partner and entrepreneur-in-residence Tristan Pollock but that didn't stop him from allegedly grabbing her and groping her. Disgusted with what she