The time has come, everybody. The Namu Gaji team is officially expanding to Divisadero next week, and praise the lord they're bringing the Gamja Fries. As Tablehopper reports, Namu Stonepot (553 Divisadero at Hayes, the former Jay's Cheesesteak) will be bringing some of the greatest hits from Namu Gaji and the former Namu on Balboa Street in a fast casual environment, and the deliciousness starts on Thursday, July 27.

It's been over a year and a half since Jay's Cheesesteak closed and we first heard word of this project, but such is the way with these things sometimes. In the meantime, they've completely remodeled the space and added some mural art by Victor Reyes  see a photo below  and chef Dennis Lee has hosted several pop-ups to test out some dishes, including a new ramen stonepot, involving Tokyo ramen noodles that get a bit golden from the pot, and a chicken bone broth, and Tablehopper reports that it's a creative and less brothy version of ramen that's pretty delicious.

Coming over from Namu Gaji are the aforementioned, stoner-friendly Gamja Fries (fries done Korean poutine-style, topped with bulgogi beef, gochujang, kewpie mayo, and kimchee relish); the popular kimchee okonomiyaki pancake, this time somehow involving the stonepot; and the stonepot rice dish that can be ordered with bulgogi, organic soy-marinated chicken thigh, or the daily poke. And getting revived from the original Namu are the famed Korean tacos (seaweed "shells" filled with your choice of beef, chicken, or tofu), as well as their Sizzling Sisig done in a stonepot  says Tablehopper, "It comes in a stonepot full of crispy and crackling pork (both ground pork and pork head and jowl, rendered twice!), its richness cut by green cabbage and pickled onions, jalapeños, and celery."

Also exciting sounding is the Kimchee Stew in a stonepot, involving a pork and kimchee broth, with rice cakes, pork belly, and optional ramen noodles.

All this stuff will be available for eat-in or takeout, and for delivery on Caviar and Postmates.

See the draft opening menu below via Tablehopper, which may be subject to change. 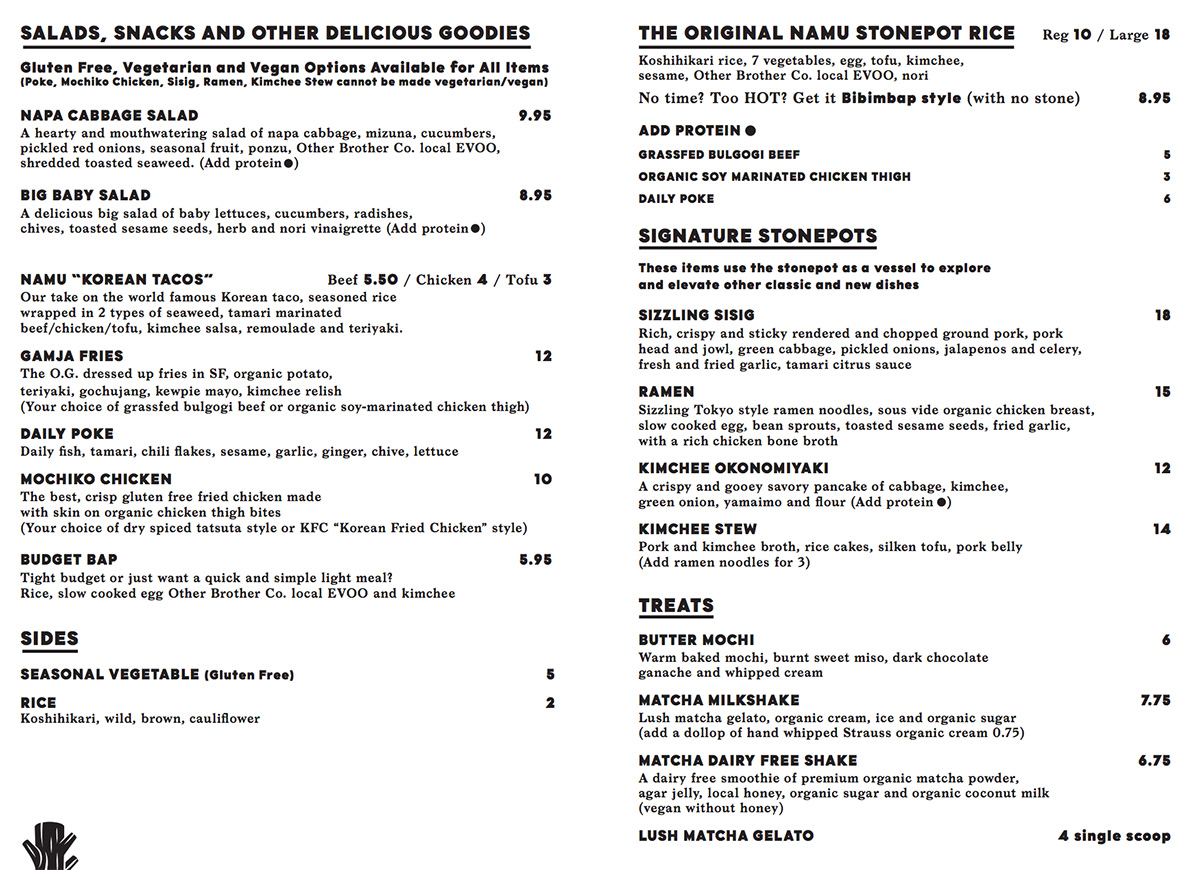 A high-profile case that was initially reported as a kidnapping from a San Francisco park is reportedly more complicated than it first appeared, as the father in the case has now been arrested.

The sinking and leaning tower of our downtown skyline, the eight-year-old Millennium Tower, continues to sink and tilt, and new data released by an engineering firm that has been monitoring the tower's movement

—
Namu Stonepot Debuts Next Week On Divisadero
Share this