Plans are moving along for the tall building high-rise zone at Market Street and Van Ness Avenue, as a roughly 12-block area around that crossroads has been granted higher height allowances by the SF Planning Department. The most notable change could be what you now know as the Honda dealership at 10 South Van Ness Avenue, which Miami-based developer Crescent Heights hopes to turn into the double-tower condo and retail complex seen here on Socketsite and rendered at street level above. That project is currently entering its obligatory environmental impact review with Planning, but SocketSite noticed a little change in plans wherein the developer now wants to include 984 units of housing (a roughly 25 percent increase from the originally proposed 767 units) and a parking garage with 518 spaces (up from 275 parking spaces originally proposed.)

This proposed two-tower development comes in addition to planned towers on all four corners of the intersection, including this one at 30 Otis Street, and this Snohetta-designed tower now going by the One Oak. 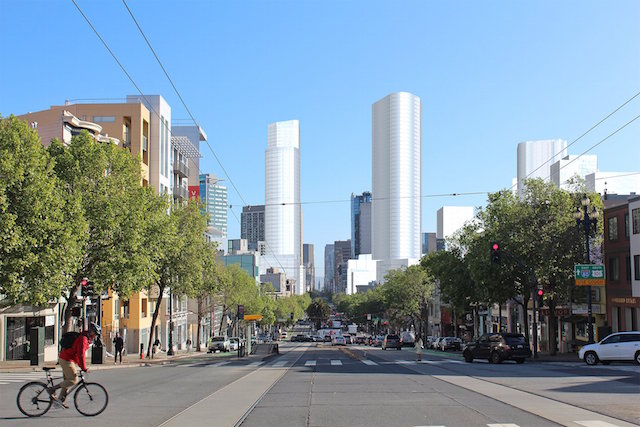 Both of the proposed towers would be about 400 feet tall, obviously a massive height increase over the current one-floor Honda dealership. While the rendering above shows different proposed developments, it gives you a sense of things possibly to come with that district’s new height allowances.

As you know, no major San Francisco condominium project is complete without an obnoxious neighborhood nickname rebrand, and the developers of as many as 9,000 new units would like for you to start referring to the Market Street and Van Ness Avenue area as “the Hub District.” (If you’ve already eaten lunch, you may not want to risk vomiting by finding out that The Hub already has a Nextdoor page). But it is a historical throwback nickname, as the Planning Department points out that “From the 1880s through the 1950s, the area of San Francisco near the intersections of Market Street with Valencia, Haight and Gough streets was a well-known and distinct neighborhood called the ‘Market Street Hub’ or simply, ‘The Hub’.”

History aside, longtime locals in this and adjacent neighborhoods are less than thrilled over the effect of these two 41-story towers, plus the impending 40-story luxury high-rise planned at what is now the All-Star Cafe at 1500 Market Street. The push for private parking lots and paid parking spaces may be more of a developer need than a community need. “One of the reasons the developers may have opted for this drastic parking increase, in a city that’s rapidly getting more congested, is money,” Nuala Sawyer notes in SF Weekly. “Charging tenants for car parking spots is a solid source of monthly income.”

Hayes Valley Neighborhood Association president Gail Baugh shares that concern. “The NEMA apartment building at 10th and Market has many parking spaces that are not being used,” she tells SF Weekly. “Why continue to build buildings ignoring transportation forecasts that continue to point toward less car ownership, especially in transit-rich areas?”

If nothing else, these two towers are at least significantly less ugly than many of the other unappealing rectilinear slabs that define the current condominium boom. And Crescent Heights has a Plan B should the double tower design get denied by Planning, the 55-story single tower seen below, via SocketSite, which would hold just as many units as the combined two tower plan would. 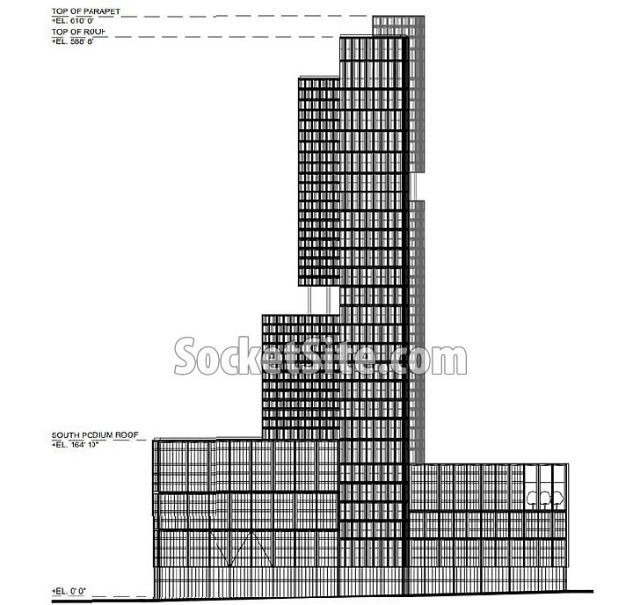 The view from Upper Market with proposed Hub height limits. Rendering via Planning

Dear San Francisco, The bar known as Dear Mom is no more. In its place, with a fresh coat of paint and new vibe, is Darger Bar  a bar with a value-centric food

For the first time, an Airbnb host who exhibited racism on the platform  an all too common occurrence — will be held legally responsible and penalized. Tami Barker, the owner of a home at