We just heard this week that the architect team behind Salesforce Tower had nixed a planned redwood grove that was to be a feature of what will be called Mission Square  the public space at the base of the tower at Mission and Fremont Streets that also sits adjacent to the Transbay Transit Center. This news came not long after word that a big, possibly awkward-looking sculpture made out of the concrete scraps of the former Transbay Terminal by artist Tim Hawkinson, which would have stood in front of the redwoods, had also been scrapped due to escalating costs.

Well now, the revised plan was just presented to the Planning Commission Thursday, and as the Examiner reports, some of the commissioners were nonplussed.

The new plan calls for a more open, paved plaza with LED lighting embedded among the paving stones and steel grates, and just four maple trees along the Fremont Street edge. Still there is the gondola/funicular that will ferry people from street level up to the tree-lined public park on the Transit Center's roof. The Chronicle's John King outlined the revised plan in this piece that published prior to the Planning Commission meeting, striking a positive tone about opening the sight lines between the Transit Center's main entrance and the street  and speaking to local architect Mark Cavagnero whom Salesforce CEO Marc Benioff asked to design the plaza, which was originally designed more than half a decade ago by Berkeley’s PWP Landscape Architecture. 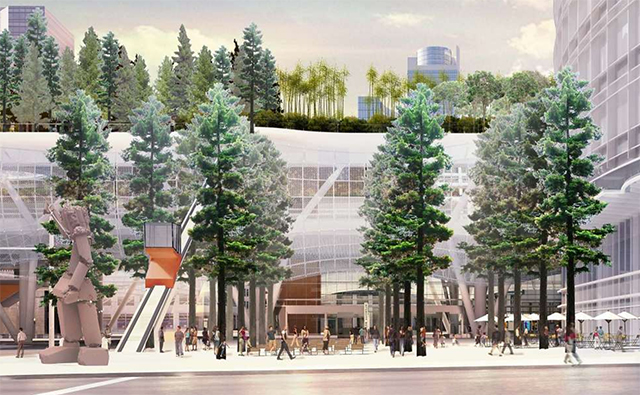 (King also reports that the reasons for scrapping the Hawkinson sculpture were not merely financial: "there were concerns about the safety of a concrete collage looming over public space  especially since 'periodic engineering stability evaluations were deemed necessary that represent potential long-term risks.'")

Speaking at the Thursday Planning Commission meeting, Commissioner Kathrin Moore did not mince words, as the Examiner reports. Referring also to the dramatic planned lighting scheme for the tower's crown, she said, "I do not believe that light on the bottom and light on the top are the right answer here. I believe that they make too much of a carnival."

Per the Examiner, Commissioner Christine Johnson also criticized the new plaza design for lacking a focal point, saying, "This design needs help, something in the middle between a full-on redwood grove and a blank plaza."

Planning Director John Rahaim, who was involved with the redesign and feels it addresses the crush of people  as many as 100,000 a day  who are expected to pass through the plaza on a regular basis. But he reportedly said he would be bringing the commissioners' suggestions to the negotiating table with the developer, the Transbay Joint Powers Authority, and Salesforce.

In any event, it sounds like this plaza  for which the paving stones and grates have already been purchased, and which is expected to open next spring  may be seeing at least one more draft by Cavagnero.

A pair of bike-riding thieves rode up to a grocery-laden woman and knocked her to the ground as she walked in the Mission, police said Friday. According to the San Francisco Police Department,

A man kicked out of a Mission District business for smoking reacted most aggressively Thursday, attacking the man who told him to snuff his butt. The dispute began at 4 p.m. Thursday,