The historic restaurant on the cliffs of Telegraph Hill, Julius' Castle, in operation from 1924 until a decade ago, may finally be reborn as a restaurant with the help of a development team led by Paul Scott. The Examiner took note that the proposed restaurant revival is being taken up today by the Planning Commission, and we should have word within hours as to how they vote  but the Planning Department has already recommended that it be approved.

That's not making some Telegraph Hill neighbors very happy, however, since they've now enjoyed 10 quiet years without a restaurant in their midst, or tourists trying to park on their hill so they can go have dinner. The Ex quotes a letter from another real estate developer who happens to call the tony neighborhood home, Oz Erickson of the Emerald Fund, who writes, "I have been in the position of the developer... Mr. Paul Scott, many times. I empathize with him greatly. I thus hate to take a formal position opposing his project, but since I live at 1400 Montgomery, just up the hill from Julius’ Castle, I would not like to see it reopen as an operating restaurant. The problem is traffic."

Erickson claims that the 180-degree turn at the end of Montgomery Street is a place where cars often get themselves stuck, though perhaps he's already forgotten that this place was an 83-year-old restaurant as of just ten years ago. 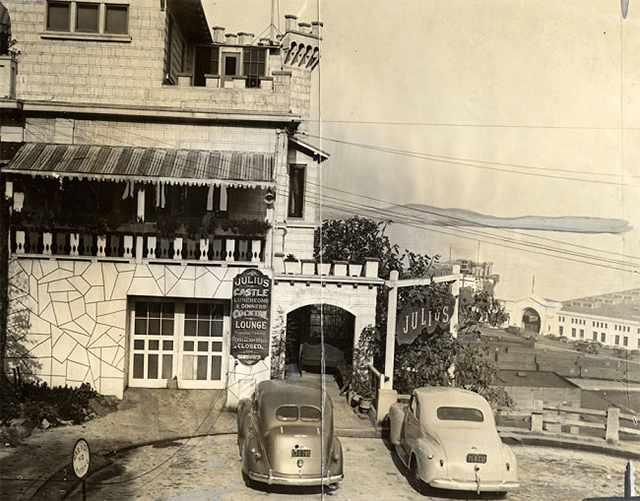 City planners have already given it the thumbs up, separately writing, "The proposed restaurant will not adversely affect traffic or parking in the neighborhood. A restaurant operated in this location for approximately 85 years, and the new operations plan proposed by the applicant will help to calm traffic."

The place has a lot of history and its rebirth will delight many a longtime San Franciscan. As FoundSF writes:

Rarely does one find a castle clinging to a hill in the center of an urban area. Julius’ Castle, at 302 Greenwich St. where it meets Montgomery Street, is the exception. The castle, while certainly well built (although not quite “fortified”), was the residence and business establishment of a beloved San Francisco “noble” by the name of Julius Roz. Julius’ Castle was a leading San Francisco restaurant for more than 87 years, and is San Francisco landmark No. 121, designated as such on Oct. 5, 1980.

Roz was an Italian-American restaurateur, and he apparently lined some of the interior with wood paneling he bought from the city’s 1915 Panama Pacific International Exposition. After Roz's death in 1943, the restaurant passed through a number of owners, always retaining the same name, and always keeping a table reserved for the mayor. Celebrities who dined there include Robert Redford, Cary Grant, Sean Connery, Marlon Brando, Ginger Rogers, and famed Mount Everest climber Sir Edmund Hillary.

It's unclear why it's laid dormant since closing in 2007, but it's welcome news that it might live again. Scott, who also lives on Telegraph Hill, purchased the property in 2012, and says he hopes to have it reopen within the next year. "It’s a special place,” says Scott. “It’s old-time San Francisco.”

An historic photo of Julius' Castle, via SF Public Library

It's a first-of-its-kind three-day comedy festival in San Francisco, and we've been talking about it for months now, but it's now here, starting Friday, June 2: Colossal Clusterfest. A lot of Bay Area

Chris Bleidorn, a former chef in the kitchens of three of San Francisco's most acclaimed restaurants with a combined total of eight Michelin stars, Saison, Benu and Atelier Crenn, is breaking out on

—
Julius' Castle May Finally Reopen On Telegraph Hill, Despite NIMBY Objections
Share this