It's a first-of-its-kind three-day comedy festival in San Francisco, and we've been talking about it for months now, but it's now here, starting Friday, June 2: Colossal Clusterfest. A lot of Bay Area locals probably haven't figured out that this is even happening yet unless they're die-hard Comedy Central or Broad City fans and follow them on Insta or whatever  or unless they're regular readers of SFist, ahem. And because this is a new festival in its first, unproven year, there are still tickets available. But today I got a brief preview of the festival grounds in SF's Civic Center Plaza, which includes all of Bill Graham Civic Auditorium, and for comedy fans this should be a pretty exciting thing.

The festival, which if all goes well could be an annual thing in San Francisco, is being put on by Comedy Central, who partnered with Bonaroo producer Superfly and Another Planet Entertainment. Kent Alterman, president of Comedy Central says, "We've been a part of a lot of festivals, and we've curated stages at festivals like Bonaroo, but this is the first time that there's been a truly fan-centric, comedy-driven festival on this scale." Alterman says that multiple cities were discussed in the early planning stages of Clusterfest, but "quickly San Francisco became the obvious choice, not just because comedians love to perform here and we've filmed a bunch of specials here because of that, but also because of this city's great history of nurturing comic talent."

The festival has a music component as well  check out the full daily schedules here  with acts like Ice Cube, Chromeo, and Tegan & Sara being the biggest. But primarily the festivals five stages will feature three nights and two days of wall to wall stand-up and comedy-driven programming, with headliners Kevin Hart (Friday), Bill Burr (Saturday), and Jerry Seinfeld (Seinfeld), and other Comedy Central celebs including the ladies of Broad City doing a live reading of Wayne's World with help from the likes of Tig Notaro.

There are some highly Instagrammable "activations" now being built in Civic Center as well, including the South Park Experience, highlighting 14 iconic episodes of the show (including a human-sized jar of member berries)... 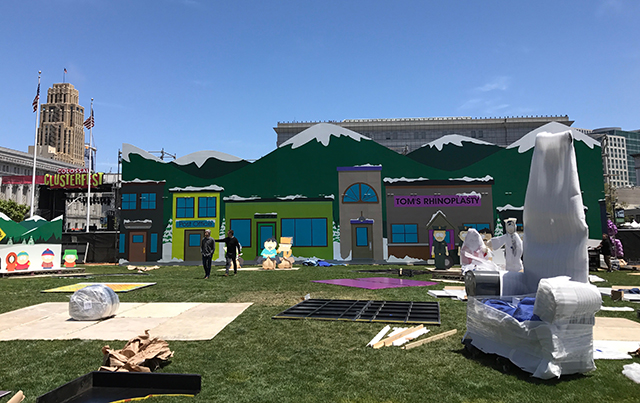 ... and an exact replica of Jerry's apartment from Seinfeld, built with the help of Warner Brothers' prop archive, including a Festivus pole where grievances will be aired, and a vintage Apple 2e ... 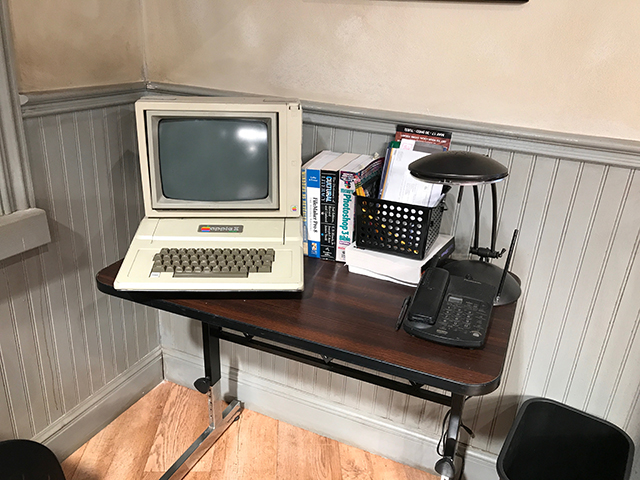 ... and Paddy's Pub from It's Always Sunny In Philadelphia, which will serve as a full-service bar and restaurant inside of Bill Graham, in addition to having activities on the stage all weekend like It's Always Sunny trivia, and, of course, Flip-adelphia. They've also got TV screens in there where they'll be showing the Warriors' game on Sunday. 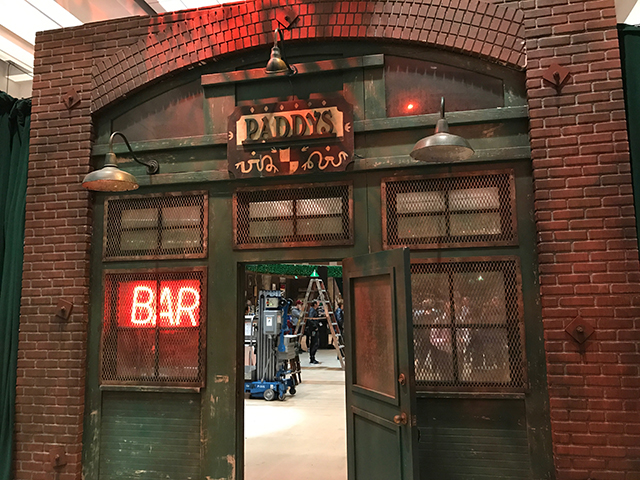 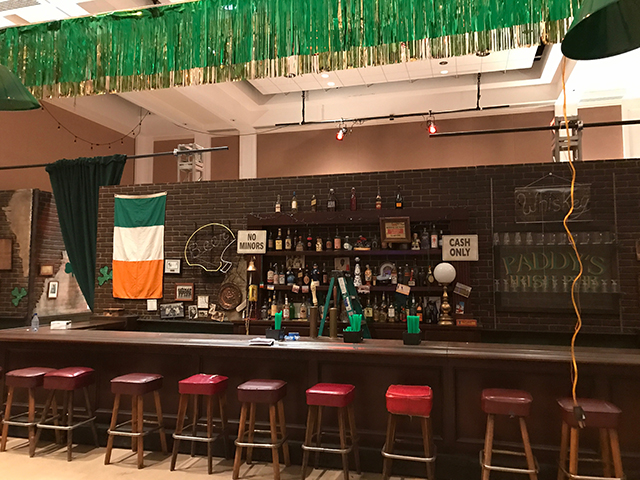 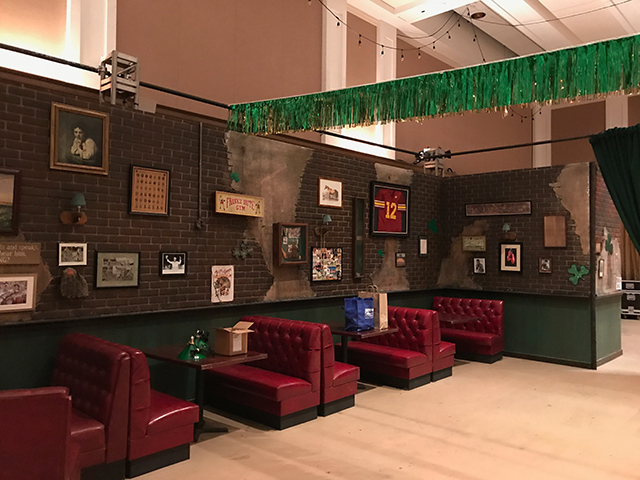 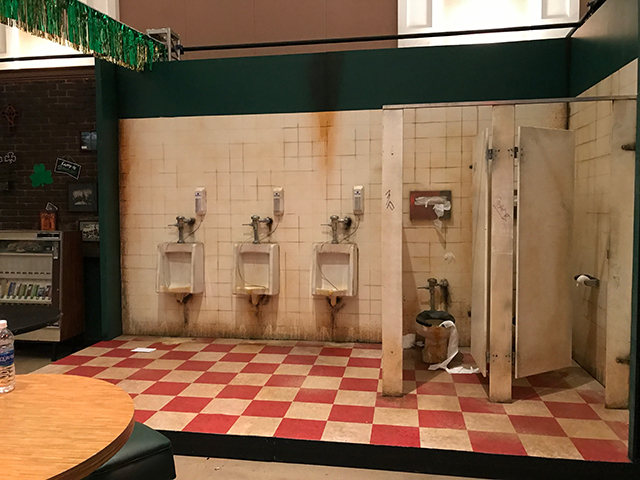 Upstairs in Bill Graham in Room 415  where Robin Williams famously performed during a Grateful Dead show once  Comedy Central is hosting an intimate, small-scale stage for up-and-coming comic talent. There's also a smaller stage they're calling the Larkin Comedy Club where podcast talent from 2 Dope Queens and How Did This Get Made? will be on stage.

In between, attendees will be treated to food from local vendors, a wine tent featuring mostly Napa Valley wines (and Claypool Cellars champagne being served out of the back of a vintage 1969 El Camino), as well as themed food booths including replicas of the Soup Nazi (the actor who played him will actually be serving soup) and Tom's Restaurant from Seinfeld, and tongue-in-cheek versions of South Park restaurants like Casa Bonita (with actual Mexican food from Tacolicious), and Whistlin' Willy's pizzeria/arcade. 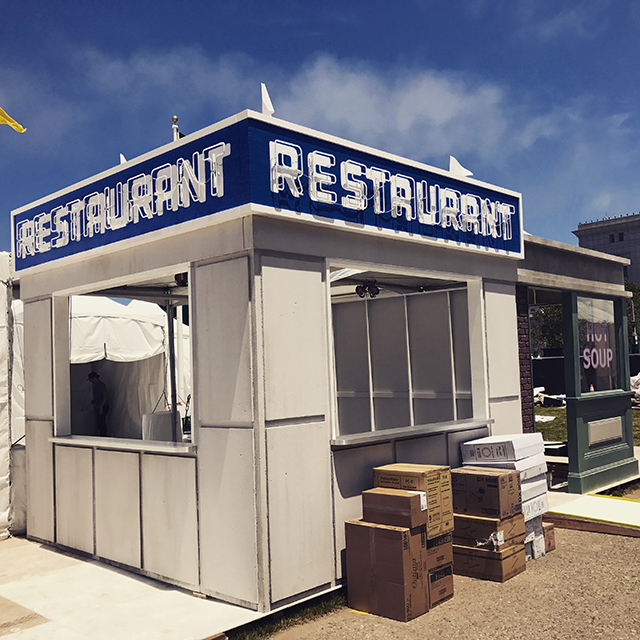 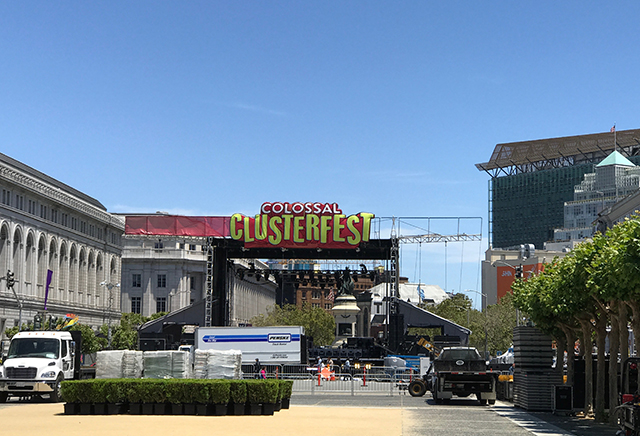 Jonathan Mayer of Superfly explains that the name, Colossal Clusterfest, was meant to be fun and of course call to mind the "clusterf***" of different kinds of entertainment  but hopefully, for the crowds attending, it won't be a cluster of an experience. "There were a lot of names we rejected," he says.

They still can't say how many people will be in attendance  the main stage is set up with plenty of room to spread out on Civic Center Plaza, and Bill Graham, with seating set up on the main floor, can hold 6,000 at a time. But suffice it to say that word's going to get around about this thing if it hasn't already. 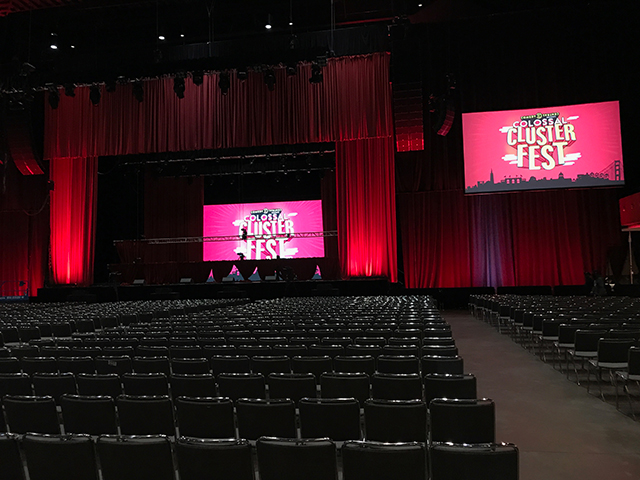 Business is booming for TV ads that blame San Francisco for America's ills, as another such spot is hitting the statewide airwaves this week. Don Rosenberg, seen above, lost his son Drew in

The historic restaurant on the cliffs of Telegraph Hill, Julius' Castle, in operation from 1924 until a decade ago, may finally be reborn as a restaurant with the help of a development team