Are you the "master" of your UberPool?

Leaked internal documents obtained by Buzzfeed reveal some of UberPool's weird terminology, and the company's total hemorrhaging of money, passengers, and drivers. (We've known these prices were too good to be true, and SFist explored UberX's pricing changes just last week.)

According to these leaked documents, UberPool, the multi-passenger ride-sharing arm of Uber, was at times losing up to $1 million per week  all in a quest to beat competitor Lyft Line. The documents reveal the numerous cash-burning strategies UberPool tried in an attempt to ease the losses since the company launched carpooling service in 2014.

Basically, the only way UberPool is profitable is if the Pool ride has both a "master," aka; the first passenger on the ride, as well as at least one "minion," a second rider. Ideally rides would have more than one "minion." According to Uber, they've since changed this (Dungeons & Dragons-esque) terminology.

First, it was UberPool's algorithm that needed vast improvements to get shared rides working more efficiently, but when the math got better, UberPool was still losing money. The company began with a "match rate" of 7.9%, meaning only 7.9% of Pool rides had both a master and a minion. After nine months in business, UberPool's match rate was 60%. And still, money was flying out the window.

"HQ was telling us we could not be burning the amount of money we were. We couldn't just give out subsidies that high anymore," explained a former employee. 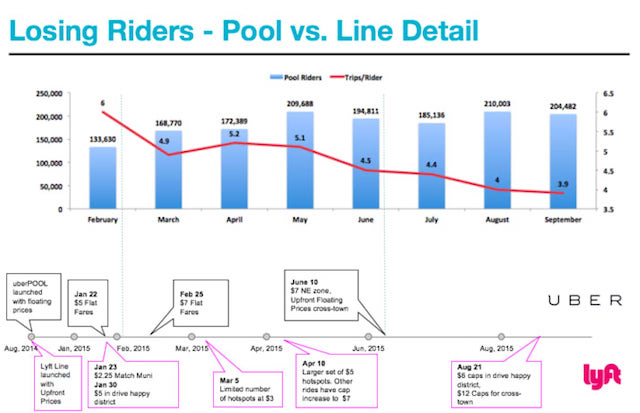 "Every time we did something to reduce burn, our ridership went down. The riders were just so used to getting discounts," a former Uber employee told BuzzFeed.

Well, yeah. Door-to-door service from the Mission to the Marina for $3.99 is absolutely worth squeezing into an immaculate Ford Focus with a stranger or two.

Next, Uber decided to raise its "safe ride fee" by 35 cents. "Safe ride fees" were theoretically supposed to cover the cost of driver background checks but really, the money was used to bolster UberPool's crummy numbers. Uber was then sued for false advertising in a lawsuit which they later settled. Poof! More money gone.

Meanwhile, many Uber drivers hated UberPool, claiming that the whole concept was a "losing proposition." But Uber went to great mathematical lengths to convince drivers that by accepting Pool riders, they'd be making more money than by simply driving for Uber X. As it turns out, the math was a stretch and Uber had to fork over $20 million to the Federal Trade Commission on charges that it misled drivers about potential earnings. Poof poof!

Uber's CEO Travis Kalanick came up with an idea for people to trade in their cars for Uber credit, but the plan never came to fruition. Instead, the company has inked deals with transit agencies and cities across the country to subsidize Uber rides.

None of this has been resolved. Uber and Lyft, not to mention a bevy of occasional new, smaller ride-sharing competitors, are still battling the market out, trying to win the ride-share game. Why? According to New York University Arun Sundararajan, there are big bucks to be had in self-driving ride-share cars.

Sundararajan told Buzzfeed, "The justification in their mind is if you make that investment now ... the investment will pay off. And the person who's the leader when that happens is going to be sitting on a multi-hundred-billion-dollar market. This is why they raised so much money, and why they're spending it the way they are."

Related: Cruising UberPool And Lyft Line For Dates Appears To Be Trending

The long stagnant and/or transitioning food scene around Oakland's Jack London Square  where a the 434,000-square-foot waterfront development was built almost a decade ago with a vision of Ferry Building grandeur

An East Bay man who volunteers at the popular Cat Town cat cafe in downtown Oakland spent part of his Memorial Day weekend in a cat costume, circling Lake Merritt on foot for

—
Not Surprisingly, UberPool Has Been A Major Loss Leader
Share this