If you could go back in time to a San Francisco era you didn't live through, when would that be?

This one is easy. Whenever I fantasize about going back in time — once I get past the daydream about reliving my 20's with all the wisdom and knowledge I have now, and thus not wasting my youth on any number of people and things — I dream about living in the 1940s and 1950s, for two main reasons: The clothes, and the nightlife.

Now, I can (and often do) just dress like I'm living in another era, but what I usually can't do is visit some of the amazing haunts that were all over the city in decades past. Granted, there are still a few treasures here and there (and here's a previous post discussing some of them), and I'll gladly take in dinner at Tadich, drinks at the Tonga Room, or a show at Bimbo's any time. But I still long for the days of bars and nightclubs with names like Nut Club and the Blue Lagoon.

Fodder for these fantasies is usually vintage local ephemera, like the one featured below. A friend gave me this amazing little bit of folded advertising from the 1940s. 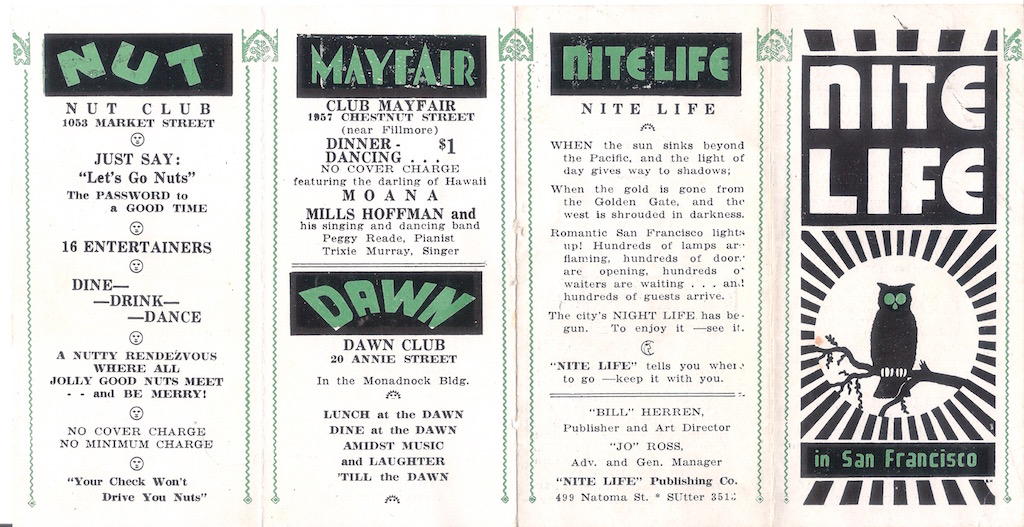 Look at the Nut Club! "Just say 'Let's Go Nuts' the password to a good time!" "A nutty rendezvous." "Your check won't drive you nuts." I mean, come on. Someone needs to reopen this place, stat; it's not like there's anything great going on at 1053 Market now!

I mentioned Bimbo's above, and if you've ever wondered why it's called Bimbo's 365 when it's neither open 365 days a year nor located at 365 Columbus, it's because it began as a club at 365 Market Street before moving to North Beach in 1951. The back of this little leaflet includes some details about that original location. 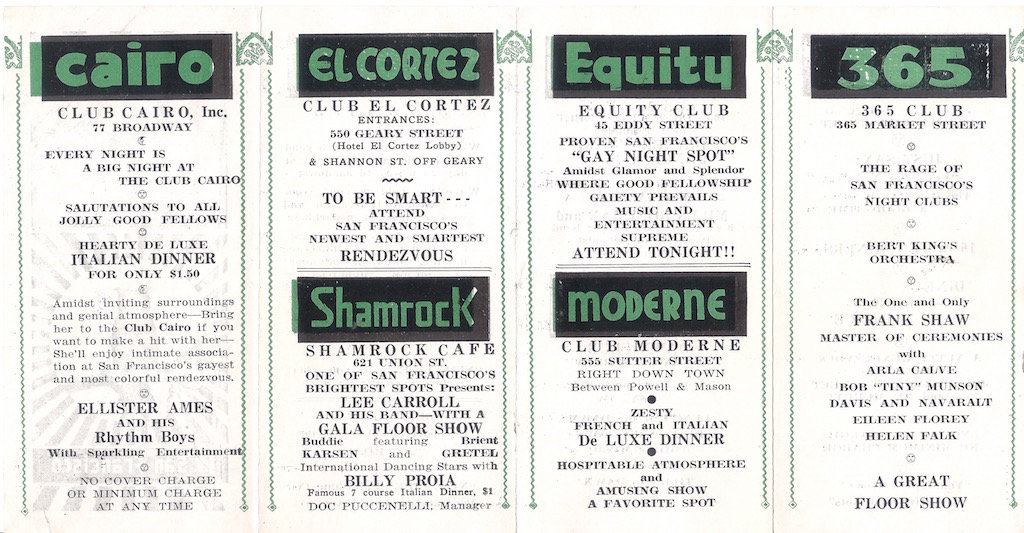 Here's another old place I've always been obsessed with, and one I actually have some memories of seeing when I was a kid: Bernstein's Fish Grotto on Powell Street, which had a storefront with what looked like an actual ship emerging from the building, and a similar ship-themed interior. 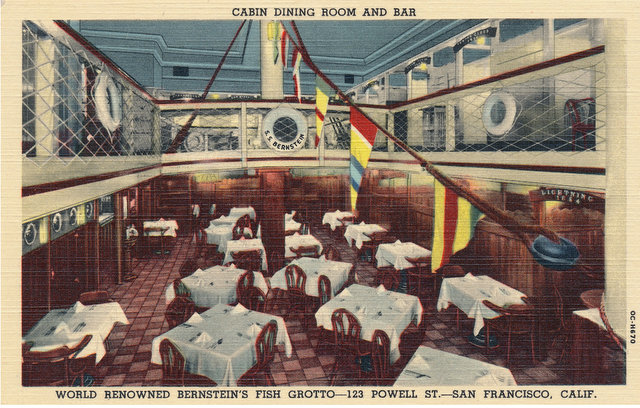 I'm not sure if I ever actually ate there, but I do remember seeing that ship during many trips downtown. The restaurant closed in 1981, and contrary to what the Wikipedia entry says, the building that housed it is where the Uniqlo is now, not the Walgreen's. 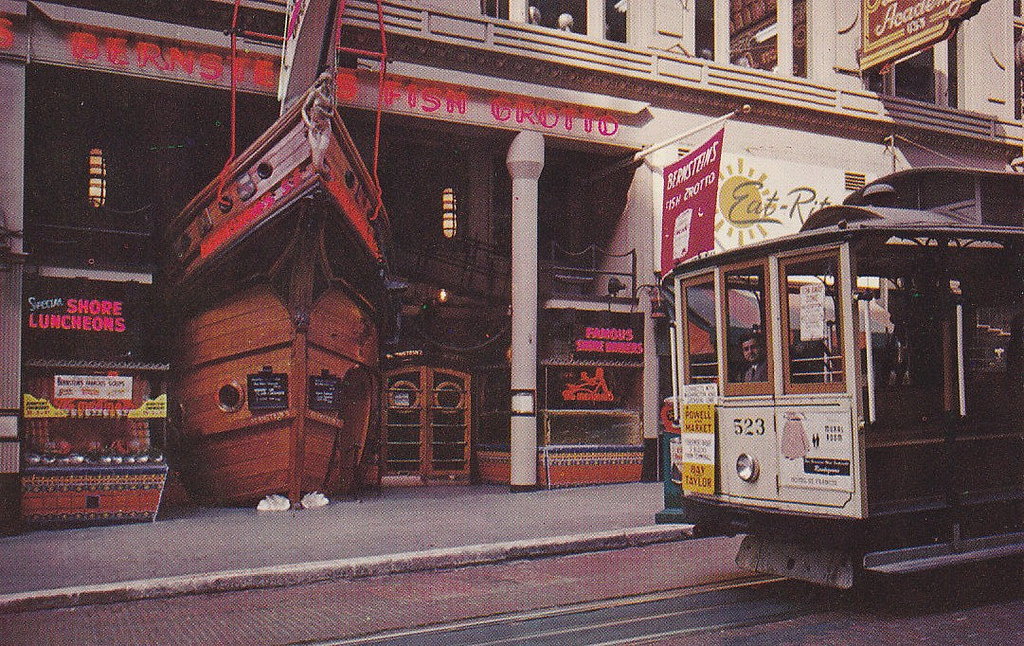 So great, I've traveled back in time, and now live in 1940's San Francisco. What kind of job am I going to get?

Well, I've got that figured out too. I'll be a professional escort!

Wait, wait, hear me out! I have another bit of ephemera gifted to me by a friend: A San Francisco escort guide from 1940. And the way this thing makes it sound, escorts you found through this guide were just escorts, who would show you all the hot spots in town, and then end the night with nothing more than a handshake. 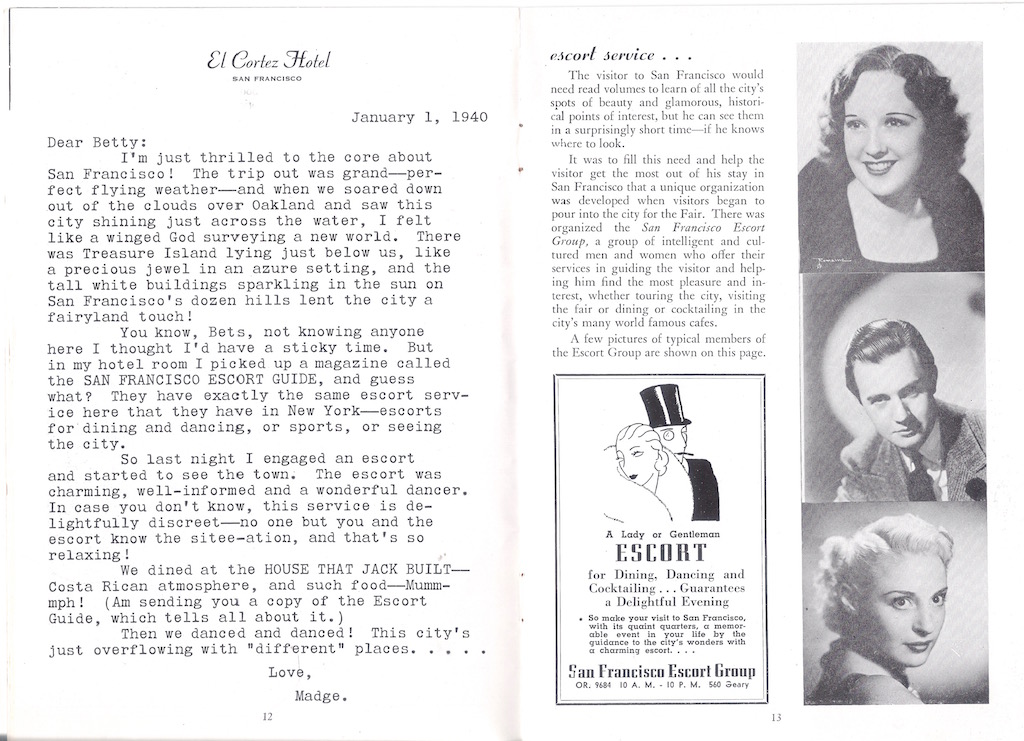 OK, fine, the expectations customers had for these escorts were probably not much different than what is expected today, but this is a fantasy, so in my mind it's the perfect profession: Someone pays me to take them to fun nightspots and I don't have to end the evening making out with a half-drunk chainsmoker from Poughkeepsie!

And with that let me leave you with this little time capsule: a CinemaScope tour through 1955 San Francisco, a viewing of which is probably the closest we'll ever get to actual time travel in our lifetime.

A man in an apparently "agitated" state got out of his vehicle and climbed onto one of the center support structures of the Bay Bridge Wednesday morning, causing the closure of two westbound

Our show @13reasonswhy came out tonight and I couldn't be more overwhelmed with pride and joy. After 7 years of holding onto this book, I couldn't of picked a better time for this

—
Ask A San Francisco Native: If You Could Go Back In Time...
Share this