The annual Straight Pride celebration known as Bay to Breakers goes down Sunday morning at 8 a.m., and as has been the custom for a number of years, SFist comes through with our proprietary Bay to Breakers Liquor Store Map to help you find corner stores and markets to replenish your ever-disappearing stock of beer, wine, liquor, cigarettes, and sundries on the race course. Sure, it is plain as day that many liquor stores are located right along the first half of the course on Howard and Hayes Streets  but once you turn on Fell Street and head into the Panhandle and Golden Gate Park, you will not encounter any more alcohol-selling establishments for the remainder of your Bay to Breakers trek. That’s where’s the map below comes in, navigating you from the parks to the closest corner stores.

The map can be accessed easily on your smartphone with the bit.ly link bit.ly/b2bbooze or by expanding on the map above. (An Android device will load it as a Google Map automatically, an iOS mobile device will require having the Google Maps app). The red stars are liquor stores, “little blue dot” will appear in Google Maps to show you where you are in relation to the nearest liquor store when stuck in the deep, remote regions of Golden Gate Park, and you can click on the Legend button for the specific names and addresses of the liquor stores. 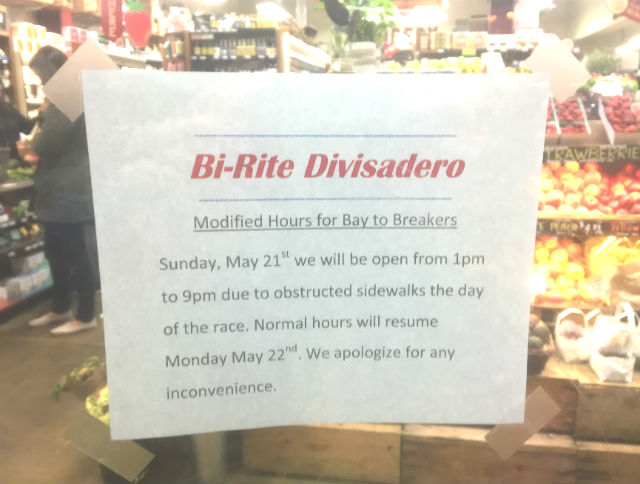 There are some new developments in this year’s Bay to Breakers liquor store landscape. As you can see above, the Bi-Rite Divisadero right on the race course will not be open to serve the drunken fools running Bay to Breakers. Oh, they had their fun back in 2013, replacing shelves of food with more and more booze, but this year they won’t open til 1 p.m. because of “obstructed sidewalks”. (Which makes no sense! There will be steel barriers separating the street from the sidewalk! The barriers are there specifically so businesses can remain open!) 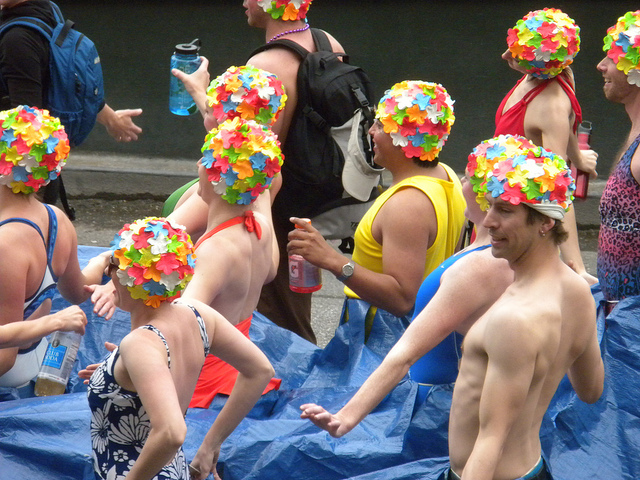 Do be aware, though, that police presence at Hayes Hill makes this area the most dangerous spot for carrying an open container of alcohol, and of course its neighbor Alamo Square Park remains closed and gated off until next week.

We do encourage runners to please employ some manners. Do use the porta-potties instead of peeing in the parks and streets  if you urinate in public, Stanley Roberts will put you on television. And you should register if you haven’t already, with in-person registration available Friday and Saturday at the Bay to Breakers Expo (Pier 35, 1453 Embarcadero). If you actually manage to finish the race, Muni is adding extra 5X, 5R and NX routes to get your drunken ass back to more recognizable parts of town, though I will advocate for simply turning right around and walking on foot reverse-ways on the exact same race course, and watching the people drunker and slower than you try to inch toward the finish line. There are always people drunker and slower than you.

Related: How to Do Bay to Breakers

A proposal for a 120-unit supportive housing facility for formerly homeless people in the Mission Bay neighborhood brought a flurry of public comment on the "no" side Thursday evening. KRON 4 attending the

I was too young to see the first when it was in theaters, which means I missed out on its initial visceral impact. So for years, Aliens was my favorite Alien movie, fueled