As XBiz reports (link NSFW), the setting for Damn Fine Pie! is the brothel and casino over the Canadian border called One-Eyed Jacks, which figures into the original TV series. And building off of the plot of the series, the porn parody centers on the character of Audrey Horne (played by Amber Ivy), who goes to One-Eyed Jacks to try out prostitution, curious about the dark side of her dead friend Laura Palmer's life. There she runs into a group of male characters that will be familiar to fans of the show: Dr. Jacoby (Tommy Pistol), James Hurley (Owen Gray), Bobby Briggs (Will Havoc), Ben Horne (Mickey Mod) and Leo Johnson (Jon Jon). And they have a gang bang.

"What could be a more fitting end to the surreal decade we spent at the Kink castle than a tribute to this dark, cult series?” says director Maitresse Madeline Marlowe. "As a huge fan of surrealist films, David Lynch has played a pivotal part in forming my artistic spectrum. Being able to shoot a parody of my favorite TV show is absolutely a high point as a director."

She adds that after the shoot was over the cast and crew had "a champagne toast to the final farewell film at the Armory." 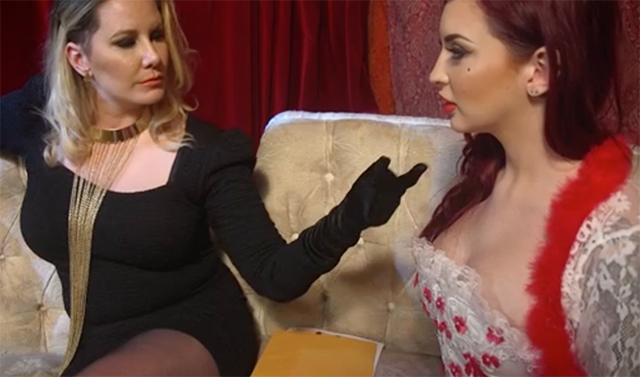 For the past decade, the Armory has been a brick-and-mortar incarnation of the Marquis de Sade's wet dream. It's a place where all manner of fetishes, from the grotesque to the glamorous, were explored in unrelenting detail. More than 8,000 pornographic films featuring everything from erotic waterboarding to "enema debutantes" were made here, in San Francisco's Mission neighborhood. This is where Kink hosted dozens of classes and workshops on topics such as electroplay and the art of rope restraint, along with sex-positive events and parties. The Armory wasn't just an illicit landmark  the 200,000-square-foot edifice was a bastion for some of San Francisco's edgy sex cultures.

Vice says that Kink's move out of town after a decade in the Mission is "symptomatic of broader trends of the Silicon Valley-fueled gentrification pushing sex-positive spaces out of San Francisco," but Kink founder Peter Acworth was more pragmatic in talking about it to the Chronicle earlier this year. “Porn is not nearly as profitable as it was,” he said. “We have had to change our business model.” He noted the incredible expense of maintaining the building without having things like concerts and other tenants to pay the bills. He estimated that the building still needs somewhere between $13 million and $20 million worth of upgrades to be brought up to code, and such expenses will have to be paid by bringing in new tenants.

Kink is still maintaining its offices on one floor of the historic Armory, and nightly tours in the space, and its creepy basement sets, will continue for the foreseeable future  at least that's what Acworth was saying in January.

Previously: Kink.com Moves Production Out Of Armory Because They Want Potential Tenants To Be Less Scared


Maitresse Madeline as Blackie and Amber Ivy as Audrey Horne.

Russian Hill better brace itself, because an ambitious sounding new restaurant/supperclub is headed that way this fall, and it's not like anything we have in the city right now. Not since Supperclub

A man who lives just steps from the University of San Francisco is either a very light sleeper or has a very loud garage door — but whatever the case, it's that attribute that