A 38-year-old Forestville man has been identified as the "likely" culprit in a chilling double murder on a Sonoma County beach that has remained unsolved since 2004. Sonoma County Sheriff Steve Freitas gave a press conference Friday, as ABC 7 reports, saying that investigators had been questioning Shaun Gallon in connection with the fatal shooting of his brother, and he revealed details in the 2004 case that no one could have known besides investigators or someone involved in the killings.

The murders of Lindsay Cutshall, 22, and her 26-year-old fiancé Jason Allen, both youth counselors at a Christian camp near Sacramento, shocked the Bay Area because of their seeming randomness. Both were found shot at close range, still wrapped in their sleeping bags where they were camping on a beach in Jenner in August 2004, with no signs of struggle or robbery.

"We feel confident we have Jason and Lindsay's killer," Freitas said at Friday's news conference, saying that they were not confident they would get a full confession from Gallon, but that he had begun revealing the incriminating details during recent questioning in his brother's death. He's been held in jail since March, and has a varied rap sheet that includes being in prison for three years after shooting an arrow through the window of a car, injuring a man inside.

As the Chronicle reports, Gallon had long been considered a person of interest in the case, but there was never enough evidence to charge him. Though the killings of Cutshall and Allen had seemed random, it's now possible that Gallon had had some interaction with the pair before allegedly returning to take their lives. They were both shot with a .45-caliber Marlin rifle as they slept on Fish Head Beach near the mouth of the Russian River, and Sonoma County investigators now say they have corroborating evidence that could connect Gallon to the crime.

Gallon would have been 25 years old at the time of the killings, and since then he's been arrested on multiple occasions, and was referred to as a "survivalist" during his trial in the 2009 arrow shooting, which happened near Guerneville.

He's got a predictably disturbing Facebook page with a lot of ALL CAPS posts about sex and world conflict, and photos like the ones below showing off various survivalist gear. 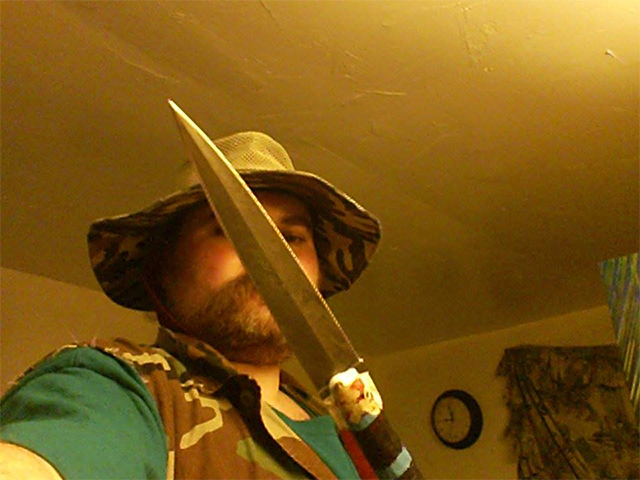 Also, predictably, former neighbors in Guerneville, where the Gallon brothers lived until recently with their elderly mother, referred to Gallon as "quiet," and one next-door neighbor, Andrea Hill, said, "You could kind of feel something heavy here when I moved in."

Even though he will still have to go trial, Gallon's arrest is cause for some celebration, says Freitas. "I think there’s a lot of joy and happiness that it’s been resolved," he said.

This one came with the caption "CHECK OUT THIS NICE SPEAR I MADE." Photo via Facebook

The cast and crew have finally arrived to do location shooting at the Winchester Mystery House in San Jose for the upcoming thriller Winchester, starring Helen Mirren. Mirren tells CBS 5 that filming