It's (almost) 4/20, man. So, if you still require such an excuse to indulge in marijuana amongst friends and strangers, you'll be doing so on Hippie Hill on Thursday  the first time ever that this previously mostly illegal event will be totally legal, and even permitted by the city, if still likely to leave behind a mess. Whether you head out there or not, if you like weed and tend to get the munchies, the list below will update you on all the latest stoner-friendly delights you can indulge in around town  and you can also refer back to this still very useful list from 2016.

Boudin Balls at Alba Ray's
Along with items like BBQ Creole shrimp and beignets with salted caramel sauce, these fried boudin balls at Alba Ray's bring the party to this new New Orleans-inspired bar and restaurant in the Mission. Served with pickled okra and house Creole mustard aioli, the boudin balls are one very hot, very rich bite of pork and rice sausage crisped to perfection. Depending on your level of, shall we say, appetite, you might want a few orders for the table. —Caleb Pershan
2293 Mission Street between 18th and 19th Streets 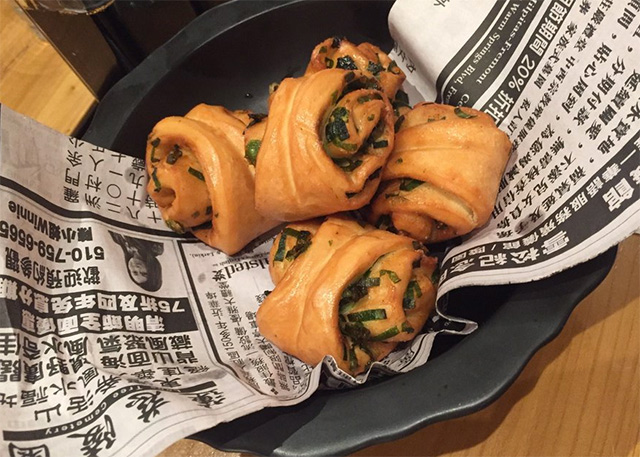 Basket Of Fried Scallion Bread at China Live
There's a lot on the menu at this new, bustling Chinatown food and retail complex that will pique a stoner's interest, not the least of which is the bowl of sesame soft-serve ice cream that comes topped with mango shaved ice and bursting lychee boba balls and peanut and chocolate crunch balls. But this basket of fried twists of scallion bread, reminiscent of the delicious scallion pancakes I used to eat many of in college, are definitely worth a special trip if you're experiencing the effects of 420 in this 'hood.  Jay Barmann
644 Broadway at Stockton 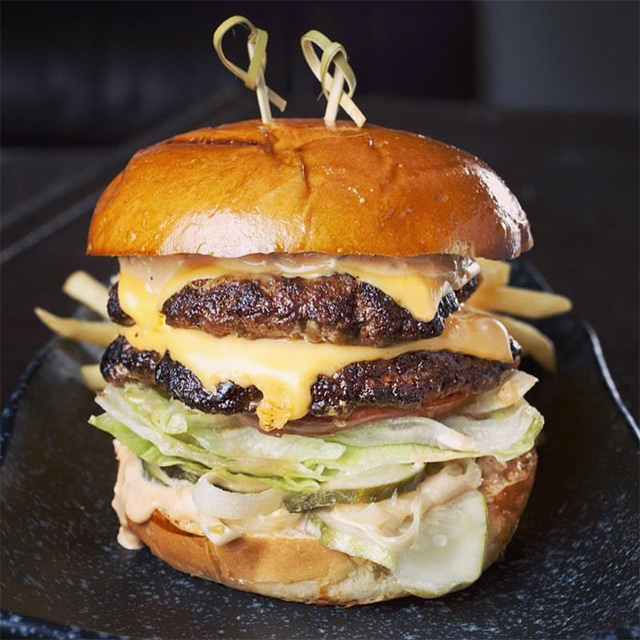 The Finn Town Burger With Extra Fries
Both the burger and fries are excellent at this new Castro tavern, with the burger a glorious, gooey, sloppy, double cheeseburger slathered in special sauce and loaded with pickles and onions. And if you are, indeed, stoned, you may need an extra bowl of their perfectly crispy shoestring fries, with peppercorn ranch for dipping. Incidentally, they'll be doing their own pot-themed party on Thursday starting at 5 p.m., with special drinks like the Jerry Garcia-inspired Captain Tripps, and a looping screening of Cheech and Chong's Up In Smoke.  Jay Barmann
2251 Market Street between Noe and Sanchez 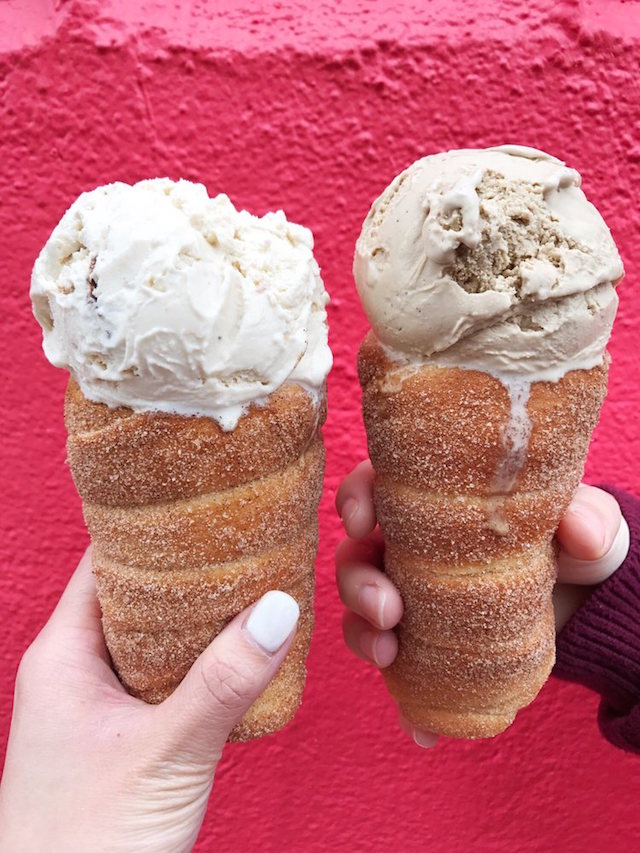 Sandy B. via Yelp

Chimney Cone At Garden Creamery
Garden Creamery only serves its Instagram-famous chimney cone on Saturdays from 2 to 4 p.m., but that just adds to the food item's growing cult status. To be precise, the cone is a cinnamon sugar chimney cake that's the ideal stoner vessel for scoops of fresh ice cream. Garden Creamery's roaming truck gained a following for its small-batch Hawaiian and Asian ice ream flavors — several varieties of coconut and matcha are usually on offer — and its MissionBrick and Mortar is already doing a swift business. Pro chimney cone tip: Get a paper tray to take with you, just in case you have to set it down. Waste not, want not. —Caleb Pershan
3566 20th Street at Lexington Street 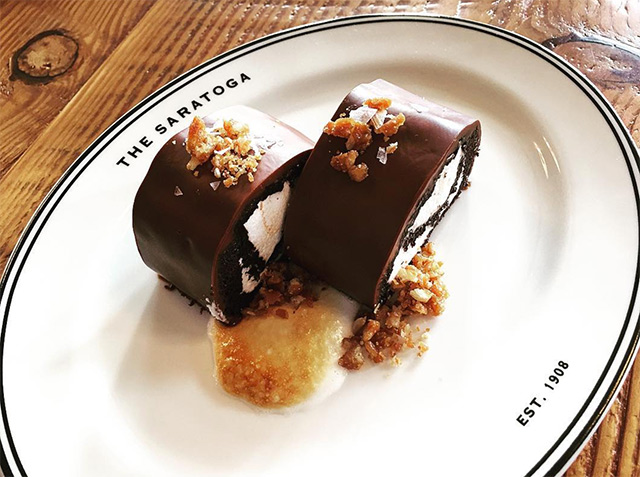 Grown-Up Ho-Hos At The Saratoga
While everything from the fries, to the tater tots, to the burger and the Cubano frank at this new Tenderloin spot are going to strike any stoner's fancy, the Grown-Up Ho-Hos on the dessert menu are going to bring the biggest, silent smiles to the table. They're like mini ice cream cakes, actually, made with chocolate roulade rolled with vanilla ice cream, iced with chocolate ganache, and garnished with candy brittle.  Jay Barmann
1000 Larkin Street at Post 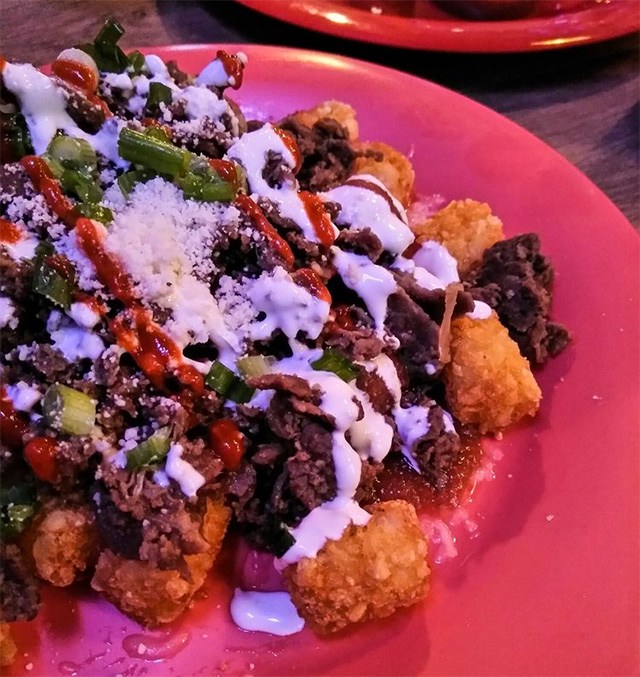 Korean-Style Tater Tot Nachos At Tacorea
Tater tot nachos, which are not original to this place, are basically Stoner Food 101, but where else but this Korean-style taco spot will you find them topped with bulgogi "asada," cheese, salsa, guac, crema, cotija, and gochujang?  Jay Barmann
809 Bush Street between Taylor and Mason

Any of the Ice Cream Pies at Tartine Manufactory
You want to feel like a kid again? Just go to Tartine Manufactory and order one of their ice cream pies (or if you've, perhaps, over indulged in the weed you can just take one to go and enjoy it in the privacy of your bed). These amazing, indulgent things, which are big enough for three or four people to share (or two very stoned people), created by Tartine pastry goddess Elisabeth Prueitt, consist of small pie shells filled with Tartine's house ice cream, then dipped whole in chocolate or another coating, and they come topped with various sauces  the one above is fior di latte and passion fruit ice cream topped with coconut and caramel, but I also had one that was Rocky Road flavored that was pretty rad. Not recommended for just one person, but I suppose you could do worse.  Jay Barmann
595 Alabama Street near 18th 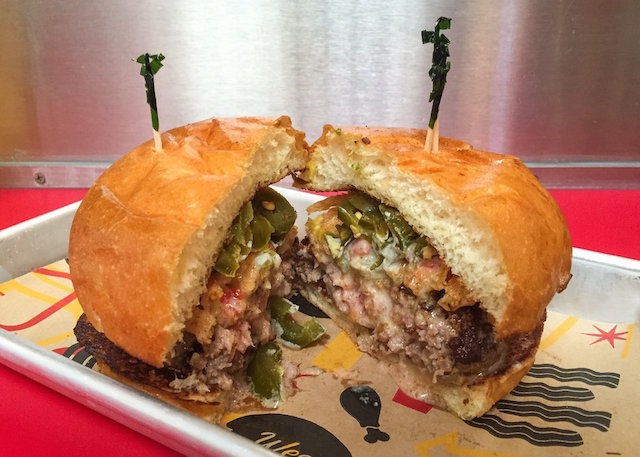 The Hot Wes at WesBurger 'N' More
A burger inspired by Jack in the Box certainly qualifies as stoner food. So it is with Wes Rowe's cast-iron skillet-cooked burger the Hot Wes, inspired by that fast food chain's "Hot Mess." It's topped with onion rings, queso, and pickled jalapeños, and tater tots on the menu seal the stoner snack deal. -Caleb Pershan
2240 Mission Street near 18th

The California State Auditor has taken on the cause of those disabled placards issued by the DMV, the validity of which many a TV news magazine and local news broadcast have questioned over

—
The 8 Best New Stoner Foods In San Francisco
Share this