Alamo Square will reopen on May 24, 2017 at 11 a.m., Rec and Park project manager Brett Desmerais confirmed to the Alamo Square Neighborhood Association yesterday. In a non-coincidence, that's three days after Bay to Breakers (May 21), the yearly footrace and drinking parade that's been known to roll through Alamo Square and the Panhandle like a hammered tornado. For visual reference: 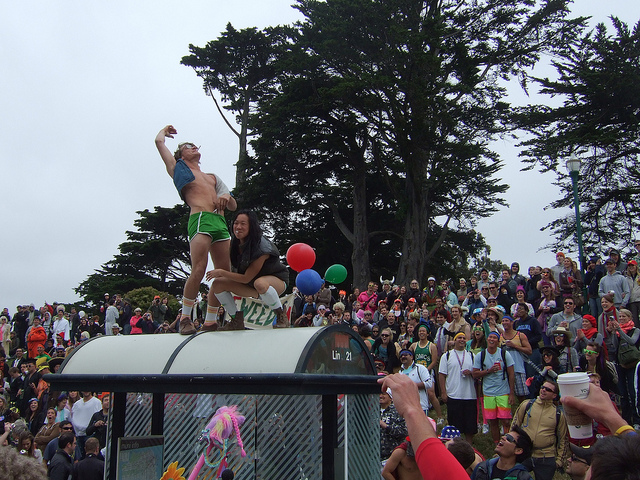 Alamo Square, endlessly photogenic with its downtown views foregrounded by pastel Victorians, has been closed since May 10 of last year for $4.3 $5.3 million in renovations — although by popular demand, a viewing area has remained open during the closure. A reopening was last predicted for "late winter," but the project's completion has been repeatedly delayed by persistent rains that doused sod and tested its new irrigation and drainage system — antiquated infrastructure was a primary reason for the upgrade.

"The existing irrigation system which was more than 30 years-old and the quick coupler line was more than 70-years-old, were corroded and fraught with leaks," SF Rec and Park spokesperson Joey Kahn tells SFist. According to Hoodline, who drew attention to the new opening date, there's been $1.2 million in additional construction in 2017.

The bulk of funding for the project comes form 2008 and 2012 voter-approved bonds, and more funding was provided by a conservation grant from the SFPUC — the new irrigation system is expected to save water by 33 percent — and $130,000 in funds for new trees was crowdfunded by the Alamo Square Neighborhood Association. 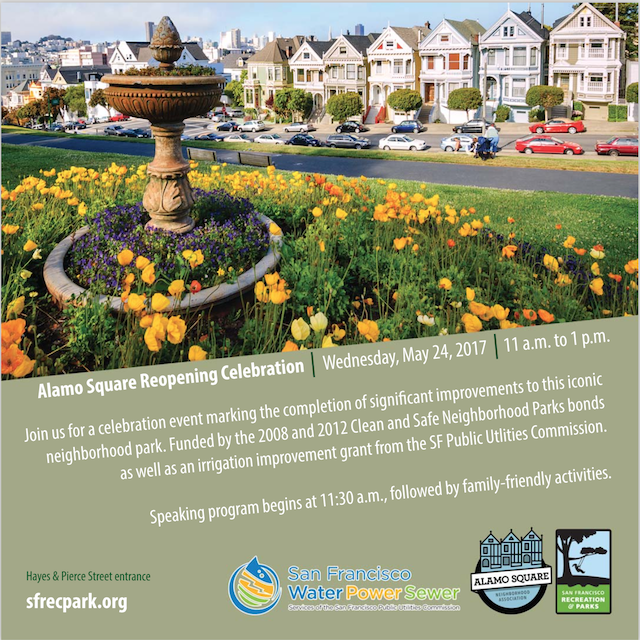 via the Alamo Square Neighborhood Association

Clearly concerned by the frequently-trashed Dolores Park, the neighborhood association has launched a pledge campaign for Alamo Square neighbors and park goers to pick up after themselves and take care of the park. That's nice — but the decision to hold off on opening the space until after Bay to Breakers will probably have a more measurable effect.

Whip up delicious meals without shopping or planning. Sometimes the biggest challenge to making a home-cooked meal is all the prep work that goes into it. For busybodies who still want to enjoy

The San Mateo Sheriff's Office is warning residents to lock their doors and windows, after a mountain lion entered the bedroom of an area home and took off with the family dog as

—
Alamo Square Reopening May 24, Not Coincidentally 3 Days After Bay To Breakers
Share this