I imagine you've ridden Muni for a lot longer than many of your readers, so I want to know, what has been your worst Muni riding experience?

I'm probably jinxing myself by writing this, and will be stabbed on my next Muni ride, but the honest truth is, I don't have any really bad Muni horror stories! I haven't been mugged; I haven't witnessed any wanking; I haven't been groped; I haven't even been yelled at (by fellow riders, at least; plenty of drivers have yelled at me). And I've never been on a bus or train that's crashed. (A big KNOCK ON WOOD to all the aforementioned scenarios, of course.)

For the most part, Muni is an uneventful part of my week. I think it helps that I always have my headphones on, and am usually buried in a book, so as long as they don't smell, I can easily ignore any jerk that may be riding that bus with me.

That said, I have witnessed an assault, and was almost pickpocketed (both detailed in this previous post), and seeing that assault was probably my worst experience, though not as bad as the experience of the guy who was assaulted, of course. I am extremely lucky those incidents are the worst of it, especially considering I have been riding Muni basically my entire life, and alone since I was in grammar school.

But there are still plenty, plenty, of incidents that rank low on the nightmare scale. Variations of these things have probably happened since Muni's 1912 inception, and will continue until we're commuting via teleportation.

I've watched fellow riders pick their noses and then think nothing of wiping it off on the seat next to them, and THEN grabbing that hand rail when they get up. I've seen plenty of people clipping their nails, and while I haven't witnessed anyone actually clipping their toenails on the bus, I'm pretty sure I've witnessed the aftermath of such an event more than once. (See below visual proof.) 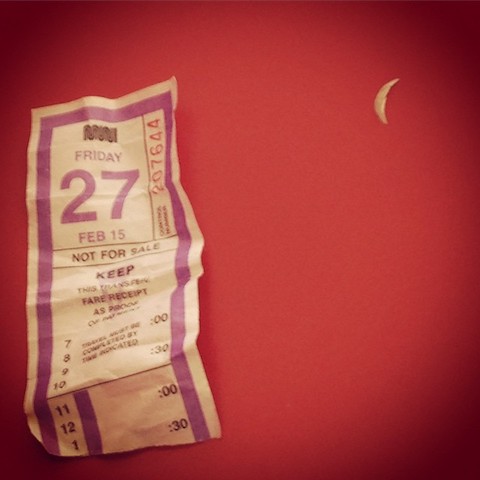 I've had a bus driver stop the bus, ask me to rescan my Clipper, and then kick me off because the card was short 50 cents. (That 50 cents would have been collected the next time I added cash to my Clipper card but WHATEVER MS. MUNI DICTATOR, I'LL WALK.)

I was hit by a sandwich some drunk guy threw at the cable car I was riding. I've had a drunk guy pass out at my feet at a bus stop, and when I moved, he somehow got up and passed out at my feet again when I wasn't looking.

I've had to get off a bus way before my stop when someone's stench was so bad I almost vomited. I can remember the days when cockroaches were a common sight on some lines, and had plenty of those run across the tops of my feet as I was sitting, causing near panic on my part.

I've been stuck in a tunnel on an N-Judah for close to an hour when there was some kind of breakdown ahead of us. I've had to get off a bus and walk up Sacramento from Chinatown when the bus gave up on its "I think I can" mantra. I've sat on a bus as it took literally 30 minutes to go one block during Salesforce convention bs. Before cell phones and when I was too poor for cabs, I've waited two hours in the rain for my bus to finally come. And I've had to depart countless buses after the driver and a passenger have gotten into some kind of altercation.

And I was hit by car that ran a red light, lost control, and slammed into the SFSU bus stop that a dozen other people and I were waiting at. I was lucky that I got off with a minor case of whiplash (and a hospital bill that was several thousand dollars I couldn't pay, resulting in the need for a lawyer), because compared to the other injuries suffered by those hit, that was nothing. But because I wasn't on a bus, and Muni really can't take much of the blame here, it probably doesn't count.

So, aside from that, none of these events was life-threatening, or as bad as a Muni ride can probably get. So I'm looking forward to hearing worse stories from you guys. And I'll wager that as bad as your story may be, none matches the bus ride seen at the beginning of the under-appreciated 1973 potboiler, The Laughing Policeman!

People with cool, provocative political messages will have to save it for their bumper stickers. As of today, political ads on Muni buses and trains are are prohibited, ABC 7 reports, following a

Bay Area native Noor Salman, who is accused of aiding and abetting her husband Omar Mateen in the deadliest mass shooting in US history at Pulse nightclub in Orlando last June, will soon