Woods Beer Co., whose original Cervecería location on 18th Street at the corner of Dolores Park celebrates its fifth birthday this Wednesday and Thursday, has expanded into a mini empire with five brewpubs and taprooms from the Outer Sunset to downtown Oakland. Now they're expanding further.... with a 32-foot inflatable slide.

The slide, naturally, is at Woods Island Club, adding to the Treasure Island location's existing air of makeshift whimsy. At 422 Clipper Cove Way, the Woods team pours beer on weekends from 12 p.m. to 5 p.m. which drinkers enjoy on a sandy beach area that I suspect was until recently a volleyball court. It's decorated with lawn chairs, tropical plants, and games like cornhole. And now, a slide — one free ride with every beer or empanada purchased.

The taproom, inside a former airplane hangar space, is mostly appointed with barrels of beer: This is where Woods does its barrel aging, and that means the brewery's creative ales and lagers are often available in barrel-aged format on the island. For example, a beer they've brewed for their fifth anniversary at Cervecería, an barrelled version of their original MateVeza IPA, was aged there. 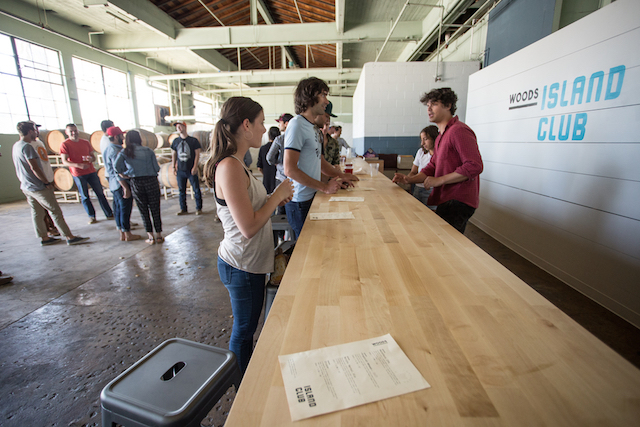 Woods' namesake and founder Jim Woods was born in San Francisco and moved with his family to Lafayette when he was ten. "I decided in high school that the best way to have beer was to brew it myself," he tells SFist. The habit stuck, and Woods' home brewing sensibilities are one reason that his beers are some of the area's most exciting. In contrast to breweries with a larger capacity that bottle, can, and distribute their products, Woods operates small brewpubs making tiny batches of beer.

"One of the challenges we've had, that ended up being a benefit, is having such small brewing systems — brewing 20 gallons at a time... But having small brewing systems lets us do one-off creative projects," Woods explains. Unlike larger craft beer operations who rarely alter their recipes and offer new beers seasonally, there's always something new on tap at Woods. The brewery even pursues kinda bizarre but popular projects like Woods' yearly "Cookie Beers" series. Brewed during Girl Scout cookie season, Cookie Beers are made in styles like a coconut caramel dubbel that tastes convincingly like a Samosa.

If the slide wasn't a clear enough indication, Woods Beer Co. is in no great danger of growing up. When Woods bought his first home brew kit from Oak Barrel Winecraft in Berkeley, Homer Smith, who has worked there for 40 years, sold it to him. "He was a quiet kid, sure, just gettin' started," Smith tells SFist of the high-school aged Woods. "Really curious. And when you're curious, what happens is, you're gonna try different things."

Related: Speakeasy Ales & Lagers Won't Shut Down After All, Continues Production With New Owner Lined Up

Sheila Ash, the 69-year-old owner of Noe's Nest Bed & Breakfast in Noe Valley, is one of those characters who epitomizes the colorfulness that San Francisco has always been known for. Born to

A mystery involving a recently divorced couple in Shasta County and a wife who went missing three weeks ago led to the discovery of multiple body parts in Whiskeytown Lake over the weekend,