Sheila Ash, the 69-year-old owner of Noe's Nest Bed & Breakfast in Noe Valley, is one of those characters who epitomizes the colorfulness that San Francisco has always been known for. Born to Orthodox Jewish parents in Nazi-occupied Poland, Ash lost most of her family during WWII, but her parents managed to escape to Brooklyn, where she was raised in the highly religious community of Borough Park. Clearly always a rebel, she made it to San Francisco 40 years ago, at the age of 29, and worked two jobs and later rented out rooms in a home she bought in 1982 to help raise three children on her own.

In a new "Regulars" column in the Chronicle, Ash says that growing up in the strict Orthodox Jewish community made her know she'd have to "to work hard to gain [her] freedom," and that she did.

For many years, as you can see in the Chronicle video, she's been a fixture in Noe Valley and at events around town, dressing up in hats and furs even to go to the gym. "I believe I'm walking, talking art," Ash says.

The hats, she explains, evolved out of her attempt to conceal the fact that she was born without a left ear.

Ash was previously profiled by the Noe Valley Voice in 2013, and she said there that she's always on the go to events and parties around town, and "I'm only home 10 nights a year." But she prefers to attend charity events, because she believes that's her way of giving back. 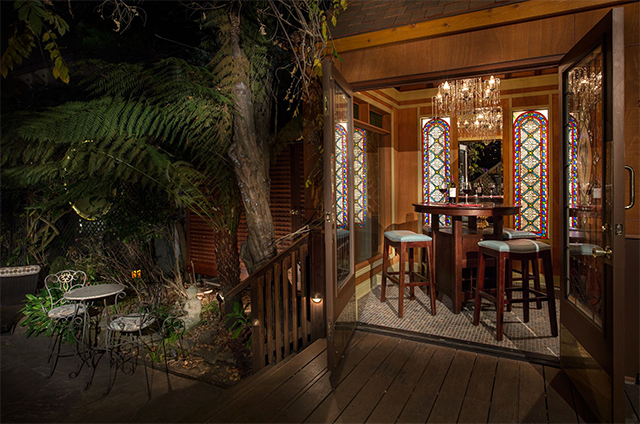 Also, here she was profiled that same year by Mission Local, and above you can see a shot of her "wine temple" back patio.

Remember when we caught wind of a proposed TV series a full two years ago called 94110, via a casting call for actors to play "six leading technology executives living, learning, and loving

A post shared by Matt Coelho (@mateobmc) on Apr 1, 2017 at 7:39pm PDT Woods Beer Co., whose original Cervecería location on 18th Street at the corner of Dolores Park celebrates its