Chef Alison Barakat did not think of herself as a trendsetter when, in 2005, she began serving a fried chicken sandwich at her new Temescal neighborhood bakery in Oakland, Bakesale Betty. Barakat had been a cook at Chez Panisse, and had created a simple sandwich for picnics with friends a few years before, using buttermilk-soaked fried chicken and an aggressively spicy and acidic jalapeno and red onion slaw, as she explained to Grub Street several years ago. Pretty soon, via word of mouth, the sandwich became a huge hit, eclipsing all of the bakery's other products to the point that the place is now only open three hours a day, five days a week, pretty much only selling fried chicken sandwiches, and strawberry shortcake when in season  and there's always a line, all these years later. By 2017, we now see fried chicken sandwiches, many based on Barakat's formula and featuring some type of slaw, on menus all over the Bay Area and the country, begging the question of why such a simple concept of sticking fried chicken between bread seems like such a new idea. Below, SFist brings you our picks for the top examples in the city, including one from the new fried-chicken-sandwich-only operation, The Bird. But if you want to taste the paradigm, the one that inspired all these imitators, you'll have to head to North Oakland between 11 a.m. and 2 p.m., Tuesday to Saturday, and look for the lady with the blue wig.  Jay Barmann

The Bird
Adriano Paganini of Super Duper, Uno Dos Tacos, and many many more ventures finally gave fried chicken its due with The Bird, opened in SoMa last fall. Consulting chef Blair Warsham concocted their signature fried chicken recipe, which is available in regular or with a berbere spice blend for a kick, served on a freshly baked bun, and topped with crunchy apple slaw. The menu's simple — fried chicken, fries, wings after three — although they've recently expanded to offer breakfast (fried chicken biscuits, naturally). — Caleb Pershan
115 New Montgomery Street between Minna and Mission Streets 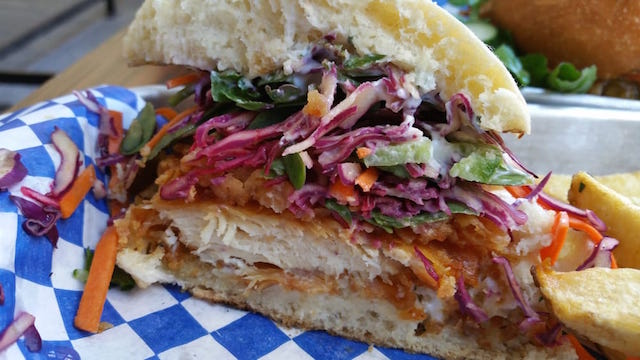 Crafty Fox
This inner Mission beer bar in the shadow of the freeway is also within crawling distance of Zeitgeist and a bit in that bar's shadow, too. But the food at Crafty Fox stands out, and I always come back to the fried chicken sandwich. It's juicy, sizable, and soft except for the crunch of slaw and fried chicken breading. 36 taps of California beer add to the taste — this spot was ranked the best beer bar in California by Craftbeer.com. Take that, Zeitgeist. —Caleb Pershan
1700 Mission Street (at Duboce Ave/13th Street) 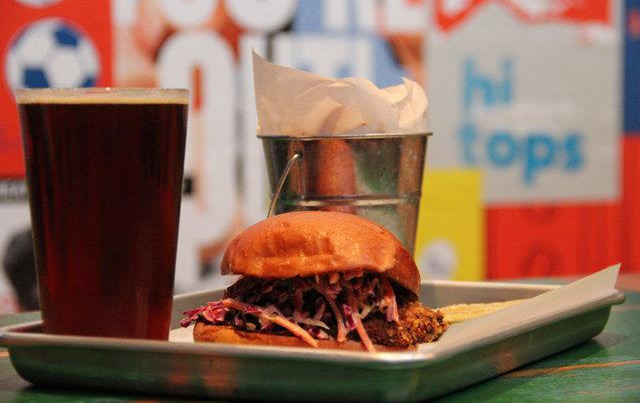 Hi Tops
The fried-chicken sandwich has been a hit on Hi Tops' menu since this popular Castro spot opened in 2012, and it's remained consistently good ever since. It's a darkly fried breast sitting on a soft brioche bun, topped with aioli and a slaw that's more sweet than the spicy Bakesale Betty version  created by consulting chef and onetime Top Chef contestant Jamie Lauren. The chicken is juicy, the batter well seasoned and always fried to a good crisp, and the high-quality bun is important too, and not overwhelmingly bready. For $12 you'll be hard-pressed to find a better lunch or dinner, assuming fried chicken is your thing.  Jay Barmann
2247 Market Street between Sanchez and Noe 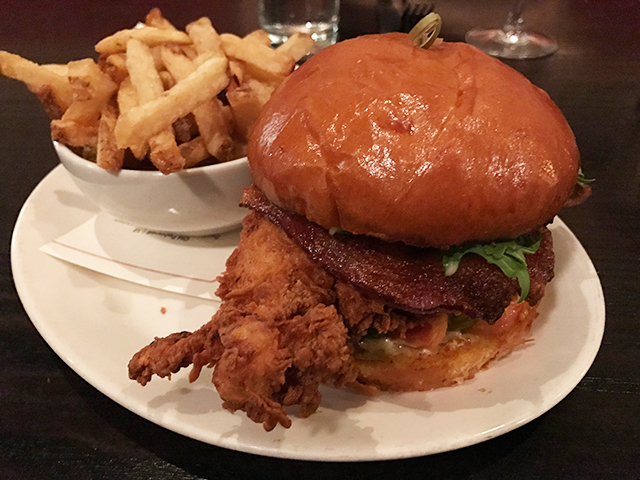 Hog & Rocks
Somewhat new to the menu at this seven-year-old Mission spot is a fried chicken sandwich that takes the restaurant's name and theme to heart. The well fried, boneless breast is served on a brioche bun with bacon (hog) and oyster mayo (rocks), along with arugula and some nicely acidic bread-and-butter pickles, as well as some pickled Fresno peppers that help cut through the fat of the mayo and bacon. It's a rich example of this sandwich, but a good one that's elevated by these unexpected additions.  Jay Barmann
3431 19th Street between Mission and Valencia 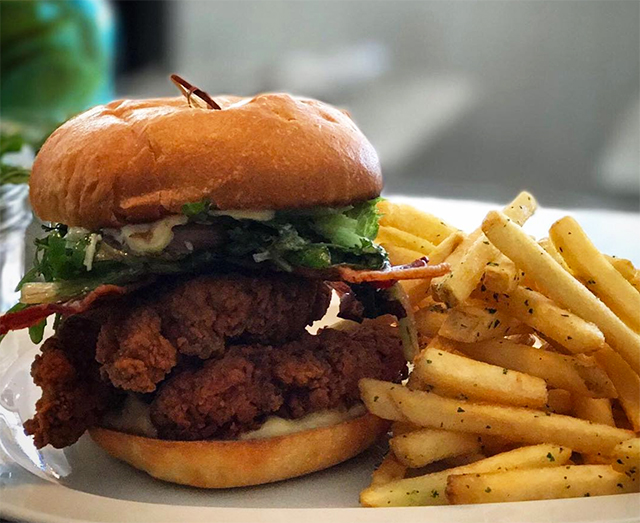 Marlowe
Chef Jennifer Puccio's take on the fried chicken sandwich form features some darkly fried meat, a Caesar aioli, bacon, and lightly dressed field greens. It only makes appearances on the lunch and brunch menus  unlike the famed Marlowe burger, which is served at dinner too  and it's worth a special trip for a lunch date. It doesn't hurt that the place makes a mean cocktail, and the fries are great too.  Jay Barmann
500 Brannan Street at Fourth 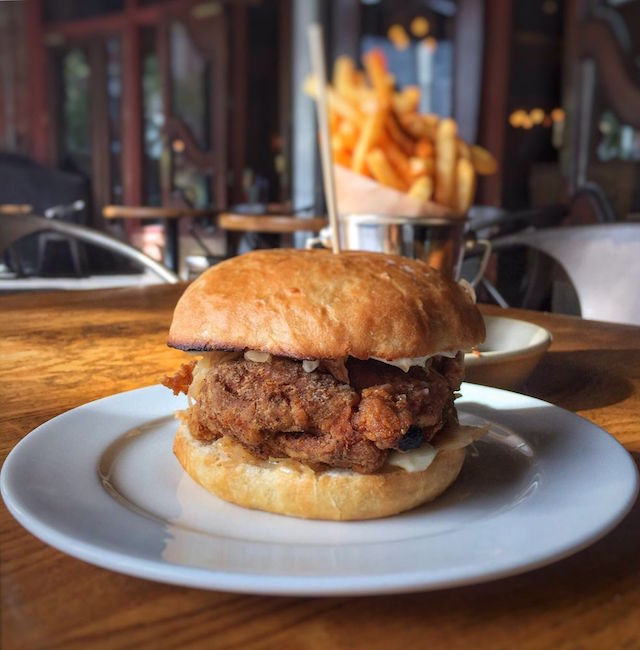 Naked Lunch
Named for the novel by beat writer William S. Burroughs, Naked lunch is known for their Mary's Farm fried chicken sandwich, and let's be real, we'd catch hell if we didn't include it on this list. Having personally eaten about 30 of these sandwiches (conservative estimate), I can vouch for their consistency as well as tastiness. The chicken, served on Acme pain de Mie, is just a little greasy/schmaltzy, which a buttermilk coleslaw and garlic aioli cut through nicely. Despite the name, the Naked Lunch is also open for dinner, and beers, pool, sports watching, and a pop-A-Shot basketball game make it a place to gather and linger. — Caleb Pershan
504 Broadway between Romolo Place & Kearny Street 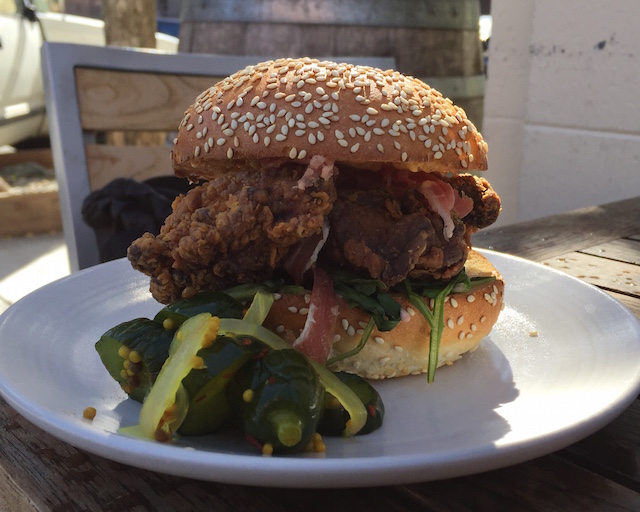 Salumeria
Next to Central Kitchen, the popular 20th Street restaurant from Thomas McNaughton's Ne Timeas restaurant group, is Salumeria, its charming deli and grocery outpost. When brunch is popping off at the restaurant, swing by here: For Saturday and Sunday brunch, 10 a.m. to 2 p.m. only, they offer their super bomb fried chicken sandwich. That's served with poached egg, prosciutto, hollandaise, and arugula. The breading is crispy, the chicken tender, and it's perfectly dressed. There are those for whom the chicken and the egg thing is weird — you can order it without, but along with the prosciutto, it adds a certain extra something (namely, 1,000 calories or so). —Caleb Pershan
3000 20th Street between Alabama and Florida Streets 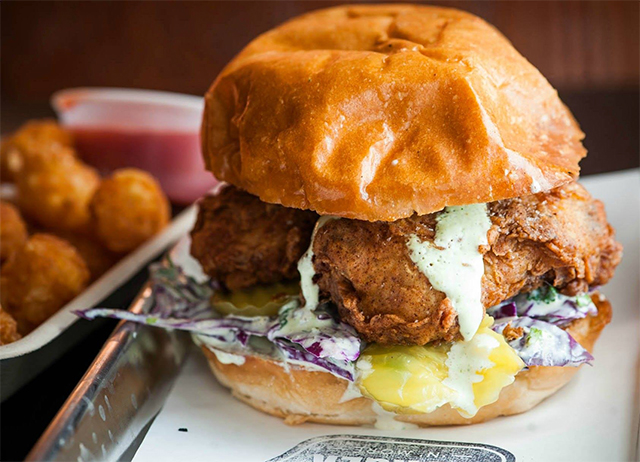 WesBurger 'n' More
Burgers may be the big business at this one-year-old Mission spot, but chef Wes Rowe fries a mean chicken, and the very red and spicy Nashville hot chicken, served sandwich-style, should not be missed on a fried chicken sandwich tour. He also makes a more classic, less spicy version (pictured above), which comes topped with miso aioli, and a delicious pickle slaw. Pro tip: If you stop by in the evening between Thursday and Sunday, you should grab a drink in The Den, the self-proclaimed "smallest bar in the Mission."  Jay Barmann
2240 Mission Street between 18th and 19th

Bluestem Brasserie - It only shows up on Tuesdays at lunch, but this pimento cheese- and bacon-topped beauty is worth a try.

Finn Town - Maybe it was a little circumspect of this new spot, next door to Hi Tops, when they put a fried chicken sandwich on their menu. But it's a pretty good version, with a cornflake crust.

Little Skillet This small SoMa operation is still going strong with their chicken and waffles, and their fried chicken po'boy with Cajun remoulade would definitely be on this list if it were a Top 10.

The Organic Coup - This newish chain from a pair of Costco execs feels pretty chain-y, but their signature sandwich is trying to go toe to toe with the likes of Hi Tops and The Bird.

Late Friday night, Ashley Aleman of Watsonville, California got a call she wasn't expecting: The Guelph Humane Society of Ontario, Canada rang her up to say that her cat, BooBoo, was safe at

The last couple of years has seen CUESA's once small celebration of goats  and baby goats  turn into a major event, following some social media hype, and the nickname Goatchella. This year, the

—
The Eight Best Fried Chicken Sandwiches In SF
Share this