Rather than placing its emphasis on the downtown Oakland offices it purchased in 2015, embattled ride-hailing giant Uber will be renting much of the massive East Bay space it owns to others, placing only a few hundred, not thousands, of its own employees there.

Instead, Uber has purchased a major stake in the offices being built as part of the Chase Center in Mission Bay, San Francisco, putting the company courtside when it comes to the Golden State Warriors' new arena there.

The $1 billion Chase Center, which is now under construction after years of legal challenges failed to block it, is expected to be complete in 2019. With it comes 580,0000 square feet of office space, and as Uber's head of global workplaces Adony Beniares reveals to the Business Times, Uber will have at least half that square footage to itself as an equal equity stakeholder along with the Warriors. Alexandria Real Estate Equities, the Mission Bay developer, is also a minority partner.

"The Warriors are thrilled to partner with Uber and Alexandria on the two office buildings that will be a critical component of our new multi-use district in Mission Bay," the team said in a statement. "Alexandria has a proven track record of success navigating the complex and unique urban-science mecca that is Mission Bay, and Uber is one of the 21st century’s greatest tech success stories."

Alexandria, the Business Times reminds us, is working on previously announced Uber offices at 1455 Third Street and 1515 Third Street. Those will open late in 2018 or early in 2019, adding to Uber's serious SF presence. With 3,650 SF employees as of January, Uber is the city's 7th largest employer and its second largest tech tenant. 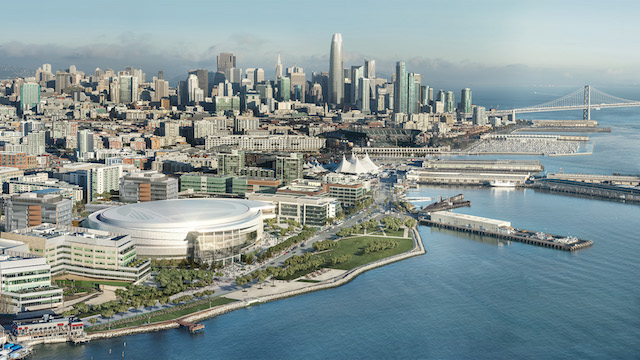 Uber's purchase of Oakland's Uptown Station two years ago, the 380,00-square-foot former Sears Building on Broadway, was a steal at just $123.5 million. While the company originally planned to place 2,000 to 3,000 of its employees there, now Uber is marketing up to half of the building to other tenants. Rent isn't yet determined.

Uber's Oakland ambitions were concerning to some in the city who already feel the influence of tech on rent and culture, and surely it would be the target of a degree of ill-will there. Still, it could cut down the tax revenue and other local spending Oakland officials were counting on. Now, says Adony Beniares, "We want to be thoughtful about how we move into Oakland. We're moving slower there."

You might say Uber is approaching Oakland with caution, while here in SF, it's taking its usual full-speed-ahead approach.

In the first case of a death by a cable car collision in nearly a decade, a 93-year-old man who was struck by a cable car Sunday afternoon has died from his injuries.

Perennial Marina fave and recipient of some rave reviews from Michael Bauer, Mamacita (2317 Chestnut Street) suddenly closed down on Friday night in a move that Inside Scoop calls "an abrupt and surprising

—
Uber Buys Half The Office Space At New Warriors' Arena, Scales Back Oakland Plans
Share this