Julia Child once said "The real test of a good chef is a perfectly roasted chicken," and I have subscribed to that dictum over the years in eating around San Francisco and elsewhere, always being quick to love a place that made me a lovely chicken. Today the SFist editors assemble for you what we'd say are the finest examples around town, though truly the list could probably have been twice as long as this, if not more, because this is a city that takes its roast chicken seriously. As the great lady would say, bon appetit!

Bonita Taqueria y Rotisserie
I know what you're thinking — a taqueria in the Marina? Well, get over it. Chef Alberto Pitman has, they say, "developed a fusion of traditional iconic Mexican flavors along with contemporary spices and presentation." That includes their rotisserie chicken, a product of Mary's Free Range Chickens (I know, what's with the "s"?) marinated and roasted in their own secret mix of herbs and spices. You can order a half chicken or a full chicken, likely for less than you'd pay for a cocktail in that part of town. — Eve Batey
2257 Chestnut Street between Scott and Pierce Streets

Cocotte
Though many of us associate rotisserie chicken with tailgate parties or Kenny Rogers, a single look at the word will remind you that it's a cooking tradition that began with the French — and a walk down any busy street in Paris will prove it, with plump roasted chickens hanging in the windows of many a cafe. It's a tradition kept alive at Cocotte, where executive chef and co-owner Mikael Audry (who hails from Sancerre) is so dedicated to the rotisserie that the word appears in their logo. Diners have their choice of a half or whole "organic Petaluma chicken a la broche served with roccola pesto, romesco sauce, and porcini mushroom sauce" (yes, all three). If you prefer to rip into your chicken as you watch The Walking Dead, they also have a rotisserie to go plan that will send you on your way with a fowl, sauce and your choice of sides. — Eve Batey
1521 Hyde Street, between Jackson Street and Pacific Avenue 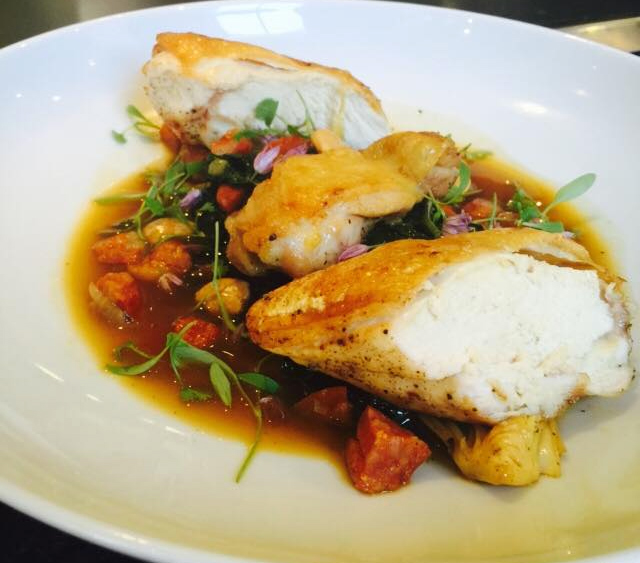 The Commissary
I will always go back for the chicken at chef Traci Des Jardins's Presidio restaurant, where the preparation of the bird changes seasonally but you can always count on the execution being on point. I originally had it served with a vinegar-y onion gastrique and accompanied by chicken liver toasts, but it's also been served with chorizo, kale, and marcona almonds, as pictured above, and with lentils, carrots, and lollipop kale as it is on the menu currently. In any form, it's not going to disappoint.  Jay Barmann
101 Montgomery Street (the Presidio Montgomery Street) 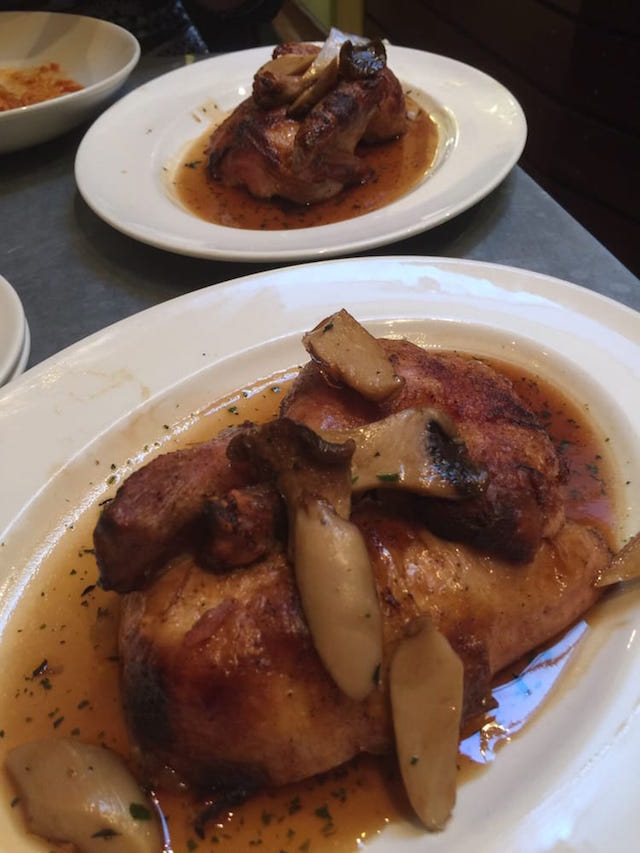 Delfina
Organic Mary's birds, roasted with trumpet mushrooms and mashed potatoes (with some primo olive olive) is a juicy must-order at owner Craig Stoll's mission institution. No, the pizzeria is next door. —Caleb Pershan
3621 18th Street between Guerrero and Dolores Streets 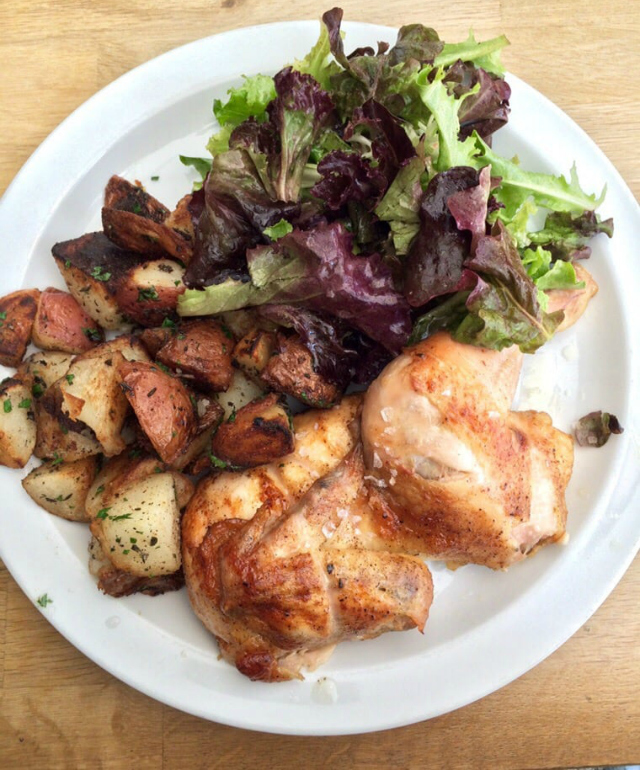 Elmira Rosticceria
If you're craving a roast chicken for weekday lunch, Elmira's the "neighborhood Italian eatery" that can scratch that itch. Though they're only open until 3 p.m. Monday-Friday, they do a brisk business in roast meats and seasonal salads, as well as their take on Mary's Free Range Chickens, served by the half. And you better clear your afternoon calendar, as your bird also comes with "potatoes slathered in pork drippings." After this work day lunch, you're gonna need a nap. — Eve Batey
154 McAllister Street, between Hyde and Leavenworth Streets 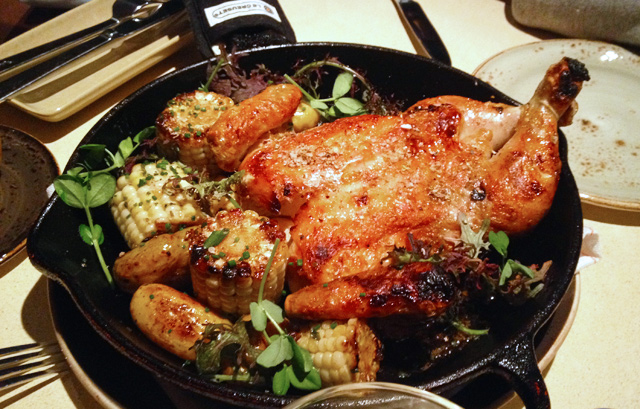 Fog City
Chef Bruce Hill's wood-oven roasted chicken was an immediate standout when he made over the former Fog City Diner's menu in 2013, and it remains a star of the menu today and one of the first that come to mind when I think of great roast chickens, besides Zuni's. It's simply prepared, butterflied and roasted over aromatics like cumin and coriander, and seasoned with Maldon sea salt, lemon zest, chili, and black pepper, and it comes served in a cast-iron pan with roasted potatoes and charred corn. And the wood oven (and butterflying) keeps it super juicy.  Jay Barmann
1300 Battery at the Embarcadero 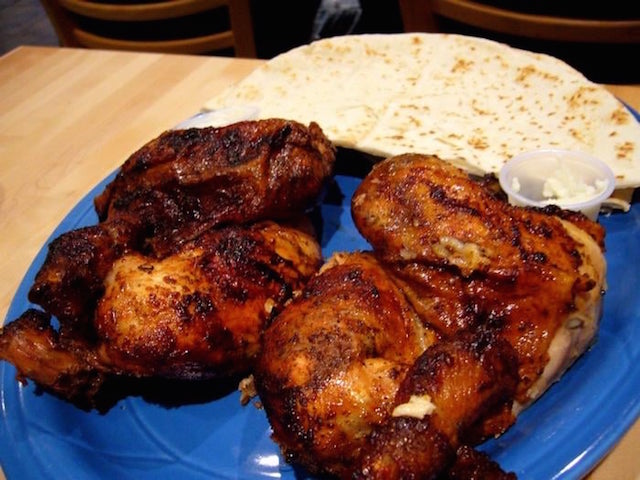 Goood Frikin Chicken
My sister had to drag me into Good Frikin Chicken years after I'd moved to the neighborhood, but I'm glad she did. Though the chicken shwarma is great, the whole rotisserie chicken's what you want, roasted to perfection as it is with a dusting of Middle Eastern spices. The name, which originally put me off, does not lie. —Caleb Pershan
10 29th Street at Mission Street 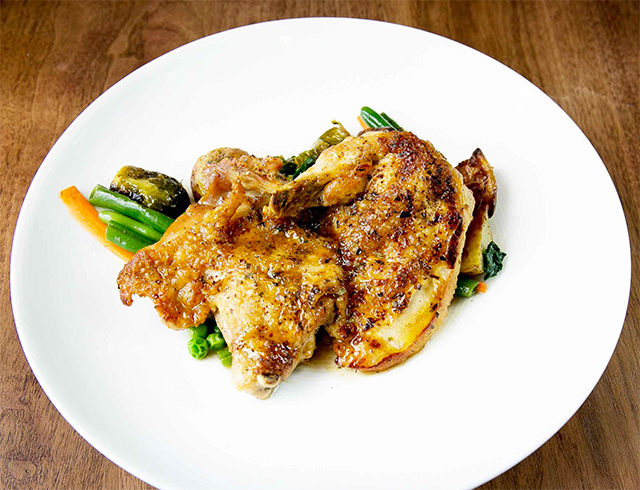 Lark
The half roasted chicken at Lark in the Castro, listed on the menu with the Greek word "Kotópoulo," is perhaps less of a Greek-style chicken as a riff on chicken piccata with the subtle addition of oregano. It's a consistently delicious, $19 dinner, served deboned with a white wine-lemon-butter sauce with capers and a side of well seasoned quinoa, and the added bonus with this place is a reasonably priced, and totally interesting wine selection by the glass.  Jay Barmann
4068 18th Street 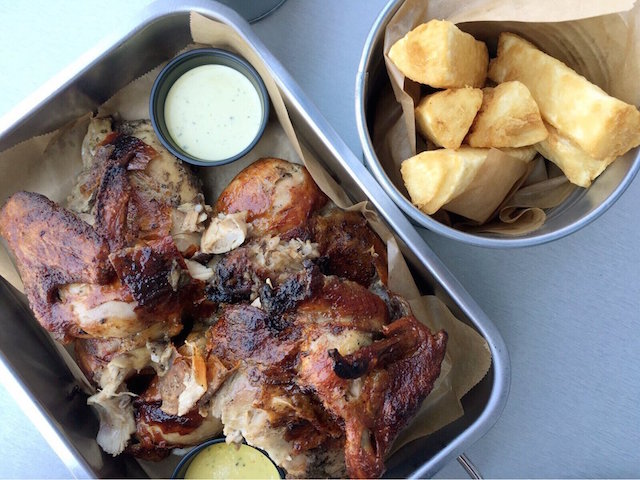 Limón Rotisserie
Owner Martin Castillo started with Limón in 2004 and expanded with Limón Rotisserie spin offs. But eventually, he switched the original Limón to a Limón Rotisserie as well: People just couldn't stop ordering the Peruvian-style chicken, and so Castillo gave the people what they wanted. It's what you'd like, too. — Caleb Pershan
1001 South Van Ness Avenue between 21st and 22nd Streets and 524 Valencia Street between 16th and 17th Street

Marlowe
Marlowe and its chef, Jennifer Puccio, won me over with this poulet vert when the restaurant first opened in 2010, and it remains one of my hands-down favorites in town. As Puccio explains in the seven-year-old video above, she uses Rosie organic chicken, and it's marinated and then served with a vibrant herb puree that includes parsley, tarragon, basil, garlic, anchovies, capers, and Dijon mustard. Currently on the menu it's served with a pancetta-Brussels sprout hash and sweet potato purée.  Jay Barmann
500 Brannan Street at Fourth 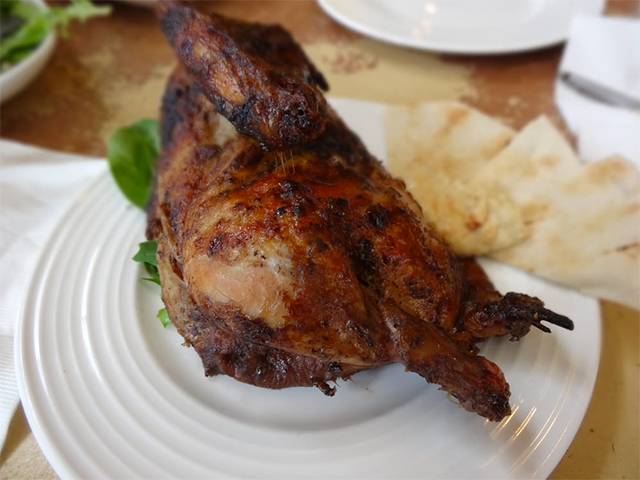 Morning Due Cafe
A hidden gem of the Castro/Mission border (i.e. Church Street) is the rotisserie chicken at Morning Due Cafe, which is seasoned with a bit of Middle Eastern flair with sumac and a spice blend they've otherwise kept secret. It's a reasonably priced meal in an unreasonably priced city with a half chicken dinner just $14 (including fattoush salad and one side), and you can grab a full Dolores Park picnic feast here with two whole chickens and four sides for $40. Be advised that the rotisserie counter has a separate entrance from the regular cafe, over on Church Street.  Jay Barmann
3698 17th Street at Church 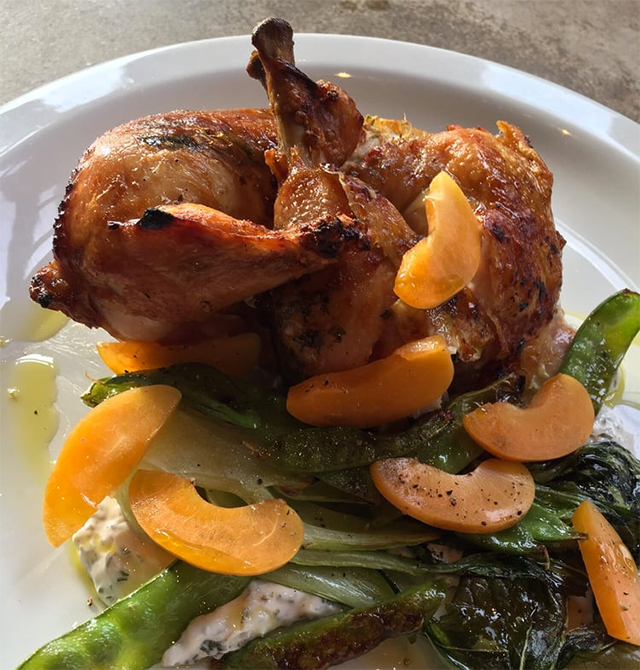 Nopa
Newly added as a semi-finalist for the James Beard prize this year for Outstanding Restaurant in the county  awarded only to top-tier restaurants that are 10 or more years in  Nopa continues to be a tough reservation to get last minute, and a favorite dining destination for the center of the city. Chef Laurence Jossel specializes in the kind of rustic California-Mediterranean food that put this city on the national food map, and the rotisserie herbed chicken with butterball potatoes and horseradish cream is a consistent standout on menu with several of them. You may be inclined to go for something more exciting sounding when you land a table here, but you'd be wise to give this chicken a try and remember how great a rotisserie chicken can be.  Jay Barmann
560 Divisadero at Hayes 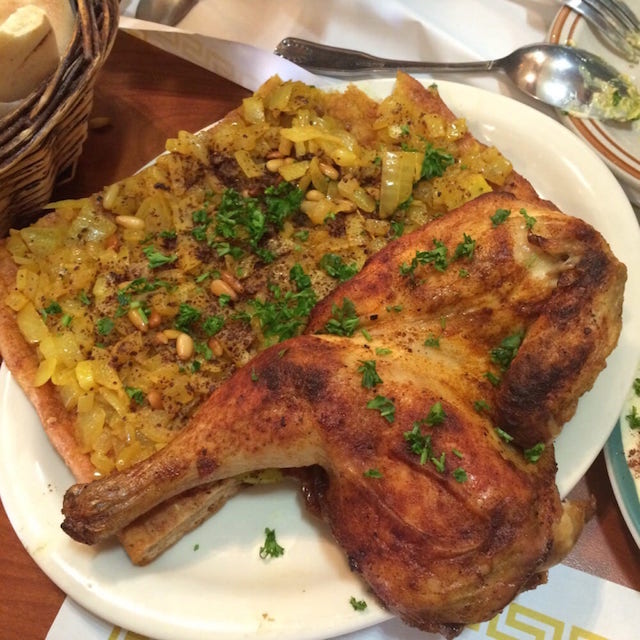 Sarah A. via Yelp

Old Jerusalem
Most nights, Old Jerusalem will run out of mousakhan, a Palestinian chicken preparation served on a bed of bread. When you taste it, you'll see why. Sumac and other spices seep into the chicken juice, which is absorbed by the bread so you don't miss a drop. —Caleb Pershan
2976 Mission Street between25th and 26th Streets 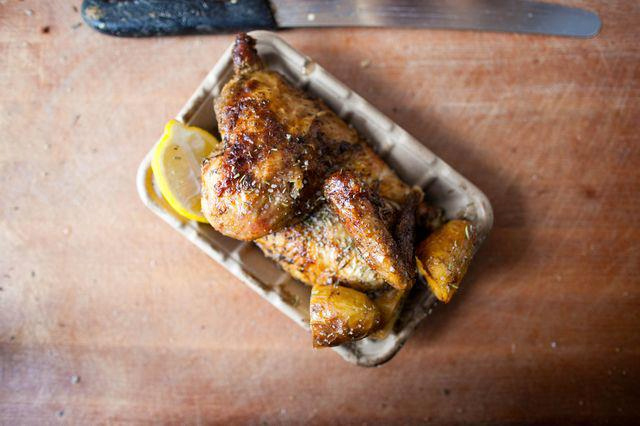 Roli Roti
Farmers' market-goers should be pretty well familiar with the sight of Roli Roti's rolling rotisserie operation, where spit-roasting birds can be seen turning and roasting and dripping their juices all over a delectable pile of rosemary potatoes. Swiss-born farmer's son Thomas Odermatt was inspired to create his sustainably sourced, herb-marinated, free-range chicken operation back in 2002, noticing that there weren't enough simple, wholesome meal options available on-the-go, or via food trucks. Fifteen years in he can now claim to be the "grandfather of gourmet street food," and the Roli Roti operation makes appearances at 46 different markets each week at the height of farmers' market season. Clearly his formula has worked (and the porchetta is bomb, too).  Jay Barmann
Various locations 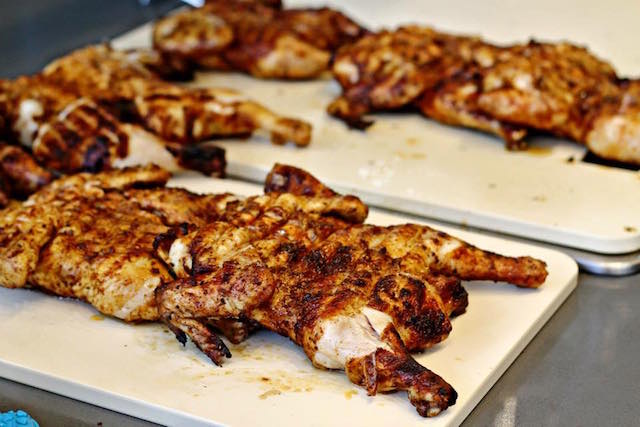 Spinnerie
Deboned Mary's free range rotisserie chickens, anyone? These ones are spatchcocked, to be precise, and they're the star of the show at this counter service, casual spot on the Polk corridor. Oh, and their Peri Peri chicken is as close to Dom's Chicken Window fantasy, or whatever, as you're likely to come. —Caleb Pershan
1401 Polk Street between California and Pine Streets 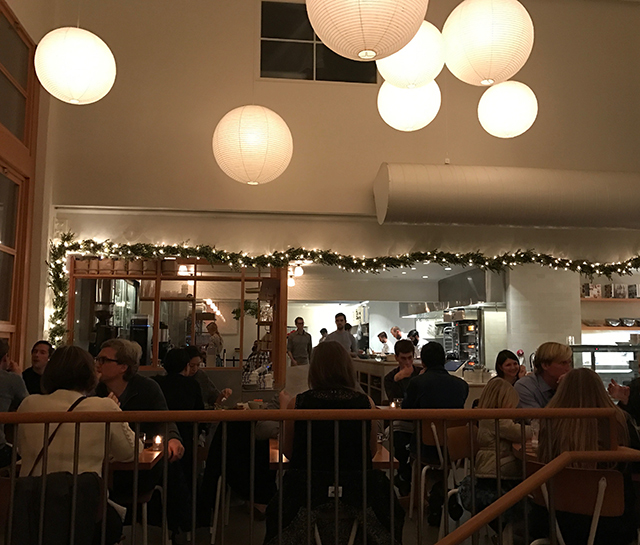 Tartine Manufactory
A highlight of dinner service at this Mission warehouse space is the skillet-roasted half chicken, with leeks, sherry vinegar, and hazelnuts. Gluten gods Chad Robertson and Elisabeth Prueitt enlisted chef Sam Goinsalvos (formerly of New York's Il Buco) for their big sister follow-up to the original bread and pastry shop, and its impressive entrees like this that show just how much their establishment can do. —Cale Pershan
595 Alabama Street at 18th Street 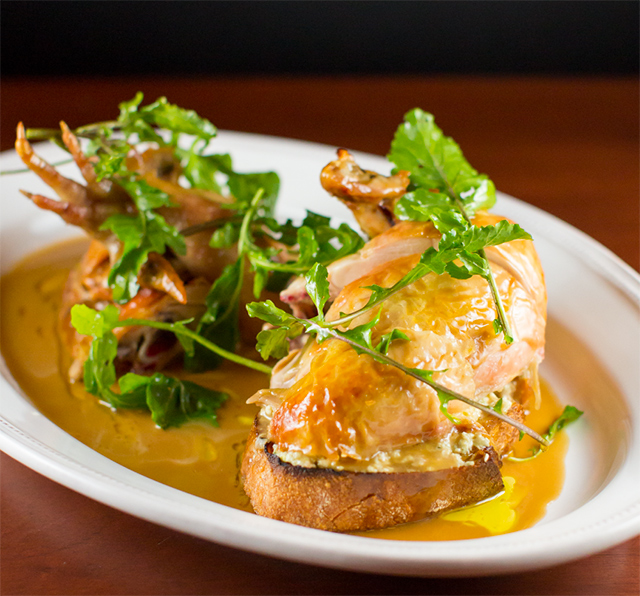 Tosca Cafe
Tosca's roasted chicken for two, served in pieces atop thick, soaked slices of Italian bread slathered in fresh ricotta, in a pool of heavenly marsala gravy redolent of maple syrup, is absolutely a must-try, and destined to eventually land on our compendium of must-have classic SF dishes. It's only been on the menu of the revamped bar-restaurant for a little over three years, though, so it's not classic yet, but executive chef April Bloomfield delivered a stunner with this one (which I'd put at the top of my recommendation list for this place if it weren't for the equally amazing red-sauce dinner options, meatballs and braised pork shank included).  Jay Barmann 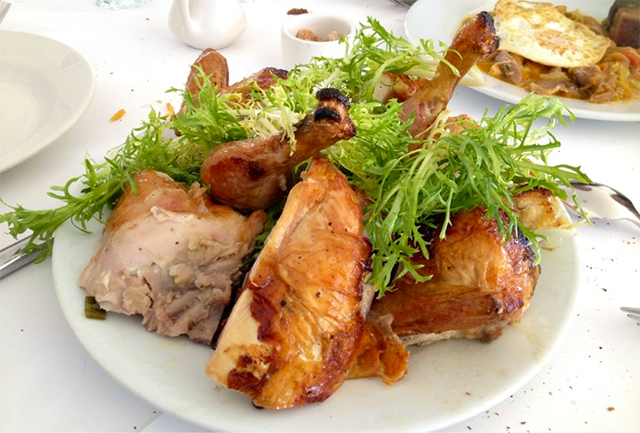 Zuni Café
Though the world lost Zuni's beloved chef Judy Rodgers three years ago, one of her most iconic creations lives on: Her wood-oven roasted chicken for two, which, while roasting, releases its juices onto croutons that are then served, with seasonal greens and a bright dressing, underneath the finished chicken. "It's a dish that never gets old, and once you've tried it you'll never want a chicken roasted in anything but a wood oven," Jay wrote about it when we named it to our 18 Must-Have Classic San Francisco Dishes last summer. Just remember that it takes about 60 minutes for Zuni staff to prepare, so make sure that the other half of your "two" is someone worth spending the hour with. — Eve Batey
1658 Market Street, between Franklin and Gough Streets

Over two dozen horses were left stranded in paddocks in San Jose after rising floodwaters forced the evacuation of tens of thousands of people there earlier this week, without their pets and animals.

White House Press Secretary Sean Spicer said WHAT? *devolves into uncontrollable, incredulous coughing* "I do believe you will see greater enforcement of it" Spicer says in response to Q about whether DOJ will

—
The 18 Best Roast Chickens In San Francisco
Share this