Apple has kept details about the completion and move-in date for their new, Norman Foster-designed "spaceship doughnut" campus in Cupertino fairly well under wraps, but this week we have official word that the move-in month for what's now called Apple Park will be April, as the company announced in a press release. That's just for some of the company's employees, because as they say, "The process of moving more than 12,000 people will take over six months, and construction of the buildings and parklands is scheduled to continue through the summer."

The project includes 175 acres of parklands, in fact, with walking trails, a huge parking structure (in addition to underground parking beneath the doughnut), a separate research and development facility, a huge fitness center, a visitors' center and cafe open to the public (as well as an Apple Store), and an underground, 1,000-seat auditorium, named The Steve Jobs Theater, the entrance to which is pictured below. The theater's entrance is "situated atop a hill  one of the highest points within Apple Park  overlooking meadows and the main building," the release explains, and consists of "a 20-foot-tall glass cylinder, 165 feet in diameter, supporting a metallic carbon-fiber roof."

Move-in for the campus and completion of some of the grounds work, which includes smaller structures and pathways in the center of the doughnut, may have been delayed by the series of major rainstorms we've had over the past two months  with mud and water accumulation at the end of January well documented in the drone footage shown above.

The 2.8-million-square-foot main campus of the company marks a major architectural achievement as well, "clad entirely in the world’s largest panels of curved glass," the release explains, and with a roof covered in photo-voltaic panels that produce 17 megawatts of energy to power the entire campus, making it one of the larges solar arrays in the world. The main building also including some enormous, four-story sliding glass doors that retract to expose an atrium that can be seen in the video above  not unlike the enormous retractable doors Foster designed for the company's flagship store in SF's Union Square, which opened earlier this year. And let's be honest: There aren't a lot of company's in the world that can afford to build such a huge, ambitious headquarters all to the specifications of a man so famously design-oriented as Steve Jobs. 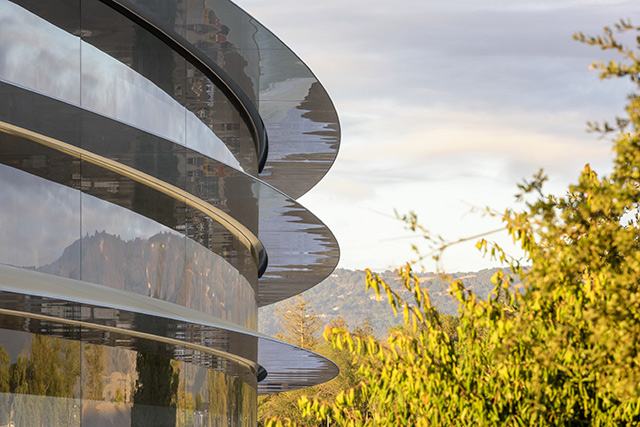 Says Jony Ive, Apple’s chief design officer, "Steve invested so much of his energy creating and supporting vital, creative environments. We have approached the design, engineering and making of our new campus with the same enthusiasm and design principles that characterize our products. Connecting extraordinarily advanced buildings with rolling parkland creates a wonderfully open environment for people to create, collaborate and work together. We have been extremely fortunate to be able to work closely, over many years, with the remarkable architectural practice Foster + Partners."

Jobs's widow, Laurene Powell Jobs, adds, "Steve was exhilarated, and inspired, by the California landscape, by its light and its expansiveness. It was his favorite setting for thought. Apple Park captures his spirit uncannily well."

In addition to this main campus, construction is also ongoing on what's been called Apple Campus 3, a pre-designed complex of several buildings in nearby Sunnyvale encompassing 777,000 square feet of additional office space.

Jobs, who would be 62 this Friday (February 24), died in 2011 at the age of 56 from complications related to pancreatic cancer.

Police are investigating a series of fires at a popular San Francisco tourist destination, after witnesses say a man ran from business to business lighting setting things ablaze. Police say that the suspect,

Two suspects caught a woman sleeping in Potrero Hill on fire Tuesday, the result of a previous argument between the two factions. The attack occurred between 8:30-9:15 a.m. Tuesday near