History nerds and party people alike dream about being able to time-travel to the 1920s, when a national crackdown on booze became a boon for nightlife  people always have a lot more fun when they think they're being bad, and all over the country this is an era steeped in hedonist legend. Here in San Francisco, so it's often told, thousands of miles from Washington, enforcement of Prohibition was spottier than in some other cities, and legend has it that while there were raids conducted by the SFPD for the first few years, there was also a lot of drinking going on in plain sight and under everyone's noses. Tosca Cafe, one of a number of bar businesses that managed to stay continuously open and financially afloat all through the era, likely did so by openly serving the concoction they called their "House Capuccino," a mixture of hot chocolate, steamed milk, and brandy that then, as now, didn't have any coffee in it at all.

Similarly, the story of SF's love for Fernet Branca, chronicled back in 2005 by SF Weekly, dates to before the Prohibition era, but it was after 1920, because Fernet was imported as a "medicine," it became "perhaps the only package liquor legally sold in the States." American demand grew so big that the Branca family opened a distillery in New York, and historic paperwork from the plant shows 40 drugstores in San Francisco that regularly ordered the stuff, most of them in North Beach. And you can bet that in North Beach, which itself was a hub of bootlegging activity during Prohibition, you could get a glass of Fernet just about anywhere without having to know any passwords or secret knocks.

But now SFGate provides a slideshow of some other locales that you may or may not have heard have Prohibition-era histories either as speakeasies themselves, or because they flouted liquor laws in order to keep San Franciscans, as they've always liked being, pretty drunk. And if you want to get a (fictionalized) take on the experience for yourself, you can time-travel yourself via The Speakeasy, playing now and forever at an undisclosed location near the Broadway tunnel in North Beach. 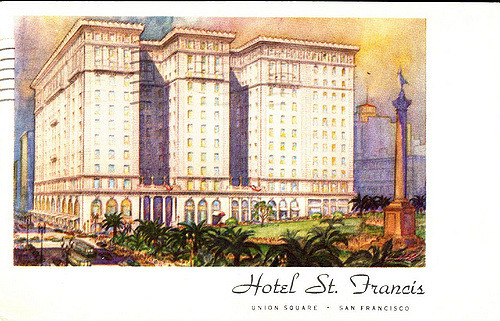 In Union Square, the St. Francis Hotel, opened in 1904, had a speakeasy in its basement, and all you had to do to get there was give a password to the elevator operator and he'd take you down. Clearly the hotel had booze available when, in September 1921, silent film star Fatty Arbuckle booked three rooms on the twelfth floor for himself and some Hollywood pals. In the midst of partying, a young woman named Virginia Rappe wound up dead, and in Arbuckle's subsequent, highly publicized trial, his lawyers argued that she'd died from "natural causes," of alcohol poisoning. Arbuckle would end up being tried and acquitted three times in her death, destroying his career.

The St. Francis, meanwhile, remained a popular spot with celebrities throughout the era including Charlie Chaplin, Douglas Fairbanks, Mary Pickford, Tom Mix, and directors D.W. Griffith and Cecil B. DeMille.

Just up the street, and obviously in order to compete, the Sir Francis Drake Hotel opened in 1928 with its own down-low booze service. As SFGate tells it, the hotel kept a liquor storeroom between floors, and alcohol was delivered to guests via room service. 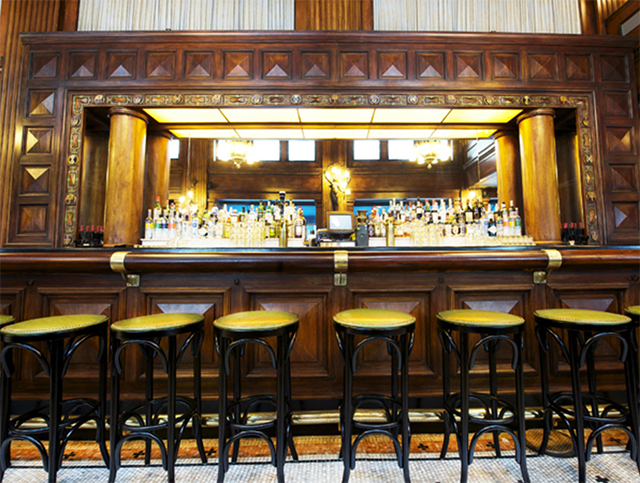 Photo courtesy of House of Shields

Similarly, the Palace Hotel wanted to keep their guests happy, and a tunnel was built that led to a bar and brothel across New Montgomery Street, the bar now known as House of Shields. The tunnel remains intact according to the team that took the bar over in 2010, but it's not accessible to the public.

In the Financial District is one former speakeasy that was likely a gay bar in the Prohibition era, as it would continue to be into the 1980's. In the present-day location of Bix, on the alley called Gold Street near the TransAmerica Pyramid, was a bar that became known just as Gold Street in the gay community, and it was probably the hush-hush gathering spot of many closeted businessmen getting after-work drinks in the '20s.

Nearby at 136 Leidesdorff Street, according to the Chronicle, was a notorious speakeasy hidden behind a fake office for the Standard Commercial Company. It was the 1920's favorite watering hole where the "city's well-heeled businessmen enjoyed their liquor surrounded by mahogany furnishings." And when the place got raided, the patrons "seemed extremely annoyed at [the] intrusion," the Chronicle reported.

Elixir, too, survived Prohibition as a "soft drink parlor" by proprietor Patrick J. McGinnis e.s.q., a prominent lawyer in town who bought the bar in 1893 and rebuilt it on the same spot after it was destroyed in the 1906 earthquake. Current owner H. Joseph Ehrmann has a timeline of the bar's history going all the way back to 1853, and it seem highly unlikely to him that Mr. McGinnis didn't figure out how to keep serving booze for the 13 years of Prohibition.

Over near the Castro, which at the beginning of the last century was home to a large number of Scandinavian immigrants and was at one time called Finn Town, the Swedish American Hall was built in 1907, complete with a bar in its basement that became a speakeasy in 1920. That bar, Cafe du Nord, was known to have an intercom system from the street-level door that was used to warn patrons if and when the cops showed up, giving them time to scurry out a back door.

An extant speakeasy space sits the basement of Bourbon & Branch, which was accessible via a staircase from the lobby of the hotel that occupies that building, facing O'Farrell Street, now the SRO called The Crosby. In that secluded bar room, the Bourbon & Branch guys found an abandoned woman's purse wedged into a crack in the bricks a few years back, containing a wallet and driver's license belonging to one Lorraine Adeline Wilson, likely left there in 1932. The mystery surrounding Lorraine inspired the name for the bar within Bourbon & Branch, Wilson and Wilson, themed after a detective agency.

Elsewhere in the Tenderloin, a building at 586 Eddy Street where mattresses were manufactured also featured a "blind pig" or "blind tiger," as illegal bars were called. And customers could conk out on a mattress if they got too wasted, so that's nice.

Just across the street, approximately at the present-day location of the Phoenix Hotel, was the Alaska Garage, which SFGate says "provided a 2-in-1 service: car repairs and bootleg liquor. While waiting for your car to be serviced, you could nip downstairs for an illicit drink."

Then there was the Amocat Club at 70 Turk Street, a speakeasy hidden behind a mirror in a barbershop, which despite serious protections including three steel and wood doors, got raided by the SFPD in 1923, who reportedly had to chop their way in with axes. 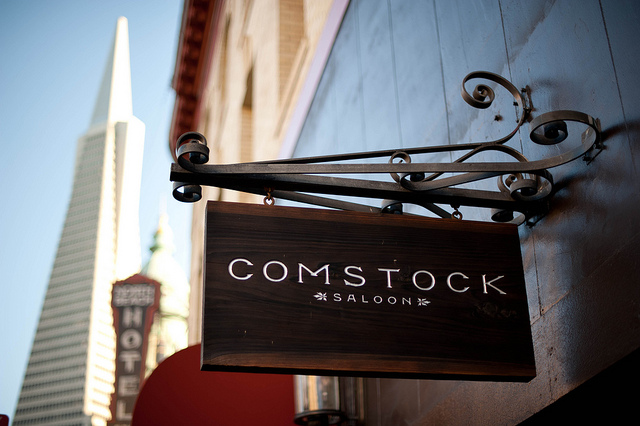 Back in North Beach, Found SF tells the story of how East Coast mafia soldiers arrived in SF during Prohibition to control the trade of illegal booze, even though the mafia is largely absent from SF's history. According to historian Dick Boyd, there were hundreds of speakeasies across San Francisco, and most were "just rectangular rooms with curtains from ceiling to floor. A waiter took the order, disappeared through an opening in the curtain, and returned with the booze." And as he explains, "If there was an unexpected raid the owners simply changed a couple digits in the street address, the color of the curtains and reopened the next day."

One of the biggest operations in the neighborhood was Izzy Gomez's Cafe at 848 Pacific Avenue. Isadore Gomez was a Portuguese immigrant who ran a "soft drink stand" here where he mixed grappa in with the ginger ale.

There was also the infamous Hotel D'Oloron, run by Portuguese and Basque immigrants approximately in the present-day location of Comstock Saloon at 155 Columbus. The place was raided so many times that according to SFGate, "the owner cut a new door in the wall and gave it a new address." According to FoundSF, however, the saloon space, with its intact brass rail and bar  as well as a gutter along the front of the bar with a drain where men used urinate, right out in the open  was continually a bar starting in 1907, so perhaps the Hotel D'Oloron was next door? Supposedly, it's the bar where bank robber Baby Face Nelson was captured, however that could be apocryphal because Wikipedia never mentions an arrest, though Nelson spent some time working for a bootlegger in Sausalito.

Now to indulge your speakeasy fantasies you have to visit the Disney-like simulacra we have, like Bourbon & Branch, where nonetheless the drinks are probably far better than what you would have gotten in the blind tigers of yore. So maybe we should just be grateful for that, as well as the ability to drink without fear of landing in jail.

The arrest of high-profile San Francisco political consultant Enrique Pearce in May of 2015 made waves until it didn't, with a bust for over 4,902 images of children in sexual situations leading

—
Cafe du Nord And Elixir Were Both Speakeasies, And More Fun Facts From Prohibition-Era San Francisco
Share this