As a German refugee traveling the United States during the 1930s, the photographer John Gutmann described himself as "in paradise" in San Francisco according to the history blog Weimar Art. Shooting mostly the steep streets and plentiful cars of the day, Gutmann also captured the above image from a 1935 Nazi rally at San Francisco City Hall, an event staged by the local German Consulate.

To the contemporary viewer, Gutmann's picture is jarring — it looks fake, or pulled from the Amazon TV show The Man in the High Castle, an adaptation of the novel by the highly influential science fiction writer Philip K. Dick. That work explores an alternate history in which the Germans and Japanese won WWII, dividing the American spoils between them. Occupied San Francisco was the capital of the "Japanese Pacific States," and New York the home of the "American Reich."

In the show's version of events, the San Francisco Nazi Consulate is here, perhaps in the Presidio. 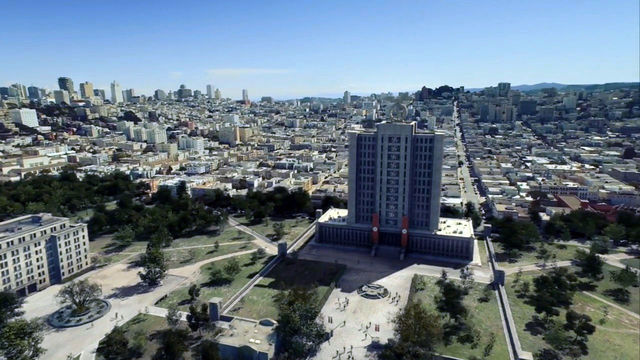 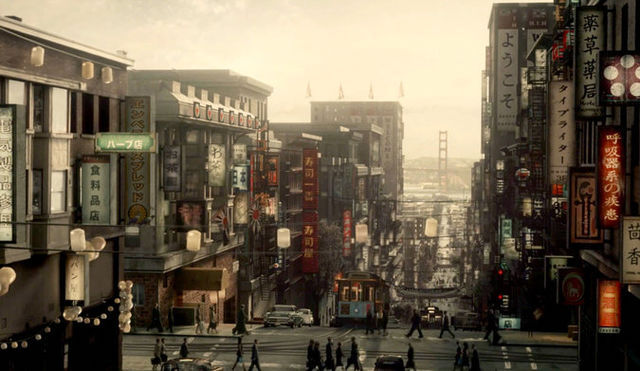 But, if not altogether stranger, the truth can be just as strange as fiction. This week, the Chronicle recalled the real, non-fictional Nazi consulate located in San Francisco. That was in the Whittier Mansion on Jackson Street at Laguna, sold to the German government by its original owner and inhabited by a top aide to Adolf Hitler, Fritz Wiedemann. He stayed until shortly after the bombing of Pearl Harbor, when the house and all of his belongings were seized by the US government as he fled the country.

Another odd relic of history is this Paramount news reel from May 7, 1941. Mere months before the US entered WWII, a Nazi-themed party was held in San Francisco, its spirit lighthearted or even satirical. In hindsight, it's nonetheless chilling.

How much would this newsreel fetch in the world of The Man in the High Castle, where images of alternate realities are sought by the Japanese, the Nazis, and members of the American resistance as a mysterious tool in the war for the future?

Philip K. Dick published his short book, set mostly in San Francisco, in 1962. The first season of Amazon's adaptation, which toggles back and forth between the East and West, was released in 2015, the second season last year. But under the specter of fascism cast by the Trump administration, many critics have observed, The Man in the High Castle has taken on new resonance. Writers like Sophie Gilbert for the Atlantic have called it "newly painful [and] also newly relevant." In her reading The Man in the High Castle proposes that "Storytelling can change the world. Whether in print or onscreen, fictional societies are thought experiments that allow us to hold our own up to greater scrutiny—to probe its weaknesses and imagine the worst. In contemporary America, watching this dystopian fantasy of Nazi rule is as often illuminating as it’s uncomfortable."

But what to do when our day-to-day lives come to resemble the terrifying fictions we'd tried to relegate to the page or screen? As the New York Times' James Poniewozik wrote of the show's second season, "“The Man in the High Castle” seems both a timely provocation and a holdover from another era — an artifact from an alternative timeline in which, if you wanted to ask, “What would I do if it happened here?” you had to watch a TV show."

In a rebuke to President Donald Trump's executive order to cut federal funding to Sanctuary Cities — municipalities like San Francisco, New York, and Los Angeles with policies of non-cooperation with federal immigration authorities — this afternoon a rally formed on the steps of San Francisco City Hall around local political leaders who vowed to protect our Sanctuary City status.

This is not the City Hall of 1935 that John Gutmann captured in black and white, but it's the same building in the same universe on the same historical timeline. In another uncomfortable blast from the past, it was just yesterday that the San Francisco school board symbolically repealed a long-unobserved law that once really held sway here segregating Asian students from white ones. In the San Francisco of the fictional Japanese Pacific States, it's the American internment of Japanese rather than the Nazi genocide of the Jews that's taught in history classes at Japanese schools for American students, an atrocity recalled alongside lessons about slavery and Native American genocide.

With real legacies like our own and actual images of Nazi flags hanging in City Hall, who needs an alternate history? What we really need is an alternate future.

You thought we were rid of them when they got hauled off to Arizona last month, but Uber's self-driving cars are back on SF streets after barely a month. As CNet reports, the

It's obviously too chilly out for ice cream — but that doesn't shorten the lines at Bi-Rite Creamery ever, and, technically, gelato is served warmer than ice cream, making for creamier scoops and providing