My fellow Americans on Twitter. It is with great honor that I announce to you today that a cornerstone of 21st Century American democracy, the peaceful transfer of the @POTUS Twitter account, has been achieved.

President Donald Trump, who for years has proven a prolific tweeter on a wide variety of subjects including the goodness of Vladimir Putin, the citizenship of Barack Obama, the badness of Saturday Night Live, and all manner of other pressing issues, has said that he plans to maintain his current Twitter account, the elegant @realDonaldTrump. There, Trump has amassed about 20 million followers, a number that in typical Trumpian hyperbole he has vastly overestimated.

As the new President has stated many positions on many subjects to which he shows no allegiance, we'll have to wait and see what he does with the two accounts. In speaking to the UK's Sunday Times, Trump explained that "the tweeting, I thought I’d do less of it, but I’m covered so dishonestly by the press — so dishonestly — that I can put out Twitter.... I can go bing bing bing . . . and they put it on and as soon as I tweet it out — this morning on television, Fox — ‘Donald Trump, we have breaking news’."

Now Trump can go "bing bing bing" with his little bing bing bingers from whichever account he chooses. It is, however, Twitter's policy to ban accounts used for the same purpose, leaving Trump a tough choice: Which one will he use to tweet about the lying, dishonest cast of the Broadway musical Hamilton?

In related news, a search for the Twitter account of the first lady gave me some initial hope:

But that was quickly dashed. Michelle Obama now has the account @FLOTUS44, and @FLOTUS is held by the unironic anti-cyber bullying advocate Melania Trump, Mr. Trump's third wife and the first immigrant to become First Lady of the United States. 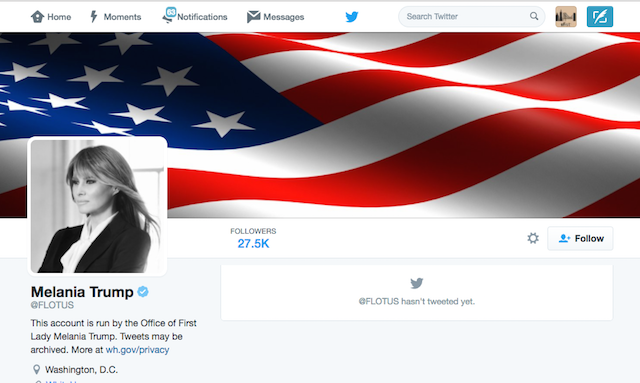 In a similar fashion, Barack Obama, the 44th president of the United States, has a new official Twitter account, in addition to his existing personal account. That's @POTUS44.

One more holdover from the Obama years remains on the new @POTUS account held by Trump, however: As Slate points out, the background picture for the account is from Obama's inauguration. Follow or unfollow accordingly, folks. The good news is you're not automatically enrolled, so to speak:

Oh interesting, Obama’s account has been changed to @POTUS44. So you’re not automatically following Grand-Wizard Tinyhands.

And feel free to log off. That's even easier.

Previously: Trump Won't Use @POTUS Twitter Handle, Will Use Current Account To Keep Whining About SNL For Four Years

You've heard a lot about marches and peaceful protests happening around the Bay Area this weekend, marking the inauguration of (hack, gag, here I go typing it for the first time) President Trump,

In 2015, M. Night Shyamalan returned to the horror genre with , a film that was his best in over a decade. Now he's back with Split, another horror flick that, while not quite