It might take Jedi mind tricks to convince billionaire filmmaker George Lucas to place his Museum of Narrative Art on Treasure Island, but rest assured, Mayor Lee is trying the next best thing: increasingly desperate tweets.

Update: That didn't work, and Lucas is taking his museum to the Dark Side, by which I mean Los Angeles. Our sibling site LAist thrilled to the news.

Magnanimous in defeat, Mayor Lee issued a statement: “I am disappointed, of course, but must respect the decision by Mr. Lucas, Ms. Hobson and the Board of Directors to site the Lucas Museum of Narrative Art at the existing Exposition Park in Los Angeles. I am pleased that the museum will be built in California for our state’s residents to someday enjoy."

On behalf of Angelenos, LA Mayor Garcetti welcomed Lucas and his decision to locate the museum in Exposition Park. "I believed in the vision for the Lucas Museum, and we went after it with everything we have — because I know that L.A. is the ideal place for making sure that it touches the widest possible audience." Garcetti also praised the collection — which sounds, frankly, a bit odd — to be housed in the futuristic space, which will be designed by the same architect who would have been responsible for the Treasure Island version. 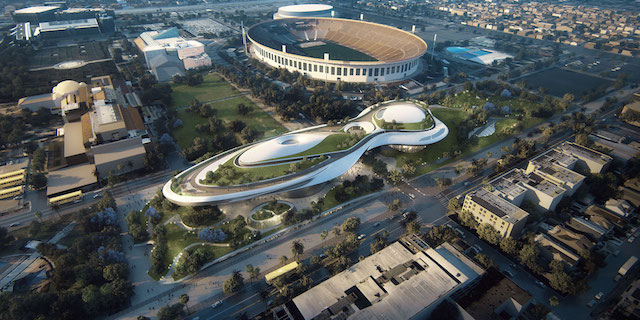 As Lucas's original design for such a museum, rendered in a poorly received Beaux Arts/Spanish revival style, was eventually rejected by the Presidio Trust in 2013, Lucas packed up his collection of graphic art and Star Wars memorabilia and headed for Chicago. There, his revamped museum plan was again greeted with skepticism and land use problems, and after two years of stalled talks, Lucas let it be known last May that he might yet return to the Bay Area with a new design for Treasure Island rather than the Presidio.

Ma Yansong of MAD Architects, the architect behind the more favorable, futuristic Chicago plans, cooked up a cool, cloud-like building design for Treasure Island. Even before seeing those, the Chronicle's architecture writer John King emphasized that the Museum could do wonders for anchoring development on Treasure Island — although it would need to ensure proper transportation to and from the island, he cautioned, likely in the form of ferry service. The project is valued at $1 billion, and it's particularly attractive because Lucas would build the museum with his own funds.

Progressives like Jane Kim and Aaron Peskin were even receptive to the idea, and later, a full page Chronicle ad paid for by the tech sector city policy group sf.citi and backed by signatories like Gavin Newsom, Dianne Feinstein, Willie Brown, and David Chiu, implored Lucas to put the museum on Treasure Island.

Lucas's team is expected to begin final deliberations over the museum plan today, CBS 5 reports, with the choice for the project coming down to San Francisco or Los Angeles. Though Treasure Island is closer to Lucas's Skywalker Ranch in Marin, Los Angeles could be dearer to his cinematic heart, especially after what he might regard as poor treatment in his Bay Area home.

So, to make his final case, Mayor Lee's only hope was Twitter, where he blasted out a shot from a photo op with proponents of the narrative art museum on Treasure Island.

The wisest choice for the George Lucas Museum, San Francisco is. pic.twitter.com/uheBItlyvs

Claiming he'd pursued Lucas after he departed for Chicago, Lee told reporters at a press conference that ,“I kept in touch saying, ‘Hey, if things don’t work out'”

The Lucas team is weighing seven acres of downtown LA land, leased for just $20 a year, versus the $23 million to purchase the Treasure Island site. There are other considerations, too. “They want to be sure the building will withstand sea-level rise,” City Project Manager Adam Van De Water said. “They are looking at seismic performance for the building and some of the geographic and temperature conditions of being here on the Bay.”

Last, just so Lucas knows he's serious, Mayor Lee has pinned the following tweet to the top of his feed.

What better place to ignite the power of imagination & inspire future innovators than continuing the legacy where it began #SF #LucasMuseum pic.twitter.com/7OEvKmy4fd

Ever in expansion mode, Back of the House Restaurant Group  a.k.a. prolific local restaurateur Adriano Paganini  is looking to expand the footprint of their original, flagship Super Duper location on Market

—
[Update] Lucas Museum Turns To The Dark Side, Is Bound For LA Despite Mayor Lee's Brown-Nosing
Share this