Back in the summer there was a NIMBY kerfuffle downtown in which some three dozen residents of the Ritz-Carlton Residences were trying to block the liquor license transfer of Dada Bar, the 10-year-old art-themed bar/gallery at 82 Second Street that wanted to move into expanded digs in the arts-friendly Mechanics' Institute building on Post Street, because their lease was expiring. The space in question, nearly three times as large as the original Dada Bar, was once home to the famed Old Poodle Dog restaurant, and had been empty for some time. Now, as the Chronicle reports, the dispute was resolved, the liquor license transferred thanks to the Board of Supervisors, and Dada Bar reopened in its new digs on Monday.

Owners Timothy Landregan and Michael Gouddou tell the paper they think "San Francisco needs thought-provoking art now more than ever." The new, larger space they say will not only provide a social spot for the community, but will also provide a much needed space for exhibiting the work of up-and-coming artists. "There’s a lot of high art, expensive art in the city," Gouddou tells the paper. "But the up-and-coming artists don’t have opportunities to have their work seen."

The Dada Bar project sounds not unlike that of 111 Minna Gallery, which has been bringing together up-and-coming artists and alcohol-fueled parties for two decades now. 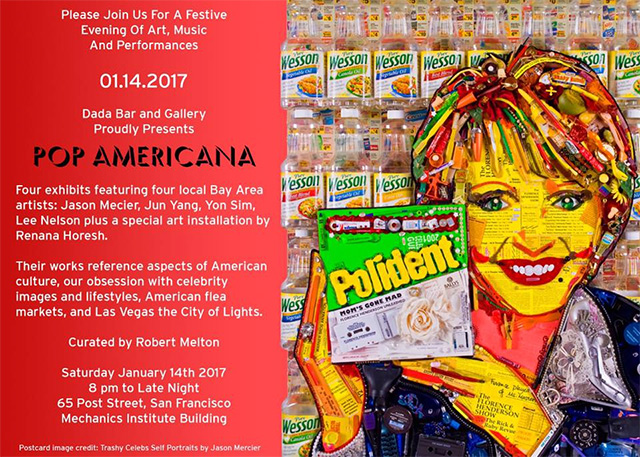 The executive director of the Mechanics’ Institute, Ralph Lewin, tells the Chronicle that he hopes that Dada Bar will help launch a revived, modern version of the artists' center known as the Montgomery Block, a.k.a. the Monkey Block  the original was where the TransAmerica Pyramid currently stands. Lawrence Ferlinghetti one called it the most famous literary and artistic structure in the West," and Lewin mentions that writers like Ambrose Bierce, Jack London, and Mark Twain used to be brought together there to gather at the nearest bar, and "share ideas."

Landregan says "Now is the time we need these safe spaces," because just like in earlier eras, and maybe even moreso, artists need places to gather. And Dada Bar will be serving cocktails and coffee and tea throughout the day, as well as pastries.

But how much are those cocktails? Artists don't really spring for the craft variety, typically.

Pass the beer bong, bro. Despite the high cost of living, San Francisco just got named the top "major metro" for college students by the American Institute for Economic Research. According to the

The renowned Chinese-American artist Sarah Sze has withdrawn her proposal for a public artwork in Chinatown, a clear favorite among a hundred that were considered. The problem: two groups were at odds over