To ensure a truly clean slate for 2017, the San Francisco Public Library is offering amnesty to all 55,000 of its patrons with fines for overdue items of more than $10.01, the threshold for revoking check-out privileges. Library Public Relations Officer Katherine Jardine recalls that the Fine Forgiveness Period was a huge success in 2009 when it was first and last instituted: More than 30,000 overdue items were recovered, and more than $50,000 in fines were forgiven.

"The program is something we're all very excited about because our mission is to provide free and equal access to everybody," Jardine tells SFist, "and unfortunately the populations that most need the library have a barrier to access when a ten dollar fine is on their account. Something like a fine forgiveness program helps us continue to serve the people who need us the most."

Sharing one story that might stand for many, Jardine references Joanne Hall, a former library patron who still has a copy of Atlas Shrugged that she borrowed in the 1980s. Hall plans to return the book during the fine forgiveness period, ending her long, heroic effort to keep the disastrously bad Ayn Rand novel away from impressionable readers. A valiant fight, Ms. Hall: We salute you.

"We're focusing on being as welcoming as possible," Jardine says. "People who have fines on their account can feel embarrassed, or ashamed, or feel like they're 86ed from the library — which isn't true, as they can still come in and use our resources, they just can't check items out of the library." That's to say the fine forgiveness program is important symbolically, not just practically. "It's a way for us to say, come in and continue to come in, we're here for you." While citing the example of several other library systems, including Chicago's, Jardine remarks that such programs are relatively new in a system that's relatively ancient.

No one library overdue fine is so large, Jardine explains. "We stop the fines at 10 dollars, so there isn't a fine that's greater unless someone has misplaced an item, and at that point, the replacement fee is the value of the item, and that can be large — if someone misplaced a DVD set, for instance." Naturally, those steeper fees for lost items aren't being forgiven during the amnesty period. "Unfortunately, we will not be able to forgive charges on your account for a lost or damaged item," reads an FAQ section. You can, however, pay the replacement cost during the fine forgiveness program and have your additional overdue fines waived.

In the holiday spirit of forgiveness, Jardine also showed no animosity toward Airbnb when I sort of rudely brought up an old attack on the library system by San Francisco's favorite tenant, Airbnb. To drudge up the past/jog your memory, during a wrongheaded ad campaign last year, the company wrote this:

Translation: we don't understand allocations and gonna pretend like the library gets all of it, not 1.4 %. #airbnb pic.twitter.com/twxhPDDU8M

As Jardine put it gracefully: "I guess for us I think the community responded [to the ad], and the type of love the library received from the community was really powerful. People were advocates for us on that."

Last, fans of the classics will be glad to see the library worked with a local organization appropriately called Recovering the Classics, part of Creative Action Network, for their ad campaign on the forgiveness program. Here's just one of the reimagined classic covers highlighted by the SFPL which you can expect to see in transit shelters. 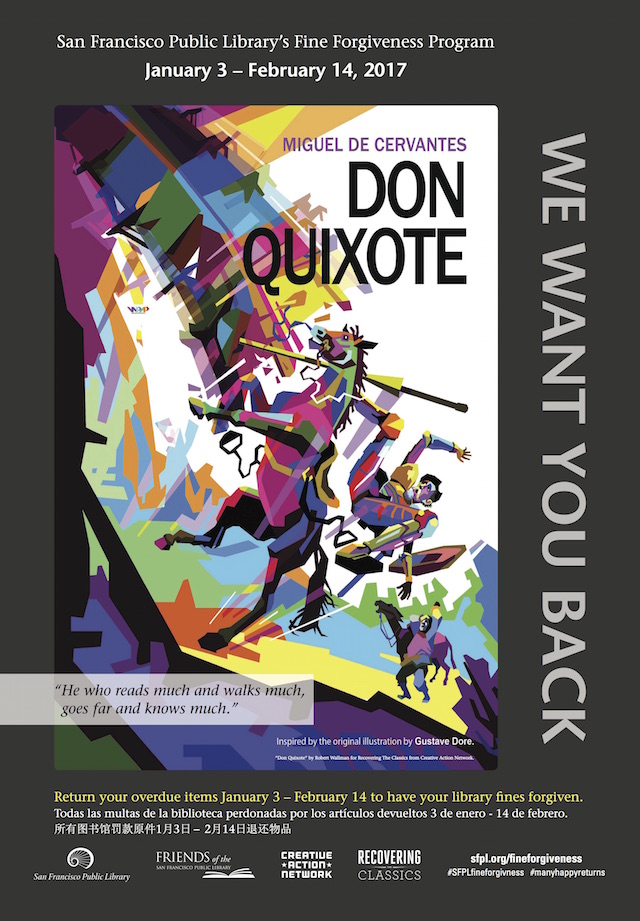 Jason Chan's time as a commissioner with the Rec and Parks Department was short and not particularly sweet. The Chronicle reports that the former Ed Lee campaign worker resigned from his post mere

Its populations originally decimated in San Francisco Bay during the Gold Rush and the consequent pillaging of every local source of food (more about that here), the Olympia oyster  the West Coast's only

—
The Library Forgives You, 55K Patrons With Overdue Fines, During Amnesty Period Next Month
Share this