We first learned in September of prolific local restaurateur Adriano Paganini's plan to bring an upscale Mexican concept to the former Betelnut space on Union Street  which he snapped up following that restaurant's closure and the success of his Belgian restaurant Belga next door. Now, as of Monday, that restaurant is open, and it's called Flores, after Paganini's partner in the venture and former Beretta employee Luis Flores.

Heading up the kitchen is chef-partner Alejandro Morgan (Lolinda), and the restaurant features a menu with a mix of smaller plates like quesadillas, salads, and taquitos, as well as homestyle shareable platters of carnitas, pok chuc, and carne asada, and individual entrees like Chile Colorado, and a whole marinated and roasted branzino. Also, of course, there are margaritas by the pitcher, and seven house cocktails including a Paloma, and a mezcal Manhattan of sorts called the Ghost Ride, with mole bitters.

Flores and Paganini also partnered on Uno Dos Tacos, which has a successful outpost downtown, and they have plans to expand that into a chain. Meanwhile, as Paganini told Eater earlier this year, after working with Flores for 15 years, they started batting around this more involved, full-service restaurant. "[Flores] was at Pasta Pomodoro, then at Beretta, and he's Mexican and he's passionate about Mexican food," Paganini said. "His family had a restaurant in Mexico, so we said let's do a Mexican restaurant. I'm also passionate about Mexican food because I love it, but that's not enough. I need someone else to have that passion."

As Inside Scoop points out, the Marina/Cow Hollow environs already has quite a bit of Mexican food and taco options, including Tacolicious, Sabrosa, Tacko, Mamacita, and Don Pisto’s, so the Flores team may have their work cut out for them to stand out amidst the competition.

But Paganini is no fool about these things, and this is now the 22nd restaurant in his swiftly growing local empire, which includes Super Super, Beretta, Delarosa, Starbelly, Lolinda and the recently open fried chicken sandwich spot, The Bird. 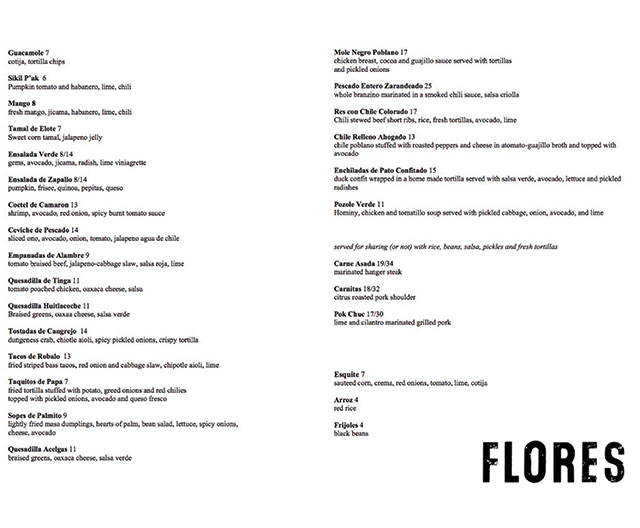 Developers initially intending to turn a Mission District auto shop into 20 units of housing have backed away from that plan following a ruling by the city that the building has historical significance.

"Most of the patients I see as a psychiatry resident at the Zuckerberg San Francisco General Hospital are very ill," Alison Hwong, a psychiatrist in her residency at UCSF, writes in an op-ed

—
Now Open In Cow Hollow: Flores, From The Belga And Uno Dos Tacos Team
Share this