Emphasizing the scale of the problem facing developers and residents, scientists with the European Space Agency last week announced that the tilt and sink of San Francisco's Millennium Tower is visible from space. The Business Times picked up the report, and noted that the agency was monitoring the San Francisco area as part of a study on subtle ground shifts in urban areas.

"The Sentinel-1 satellites have shown that the Millennium Tower skyscraper in the centre of San Francisco is sinking by a few centimetres a year," read the findings. "To probe these subtle shifts, scientists combined multiple radar scans from the Copernicus Sentinel-1 twin satellites of the same area to detect subtle surface changes - down to millimetres. The technique works well with buildings because they better reflect the radar beam."

A decidedly more high-tech approach than rolling a marble across an apartment floor, the image above depicts areas of little to no movement in green, with the colors yellow and red representing spots with higher movement. Zooming in on the high resolution image does indeed show two red spots jumping out of a sea of green at what appears to be the tower's location.

Originally named one of the world's top 10 residences, word of problems at Millennium Tower first came out earlier this past summer — with reports that the building had sunk 16 inches leading to a flurry of threatened lawsuits and attempts to shift blame. Developers said construction on the nearby Transbay Transit Center was to blame, while others questioned the decision to not drill down into the bedrock.

With the latest civil suit against developer Millennium Partners alleging that the city and the Transbay Joint Powers Authority conspired with the developer to hide information about the building's excessive settlement from potential buyers, the ongoing saga of the Leaning Tower of San Francisco is sure to drag out for some time.

Thanks to the European Space Agency, we now can watch the entire thing unfold from space. 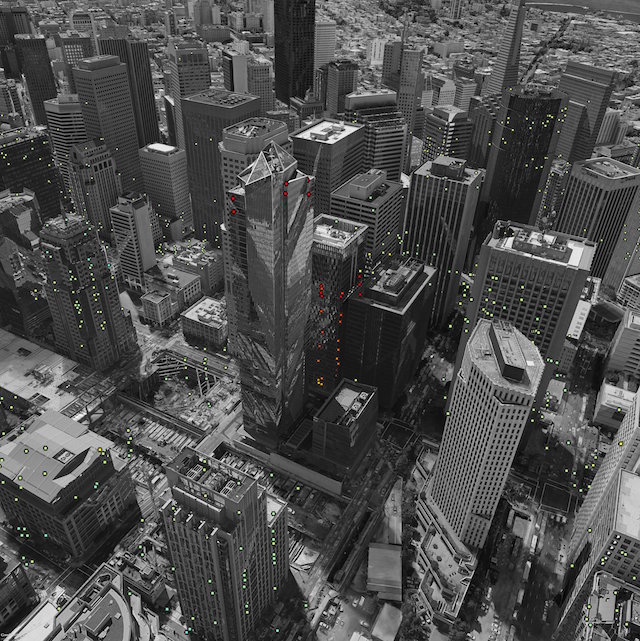 All previous coverage of the Millennium Tower of SFist.

University officials around the country, including those in California, are urging students living abroad who have DACA residency status as the children of immigrants that they should return to the U.S. before

—
Scientists Can See The Millennium Tower's Tilt From Space
Share this