When the yugest, really the most tremendous Christmas tree in San Francisco is lit up in a ceremony on November 29th, Donald Trump won't be there to flip the switch, but his spirit will nevertheless grace/preside over/haunt the proceedings.

That's because the tree lighting, the most prominent in the city, is at 555 California, formerly the Bank of America Tower. The building hasn't served as a focal point for anti-Trump protest in the way that New York City's Trump Tower has, but it may yet: 30 percent of it, San Francisco's second-tallest skyscraper (until the Salesforce Tower is complete to demote it), belongs to the President-Elect's company. And the way he brags about it, you'd be forgiven for expecting that percentage to be greater.

"I own a big chunk of the Bank of America building and 1290 Avenue of the Americas that I got from China in a war," Trump claims in this 2015 video announcing his presidential campaign. "Very valuable. I love China."

It's unclear to what war Trump might refer, other than feuds of his own making. Vornado Realty Trust, which is publicly traded, announced in 2007 that it had acquired a 70 percent stake in those two buildings, the former in San Francisco and the latter in New York City, from US entities under the control of a Hong Kong investment group. Per Forbes, Trump was a limited partner in that investment group, Hudson Waterfront, with whom he had a strained relationship, In fact, Trump sued the group unsuccessfully: A court ultimately dismissed all of his charges.

Forbes characterized the "deal" as a situation in which Trump was left "holding the bag," and as the New York Times explained matters, "Instead of receiving the cash he wanted, Mr. Trump had to accept a 30 percent share in the profits from the two Bank of America buildings, tied up in a partnership that is slated to last until 2044." But as is Mr. Trump's talent, he massaged the truth of the legal defeat into a fiction of successful deal-making. 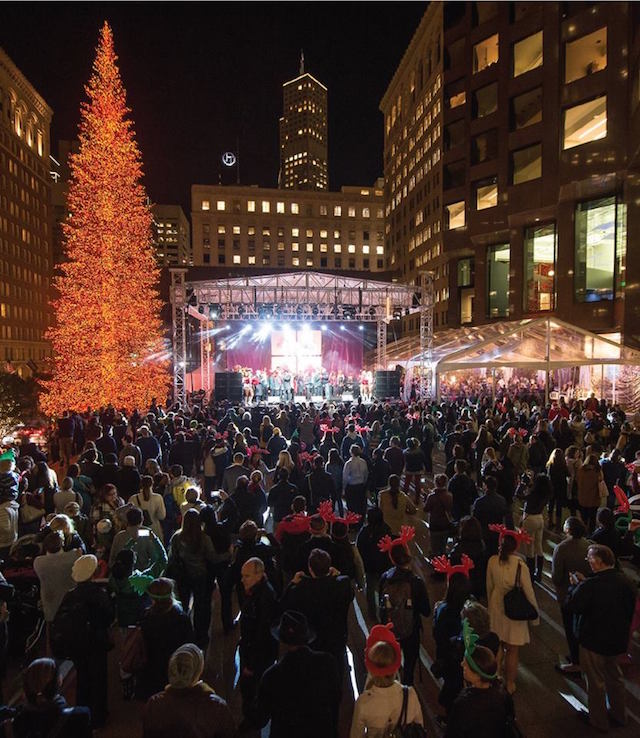 While Trump's limited share in the building and perhaps a modicum of good sense has kept him from slapping his gilded name on the exterior of 555 California, to those in the know, the building has already served as a symbol of his influence on the West Coast. It was the local epicenter, for example, of a "Boycott Trump" demonstration in September with protestors there demanding he negotiate contract with unionized workers in Las Vegas.

Now, celebrating its 10th year tree-lighting at the location this month, local charity All Stars Helping Kids (ASHK) is in the perhaps politically uncomfortable position of feting the holiday season in the shadow of a building with new (to some, dark) significance.

ASHK was founded to help youth experiencing poverty in 1989 by NFL Hall of Famer Ronnie Lott. Its decade-long tradition of tree-lighting at 555 California naturally precede's Trump's influence on the building and his recent election to the presidency. In past years, sports dignitaries Jerry Rice and Joe Montana have presided over the holiday ceremony, and this year, the festivities will include a performance from the Doobie Brothers.

The public is told to "Stay tuned for announcements on additional musical talent along with celebrity and special guest appearances." While Trump is unlikely to show his face and Lott is wiser than to send Colin Kaepernick to the occasion, the event seems ripe for a political statement of some kind, something along the lines of a prayer for America or a candlelight vigil. You know, nothing that violates the sanctity of Christmas or contributes to the perception of a liberal war on the holiday. It is, after all, a sacred celebration of the felling of an 80-plus foot white fir tree from Shasta County and the ceremonial decoration of its carcass in thousands of shimmering lights.

This compact Kickstarter success is now coated in 24-karat gold plating. The KeySmart Extended Key Organizer: 24K Gold Edition combines our two favorite things: knowing where our keys are at all times, and

Late Friday, Mark Zuckerberg sought to quell the angst about Facebook losing the election for Hillary Clinton by posting a pledge to try harder, as a company, to combat the proliferation of fake

—
SF's Tallest, Most Tremendous Christmas Tree? It's At A Building Partially Owned By Donald Trump
Share this