Some of us are going to default to being quiet and trying to stay in a dark room with pillows and Netflix/Amazon/Xfinity access for the next few weeks as the only way to get through what happened in this horrifying election. I'm not going to advocate for substances or mood-improving drugs but hey, if you have those, godspeed. Despite those urges, this is also a time for loud resistance and protest, and some Bay Area residents took to the streets already, Tuesday night, before Hillary Clinton had even conceded this disaster.

Here's what we've seen so far via the Bay Area media and our own cell phone cameras when it comes to everyone being horribly sad and baffled that an orange fascist with sexual assault and racist tendencies is now our president, but hey, yay America. We'll add to this post as needed.

There were rumblings of a march down Market Street in San Francisco that have yet to emerge, and there was immediate evidence of one in downtown Oakland, in addition to a protest that stalled traffic on Highway 24. As KTVU reports, windows were being broken in Oakland, and BART's 12th Street Station was shut down for some period of time. Below you can also see a video shot in Berkeley in which people are shouting "Not Our President!"

Protests break out in #SF and #Oakland over Donald Trump victory. pic.twitter.com/sZ53vNwvav

Hwy 24 near Claremont Ave exit in Berkeley shut down as protests erupt around Bay Area pic.twitter.com/qqwsw4UWNf

Part of protest - about 80 people - continue protesting down Telegraph past 46th pic.twitter.com/JB7ABvB3SE

As seen on a sidewalk around midnight at Market and Noe. 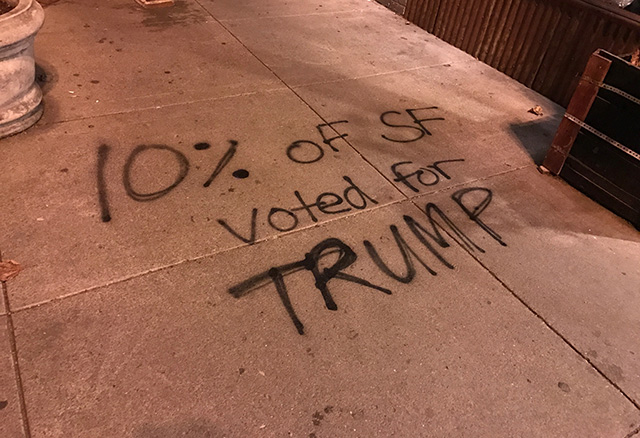 The scene at Scott Wiener's victory party at Beaux, which was kind of unhappy. 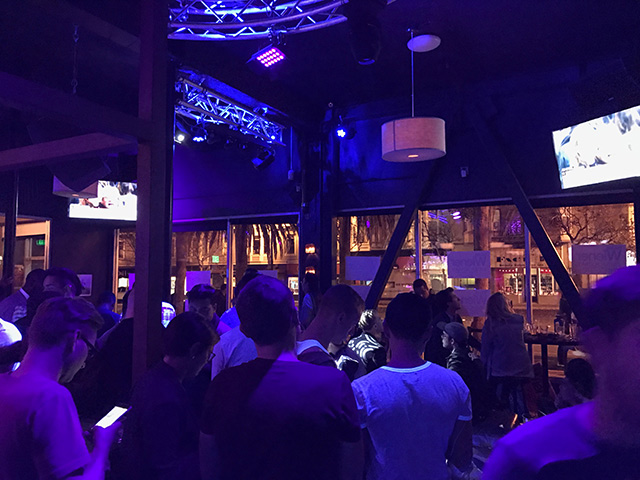 To our north, a protest broke out in Portland, OR.

After the wonderful Obamas it is going to be horrifying to see that awful family in the White House. It's like a John Waters movie. https://t.co/9sUjQcw8jV

Congratulations to President-elect Donald Trump. He has an awesomely difficult task, since it is long past time for us to face up to our country's problems. We're going to need all hands on deck.

First, find a boat/ship someone in California will join you and Donald on, Pete.

Below, some video from 14th and Broadway in Oakland.

In a post-election landscape where nearly all local victories has been eclipsed by the results of the presidential election, it might be hard to gin up the energy to care who won San

San Francisco and the Bay Area have always been the beacon for progressive movements, whether ideological in nature or in emerging tech industries. The Bay Area, due to it’s huge economic size