As part of a viral Facebook status update, some Facebook users are showing their support for protesters of the Dakota Access pipeline by using the site's "check in" tool to "confuse" authorities who may or may not be monitoring social media.

Yesterday and today you may have been confused yourself by some such check-ins at the sixth-largest Native American reservation, in terms of land area, within the United States. But as usual, your friends on Facebook may be more social media activists than boots-on-the-ground protesters. Most of them aren't there, and that's precisely the point — one driven home to me when my roommate in San Francisco suddenly appeared to be at Standing Rock. He later clarified with the text of a viral post: 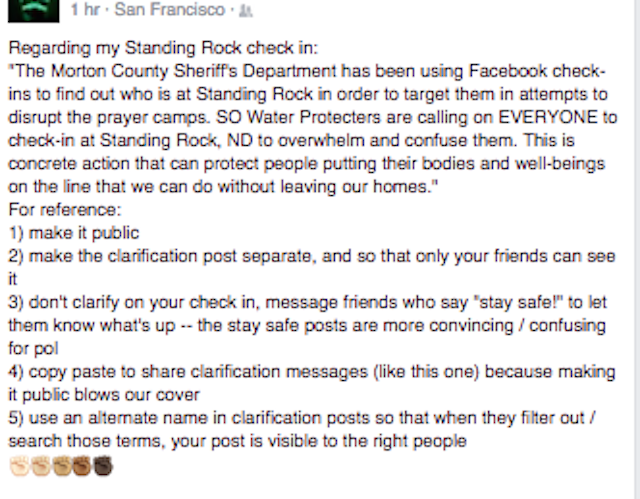 It's common practice for law enforcement to consult social media in a form of surveillance that is varying degrees of hair-raising. In an extreme example, the ACLU called out Twitter, Instagram and Facebook this month for selling information to Chicago-based Geofeedia, a "location-based intelligence platform" that has encouraged police departments to buy its services in order to track Black Lives Matter activists and others. 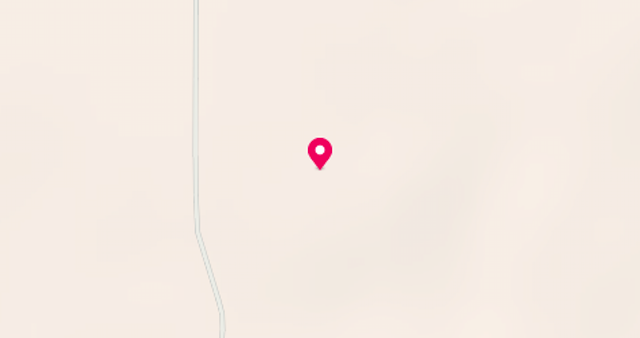 Meanwhile, the Sacred Stone Camp's Facebook page, one of many sources for information on the protest, writes that the "Facebook Check In" action "did not originate from the Sacred Stone Camp FB page." That said, they "support the tactic, and think it is a great way to express solidarity." Further, administrators of the Facebook page observe, "The check in's have created a huge influx of media attention that we appreciate. Our growing massive social media following plays a key role in this struggle."

Of course, there are more effective actions to which the Sacred Stone Camp Facebook page points: "We would like to see these thousands of people take physical action to demand that their banks divest, their police forces withdraw, and the Army Corps and Obama administration halt the construction of this pipeline," representatives write. Also, checking in IRL would help: "We also need 10,000, 100,000 people to join us here on the ground," they say. "Now. Join us!"

It was ten years ago today that someone fired a gun into a crowd of Halloween revelers at the annual Castro block party, hitting nine people, with another person injured in the resulting

How should SF schools manage struggling teachers? [SF Chronicle] The snow in Tahoe is lovely. [KRON 4] [Bloomberg] cites "Two New Charts" that they say "Prove San Francisco Rents Are Out of Control.