To say that San Francisco housing is overvalued, inflated to the point that it borders on a bubble, might seem to imply that these prices might go down, the bubble bursting or at least letting out air. Who knows on that count, but a new UBS Wealth Management Report, its annual Global Real Estate Bubble Index, stops just shy of placing San Francisco in the bubble category.

San Francisco is number seven on that list, as Bloomberg echoed its findings, the highest spot of any US city. New York and Boston remain fairly valued according to the index, with Chicago's values depressed.

The basis for the index, Socketsite explains, is a comparison of current price-to-income (PI) and price-to-rent (PR) ratios in each of the cities to their historic norms. “A change in macroeconomic momentum, a shift in investor sentiment or a major supply increase could trigger a rapid decline in house prices," Bloomberg quotes UBS.

a little on the nose, guys pic.twitter.com/n2sBcMhlOI

"What these cities have in common are excessively low interest rates, which are not consistent with the robust performance of the real economy,” Socketsite quotes Claudio Saputelli, Head of Global Real Estate in UBS Wealth Management’s Chief Investment Office. “When combined with rigid supply and sustained demand from China, this has produced an “ideal” setting for excesses in house prices.” 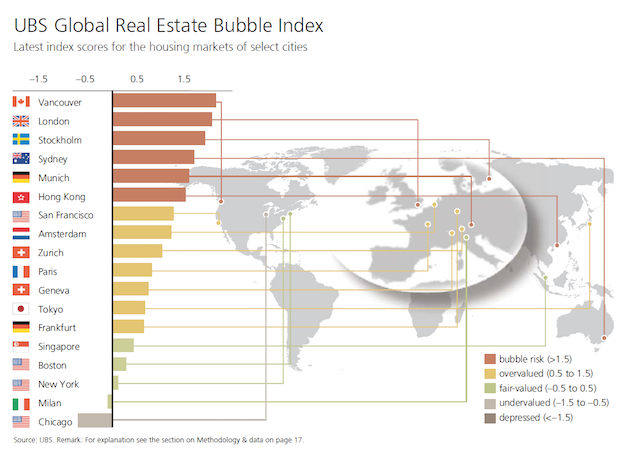 At least we're not Vancouver, London, or Stockholm — right, team? And, important to note: The survey of cities didn't include many in China with runaway booms on their hands. Instead, it was made up of a preselected group of 18 cities for the sake of comparison.

Anyone who's ever taken the Octavia exit off 101 has seen and likely loves the mural gracing the side of Extra Space Storage. The puffy clouds painted on a bright blue sky provide

On the Saturday morning before this year’s Folsom Street Fair, while most of us were still blacking our boots or rigging our pony carts, a social media skirmish broke out regarding the