On the Saturday morning before this year’s Folsom Street Fair, while most of us were still blacking our boots or rigging our pony carts, a social media skirmish broke out regarding the rights of photographers versus the rights of the scantily clad at sexy large-scale events like this one. The target of this ire was the Ask First campaign, a volunteer group of advocates responsible for the little yellow “Ask First” stickers seen above. Ask First’s mission is to require consent before touching and engaging with others, and they extend this concept to taking pictures, too. But some photographers have pushed back against the campaign, exposing a complicated conflict regarding street photography and public nudity in the age of self-publishing, viral image-sharing, and facial recognition technology.

Photographer Tony Perez, whose status below was a widely shared screenshot on social media Saturday, is not some random Internet troll. He's been a pretty accomplished burlesque scene and concert photographer for years. Attempts to reach him for comment in this article were unsuccessful, but the status below certainly contains comment.

Not particularly artful language there, but the guy has a technical point — there is no legal requirement to get consent or permission to take photos of nude people at the Folsom Street Fair. “The fair takes place on a public street and as such, there are no restrictions on photography,” Folsom Street Events executive director Demetri Moshoyannis has said in past interviews. “We do ask photographers to ask permission as a matter of courtesy and mutual respect.”

That ‘courtesy and mutual respect’ component is what Ask First is trying to push, and plenty of photographers have pushed back. “This is not the first discussion I’ve had with photographers about this topic,” Ask First founder Maxine Holloway told SFist. “I have several other emails in my Inbox from photographers expressing disdain for this campaign.”

Funny, because we here at SFist post an NSFW set of explicit Folsom Street Fair pictures every single year on the Monday after the fair. We get them from the Flickr sets of photographers with whom we have a level of trust. In some cases, the consent is obvious because the naked people are conspicuously posing for a photo (NSFW link). In other cases, the consent is implied because the individuals are hamming it up in a public scene of bondage (NSFW link). But we also have incidents of some naked shlub standing in the background (NSFW link) or straight-up boob shots (NSFW link). 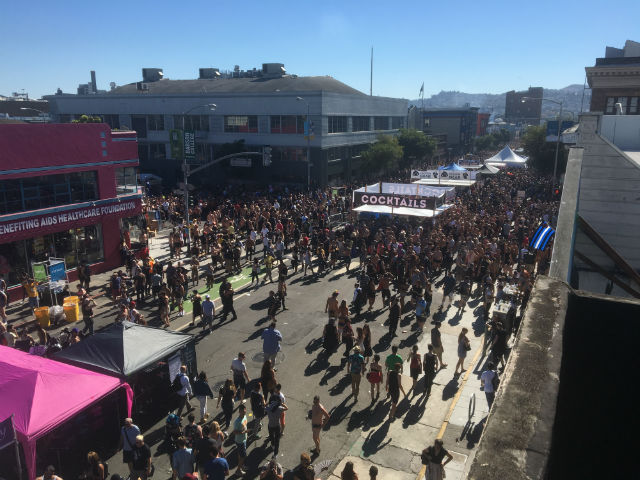 It’s unclear whether the naked shlub or the boob shot subject gave permission to be photographed. Heck, I even posted the image above as my Facebook cover photo — featuring roughly 2,000 Folsom attendees whose permission I did not receive to photograph. I patted myself on the back for being so ethical, because surely none of these 2,000 people can be recognized. But what if some facial recognition technology comes out tomorrow that can identify them all, tag them all with links to their Facebook accounts and add “Was At Folsom Street Fair” check-ins? This technology does not currently exist, but I’d bet my left lung that Zuckerberg has people working on it as we speak. 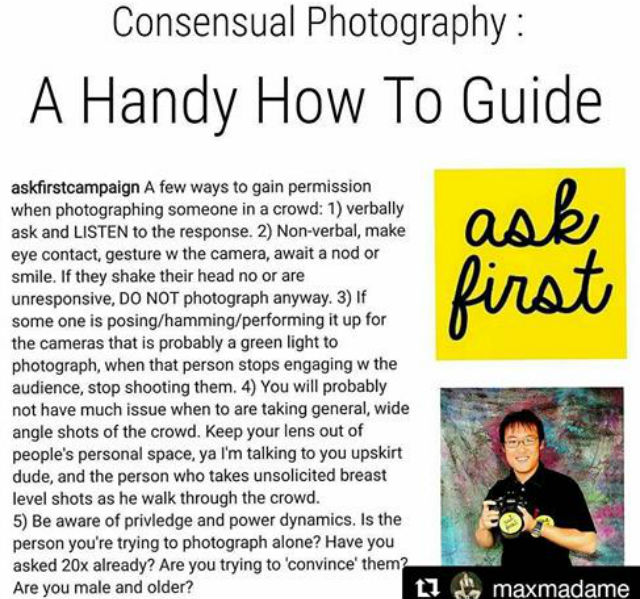 In response to this very scary gray area, the Ask First campaign put out the above “Handy How-To Guide” for consensual photography. “This guide is really for people photographing in public or in a crowd, not necessarily just for Folsom, although the stakes for Folsom photos often feel a little bit higher,” Ms. Holloway said. “When someone has their picture on SFist and is a teacher and people see them at the Folsom Street Fair, the repercussions of that can be different than if they’re at the North Beach Blues Festival.”

“I understand how photographers want to capture this really wonderful moment, but I think that people’s privacy and consent should come before that need to make a pretty picture,” she added. “If the consent and comfort of your subject isn’t really high that list, that feels really scary.”

So photographers, do have a look at the Ask First guide to street photography of public nudity. After all, we’ve still got the Castro Street Fair coming up Sunday in all of its foreskin-painting glory.

To say that San Francisco housing is overvalued, inflated to the point that it borders on a bubble, might seem to imply that these prices might go down, the bubble bursting or at

Brian Bunton, an Oakland police officer accused of tipping off Jasmine Abuslin to a coming prostitution sting in exchange for sex, was one of three officers charged last week by Alameda County District