Italian Americans helped build this city, and it's Mexican, Chinese, and Italian cuisines that inform most of the dishes we'd consider San Francisco classics. And while North Beach isn't totally where it's at anymore when it comes to finding great Italian food here (with a couple exceptions), San Francisco remains possibly the country's greatest city for sampling the regional differences of Italy, with restaurants like Perbacco, La Ciccia, and Locanda dedicated specifically to Piedmontese, Sardinian, and Roman cuisines, respectively, just to name three. With that in mind, below we bring you what we think are the best of the best for sampling the most divine pastas SF has to offer, with a few recommendations for what to order.  Jay Barmann

Acquerello
Chef Suzette Gresham's 27-year-old institution is still going strong having just garnered its second Michelin star in 2015. Along with Quince and SPQR, this is where Italian food lovers should head for a truly excellent, fine-dining experience, albeit it in a highly formal, windowless setting in what was once a mortuary. Gresham was famed for her decadent foie gras rigatoni, which doesn't always make reappearances, but some recent, delicious sounding options on the prix fixe menu include potato ravioli with caciottina di capra, smoked guanciale, and charred spring onions; and red wine-short rib saccottini with salsa rossa, glazed turnips, and lovage.  Jay Barmann
1722 Sacramento Street at Polk 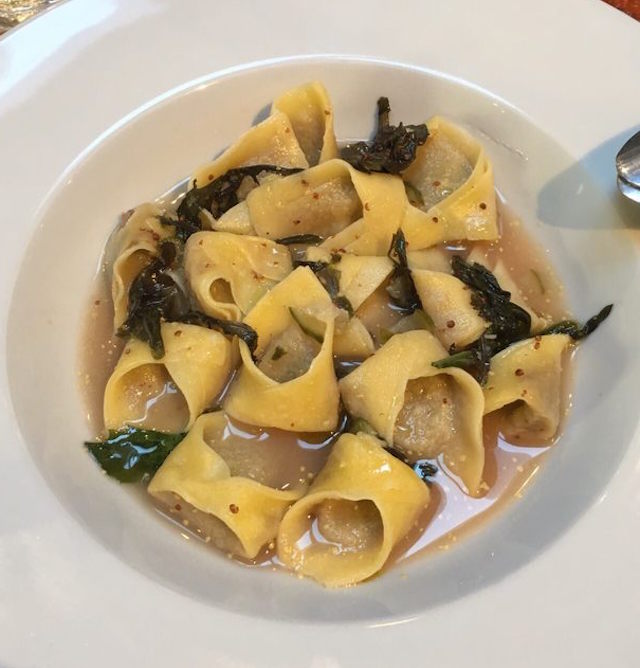 Barzotto
Fresh, handmade pasta is the first thing you'll see upon entering the classy yet casual Barzotto, opened just this August by Marko Sotto, an ex-operations director for restaurateur Adriano Paganini. The goods are in the case at the front, around the corner from the counter where diners order. Chef Michelle Minori's bucatini is fat and al dente, and her baked pastas like strozzapreti — literally "priest stranglers" — are not to be missed. Yes, you can grab fresh or dried pasta to go, which is definitely what you'll want to do after you taste it. —Caleb Pershan
1270 Valencia Street at 24th Street 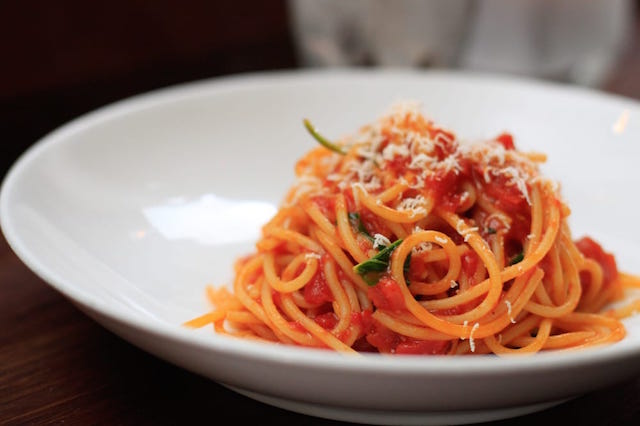 Delfina
Delfina, which absolutely doesn't sell pizza like the adjacent Pizzeria Delfina, has some of the best pasta in the city. Both the wild nettle tagliatelle and the chitarra integrale are excellent, and, they're most famous for their meat sugos, usually either pork or duck, served with pappardelle. With the reasonably priced menu, you'll also probably want to try some of their other excellent items. And if you're looking for something more traditional, the simple spaghetti with plum tomatoes is a definite win. — Jack Morse
3611 18th Street, between Guerrero and Oakwood Street

Spaghetti with meatballs at Emmy's

Emmy’s Spaghetti Shack
With its wackadoo hand-drawn menus and hefty portions, Emmy's is a family-friendly and informal affair, especially early in the evening, while later you'll notice that orders of PBR tall boys have become popular. Emily Kaplan's humble pasta restaurant grew up a bit when it moved up the street to a larger space in 2014. I'm happy to report the good vibes and delicious meatballs made the trip, too. —Caleb Pershan
3230 Mission Street between Valencia and 29th Streets 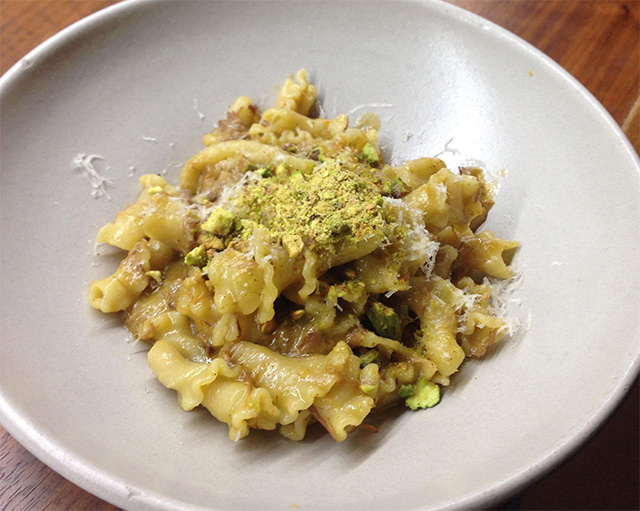 Flour + Water
As noted recently in our pizza list, Flour + Water is almost better known for their pasta than for their pizza, and chef Thomas McNaughton's flagship remains a solid place to sample the Roman classic spaghetti caccio e pepe, and agnolotti dal plin. The menu changes weekly and based on seasonal ingredients, and they offer a pasta tasting menu for $75 per person, with both omnivore and vegetarian menu options, and featuring special items not on the regular menu like, right now, duck tortellini en brodo with pickled hibiscus.  Jay Barmann
2401 Harrison Street at 20th

La Ciccia
Since 2006, native Sardinian Massimiliano Conti has been doling out some of SF's most beloved pasta at La Ciccia, the Noe Valley restaurant he co-owns with his wife, Lorella. A decade later, the place remains a hit, with their signature dish of toasted fregola (small pearls) topped with tomato, sea urchin, and grated tuna heart making "must eat" lists year after year. But just as remarkable, in my opinion, is the Spaghittusu cun Allu Ollu e Bottariga (homemade spaghetti, garlic, olive oil, and roe) and the Pasta Longa cun su Nieddu de Seppia (fresh linguine with seafood and lemon zest). Don't come here expecting Fettuccine Alfredo — here the flavors are bright and sharp, never heavy. This is comfort food that won't leave you feeling greasy or gloppy. — Eve Batey
291 30th Street between Church and Chenery Streets 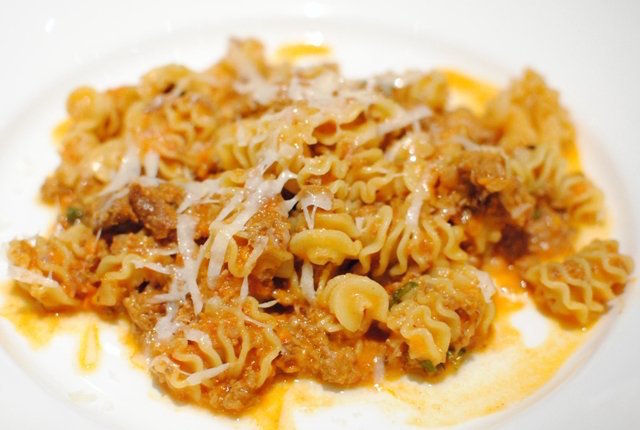 Locanda
As close as it comes to Rome on Valencia Street, Locanda has been turning out excellent pastas since 2011, among other dishes. This summer, Chronicle critic Michael Bauer updated his appraisal of outgoing chef Anthony Strong, writing that "he’s taken his skill to a new level." Sadly, the restaurant — owned along with Deflina by Craig and Annie Stoll — will lose Strong's talent in the kitchen, as he announced he'd be striking out on his own last month. Still, staples like the bucatini all'Amatriciana and preparations like radiatori (above) with lamb ragout are sure to remain, along with new additions like Thursday's gnocchi night.—Caleb Pershan
557 Valencia Street between 16th and 17th Streets 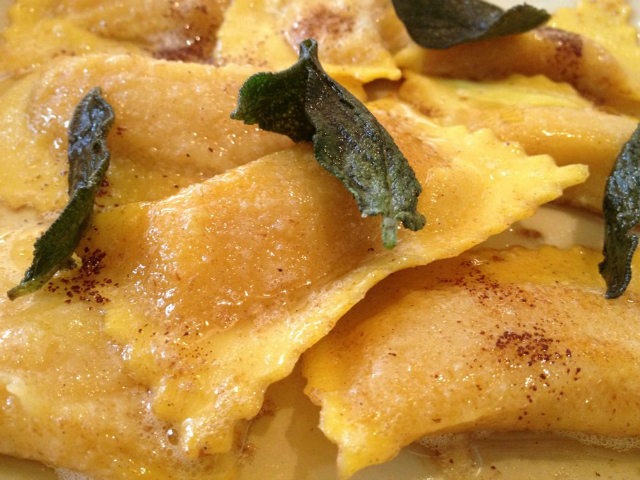 Quince and Cotogna
Placed next to each other on a FiDi stretch of Pacific Avenue, sister restaurants Quince and Cotogna share a chef and a kitchen, and some menu items, but have very different vibes. Quince is buttoned-up and fancier, Cotogna's more free-wheeling and casual, both are great. Current pasta standouts at Quince include their tagliolini with Monterey Bay squid, geoduck, and melon and a tortelli with corn, nasturtium, and fava beans that my mom termed one of her favorite things she's ever eaten. Cotogna, which is presently serving more pasta dishes than its sibling, boasts a handmade rainbow chard tortelloni and a taglierini with Dungeness crab that I could eat right now. Both places' menus are seasonal, so if you're reading this well after the publication date you'll likely have other options, all of which I'm sure will be similarly fantastic. — Eve Batey
Quince: 470 Pacific Avenue. Cotogna: 490 Pacific Avenue, both between Montgomery and Sansome Streets 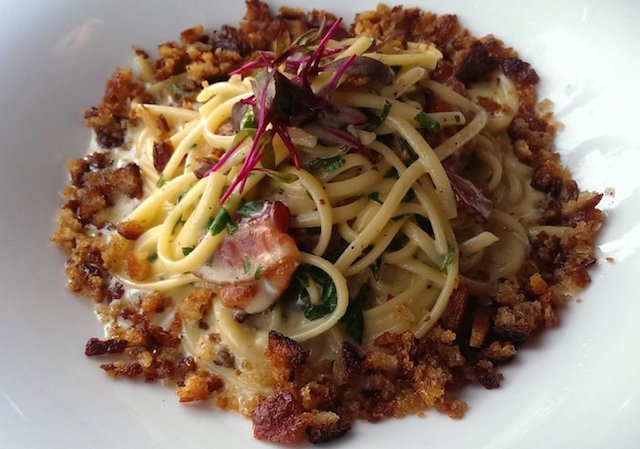 Red Hill Station
Opened in 2014 and already a quintessential Cortland Avenue neighborhood restaurant. I'd argue it's the linguine, with several excellent preparations, that keep Cortlanders coming back. Chef Taylor Pedersen's menu is best known for its well-sourced seafood, so definitely consider the classic Manila clams linguine with andouille sausage. The white wine and garlic broth is to die for. —Caleb Pershan
803 Cortland Avenue between Gates and Ellsworth Streets 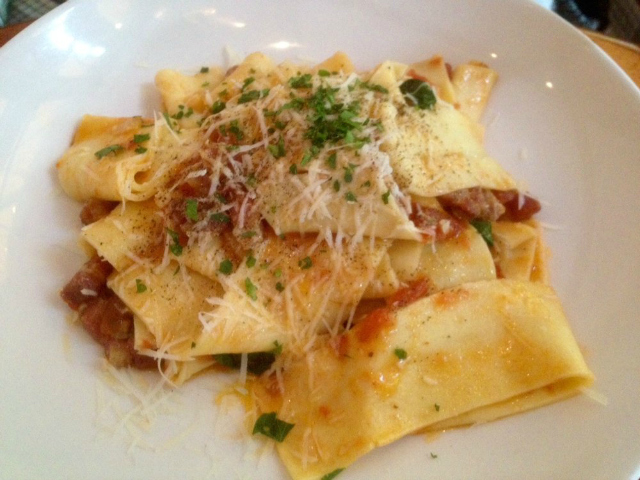 Rose Pistola
Rose Pistola has had a lot of ups and downs since its opening in 1996. Under then-superstar chef Reed Hearon it snagged the James Beard Award for Best New Restaurant in America in 1997, but after his departure in the early '00s, things took a turn for the, shall we say, touristy flavor of North Beach. But in 2015 the restaurant made its first outside executive chef hire in Steve Walker, and they've been a player in the pasta game ever since, with the addition of "elevated" (ugh, I sneer at that term too, but it's accurate in this case) versions of the Italian joint's signature dishes. I guess what I'm saying is that if you went there and had a bad meal before Walker arrived, it's worth a second look. It may seem like an overly safe choice, but their version of wild mushroom risotto is a comforting treat, and their tagliatelle with figs, chili, lemon, and cream sauce is really something special. — Eve Batey
532 Columbus Avenue between Green and Union Streets 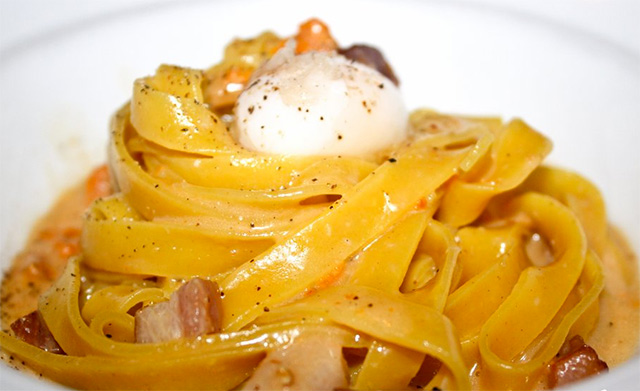 The smoked fettuccini with urchin at SPQR. Photo: Owie N./Yelp

SPQR
I always try to explain to people that SPQR isn't aiming to be classic in its approach to Northern Italian flavors and pastas, but it's more like sitting down in a contemporary restaurant in modern-day Milan and seeing what a talented young chef has come up with that week. The ever-changing menu at this Michelin-starred, Pacific Heights spot, led by chef Matthew Accarrino, has been known to offer a pasta tasting menu (though that's not currently shown on the website), and always highlights unusual flavor combinations and seasonal ingredients. Two favorites that often remain: smoked fettuccini with sea urchin, smoked bacon, and a soft quail egg; and bludnudlen with Tuscan blood sausage ragu, and pig’s foot pan grattato.  Jay Barmann
1911 Fillmore Street at Bush 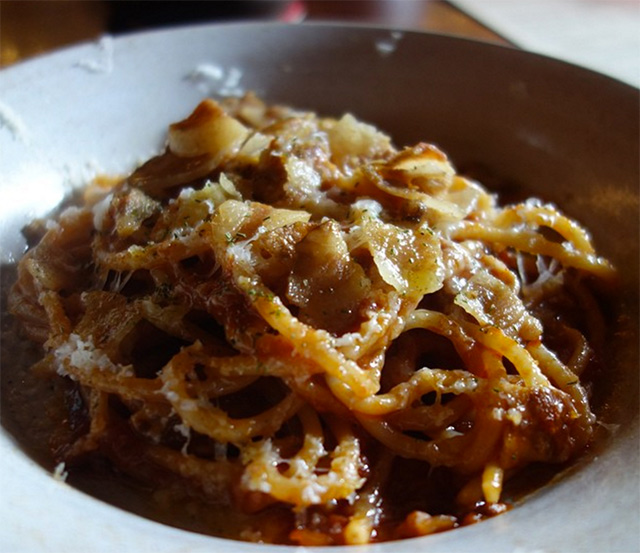 Tosca Cafe
The 2013 revamp of Tosca Cafe at the hands of New Yorkers Ken Friedman and chef April Bloomfield has only gotten better with time. In addition to a divine red-sauce special they now offer (which includes a braised pork with sausage and meatballs, pasta, and garlic knots, all served family style), the expanded pasta selection now includes things like trompetti with paprika sausage and broccoli di ciccio; and linguini with chanterelles, corn, cured egg yolk, and tomato vinaigrette.  Jay Barmann
242 Columbus Avenue near Broadway 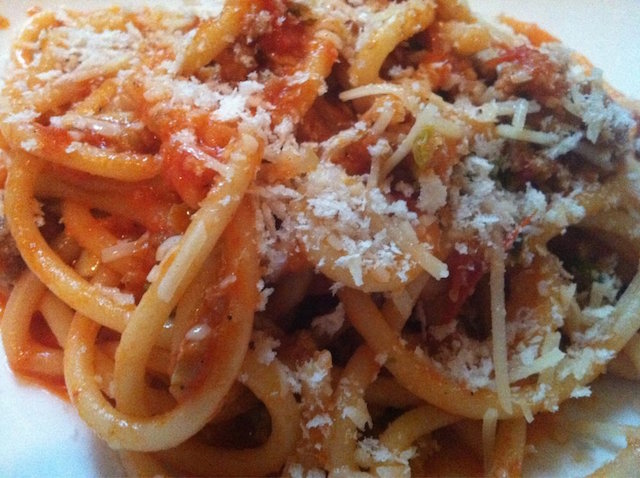 Uva Enoteca
The excellent boar bolognese lasagna, pasta pomodoro, and pasta fusilli are just some of the standout options available at this date-friendly, brick-walled Lower Haight spot. In addition to a good and reasonably priced wine selection and some solid starters, Uva Enoteca also now does delivery through Caviar and other services, which may come in handy for you. As we've noted in the past, the restaurant also has a great happy hour deal on both drink and food — so feel free to go wild. — Jack Morse
568 Haight Street, between Fillmore and Steiner Street

Farina (for the house-made, Ligurian-style handkerchief pasta with pesto, if you don't mind that it's $26)

Firenze By Night (for their gnocchi)

Panta Rei (for their ravioli, or their spinach tagliolini with prosciutto, pancetta, peas, and cream)

A confluence of events all hitting San Francisco the first week of October means that things are about to get more crowded than usual. Hardly Strictly starts Friday and lasts through the weekend,

Anyone who's ever taken the Octavia exit off 101 has seen and likely loves the mural gracing the side of Extra Space Storage. The puffy clouds painted on a bright blue sky provide

—
The 13 Most Delicious Pasta Spots In San Francisco
Share this