Depending on who you ask, the Prop. 60 ballot measure mandating the use of condoms in adult films either has strong majority backing, or its support “has fallen dramatically”. One interpretation of last week’s USC/Los Angeles Times poll is that November’s California ballot proposal requiring condoms in pornographic film shoots looks comfortably ahead, with 55% supporting the measure and 32% saying they’d vote against it. Another interpretation is that of the Free Speech Coalition, who point out that Prop. 60 had the support of 71% of voters when introduced, and is now “faltering among likely voters”.

The adult-film industry, whose active members are pretty staunchly opposed to the mandate, is pulling out all the stops in hopes that support for Prop. 60 continues to falter. Our old friends Treasure Island Media now post a “No On 60” pop-up ad before you can enjoy their website’s man-on-man action. Anyone who follows adult performers on social media has surely seen the “No On 60” memes that so many have adopted as their avatars, created by adult star Julia Ann and Bay Area designer Isabel Dresler. 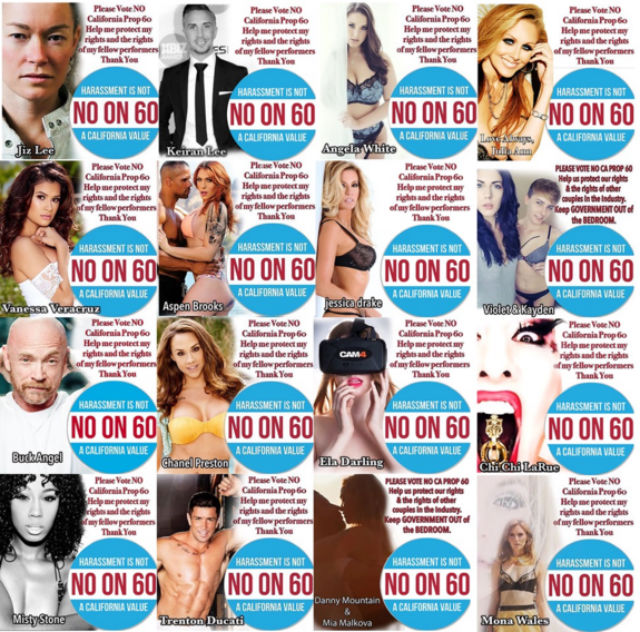 “I was feeling so defeated and overwhelmed by how much damage Prop. 60 could do to us as a work force and personally that I had to do something,” Julia Ann told SFist. “So I changed my profile picture to include the #NoProp60 button.”

The buttons have caught on to the effect that most adult-film performers in California now use them as their social media avatars. “To date, I think I’ve made around 800 [avatars] and another performer named Kissa Sins kicked in to help me and has made around 400,” she said. “I think there's around 1,500 out there as of now, which is huge since there is only an estimated 1,800 performers working currently.”

Aside from these social media efforts, Prop 60. has recently received a slew of "No" recommendations from various newspaper editorial boards, including the San Francisco Chronicle, the San Jose Mercury News, the Sacramento Bee, and the San Diego Union-Tribune. (To be fair, Prop. 60 did receive the support of the Bakersfield Californian.) A recurring theme in this opposition is that individual adult performers could potentially be sued or publicly doxxed the way the measure is written.

Attempts to solicit comment for this article from Yes On Prop. 60 committee and the AIDS Healthcare Foundation (the measure’s only major donor) were unsuccessful. But PolitiFact rates the claim as half-true, noting that “Some adult film workers, and perhaps a growing share, could face lawsuits if they have a financial interest in the content they work on. But Prop 60 does not specify what constitutes a financial interest. Ultimately, it may be up to the courts to decide.”

But these court cases could pose a huge threat to performers, who — if it is argued they make any money off the film’s sales — would be at risk of having their real names and home addresses made public in court documents, even if found innocent. “Performers are now facing the prospect of thousands of lawsuits, and the exposure of their names and home addresses, and possible bankruptcy from legal fees,” said Mike Stabile, communication director of industry trade group the Free Speech Coalition.

“The fines start at around one and a half times the cost of production, and the person who brings the suit gets 25% of that and their legal fees paid for by the defendant,” Stabile told SFist. “And you can bring that suit against multiple people involved in the production or distribution — the studio, the performer, the cable operator, and so on. It's a cash cow, and anyone in the state can get in on it. In his pursuit of condoms, he's put a target on the head of everyone in the adult industry.”

(By “he”, Mr. Stabile means AIDS Healthcare Foundation president Michael Weinstein, who is known to our readers for his vocal opposition to PReP medication and for suing the city over formula retail limits applied to its AHF Pharmacy and Out Of The Closet retail stores.)

Prop. 60 advocates have about an 8-to-1 advantage in campaign contributions, thanks to the AIDS Healthcare Foundation, and the measure is additionally supported by the California State Association of Occupational Health Nurses. Prop. 60 is opposed by the California Democratic Party, the California Republican Party, and the Harvey Milk and Alice B. Toklas Democratic Clubs, respectively. Supervisor Scott Wiener will be outlining his own opposition to Prop. 60 at a Folsom Street Fair booth Sunday.


Image via Women By Julia Ann

Renewed for a second season just a week after premiering on Netflix in its entirety this February, Fuller House could be giving its predecessor, the long-running San Francisco-set sitcom Full House, some competition