Since adopting her in 2006, Vivian Tsay of Oakland has always loved hiking with her Australian cattle dog mix Cece. Even after Tsay lost Cece for six weeks in the El Dorado National Forest, a time during which she assumed the now 11-year-old dog might be gone forever, Tsay is still glad to have granted her canine companion so much freedom.

"To see all those years of her running through the woods — beaches, rivers, where she was in paradise — I could never take that away from her," Tsay tells SFist by phone, with Cece, now safely home, barking happily in the background. She's just had a bath, but her fur is still covered in sap.

Cece was recovered recently after becoming lost on July 3rd, and dirty fur notwithstanding, she's not much the worse for her time in the woods. That's the thing that shocked Tsay, but maybe won't surprise readers of Jack London or fans of films about lost dogs finding their way through the woods. Although Tsay was frightened for Cece, in fact her dog "was living like a wolf." Tsay speaks for many when she says that "I couldn't turn things around like that for myself. To be in a compromised position and own being wild, and then come back and be so unchanged in her general demeanor? Or even be slightly sweeter?" 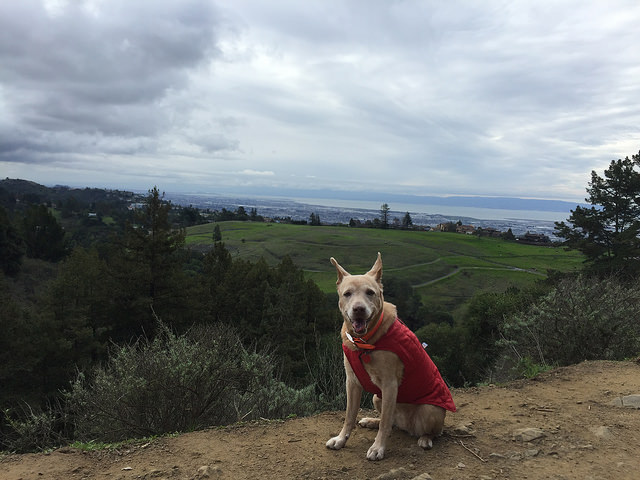 Cece has always been attentive on hikes, Tsay maintains, and would follow her closely by voice. But in Cece's old age her hearing is getting worse. Despite being called by Tsay, on a hike to Bassi Falls, Cece bolted and wouldn't answer. "Because of her poor hearing, the loud waterfall, the people filtering in to the waterfall area," Tsay hypothesizes, "that caused [Cece] to become unsettled, and she went rogue. A switch flipped, and she became a little bit of a wild animal, and just wanted to stay away from anything with two legs."

That attitude persisted. Panicked, Tsay searched for Cece, but when she found her hours later, Cece simply walked way and couldn't be found when followed. Finally, Tsay pitched a tent near the falls for the next few days, looking for Cece, putting up signs, and alerting rangers.

And then, in time, Tsay had to go. "At any moment," she recalls, "I would think 'I'm looking at one million trees, and she can be standing behind any of them. It felt so impossible." One report of Cece lead nowhere but gave Tsay a flutter of hope. Time passed, and one day while camping in a different part of the Sierras, Tsay received a voicemail after popping into an area with cell signal. People had seen a dog, likely Cece, several times over the past few days. At that moment, says Tsay, "I felt very much like it was up to [Cece]. She was out there, she was definitely somehow staying a live. It was really up to her to decide [to come home], to bring her wits together and approach someone and come in."

Tsay drove a friend's car to the spot where a family had spotted Cece, and a group of kids led her to the peninsula where they'd last noticed her. "I saw her standing on the beach, crouched down," Tsay recalls. Like before, Cece couldn't be tamed: She took off the one way she could — by swimming, an activity Tsay says she'd never enjoyed. "This is a dog that hates swimming." The unofficial search party followed Cece until the sun went down, and eventually, Tsay drove home to catch a plane to Chicago for a planned trip. "That was a really hard thing to do." Tsay recalls. "It's so difficult to have hope as well as to be able to move forward in your life."

While away in Chicago, Tsay's cousin and her cousin's dog, Captain, came to the rescue. Returning to the wilderness area, Captain found Cece, who was once again skittish, playing more hide and seek. Finally, when Tsay's cousin began feeding Captain, Cece joined in, and Tsay's cousin took the dog into a headlock. And then, a funny thing happened. "The second she clipped on a leash, [Cece] was 100 percent a dog again," Tsay says.

That moment speaks to Cece's adjustment back in Oakland: It hasn't been too challenging. "The first week or so back, she slept a lot, and we were doing meals ever three hours," Tsay says: Cece had lost a third of her body weight, but she's gained that back, as well as most of her energy. "She's super playful, she's even a little more sweet." Tsay thinks. "She acts so much just like a normal dog, her arthritis isn't a problem now and she's, like, less shaky. She's happy to see her dog friends, her kid friends."

Though Tsay still sounds shaken by Cece's temporary loss, and even unsettled by her unexpected return, a friend's advice that proved helpful during the process sticks with her still. "Cece was off there doing her own thing," Tsay likes to think. "We can all only hope to be that free before we die." 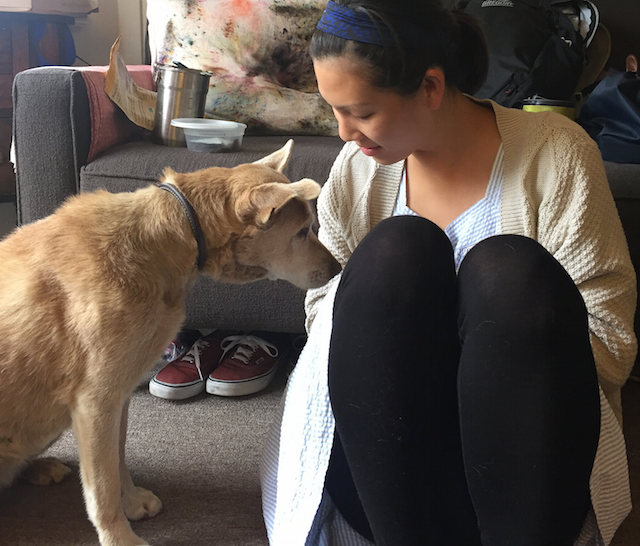 The alleged thieves spotted last month stealing mail across San Francisco with what is believed to be a USPS master key remain on the loose, and officials are still investigating just how, exactly,

In news that is sure to remind everyone to check their earthquake kit (you have one of those, right?), the Chronicle reports that the odds of a major quake happening in the Bay