For years now there's been all this public back-and-forth about George Lucas and his plans for a big museum, named for himself, that would house a collection of what's alternately been referred to as illustration, graphic art, film memorabilia, and "narrative art." It being still a privately held collection, not many people have seen it, but as the museum begins hiring its first full-time employees and prepares to push forward with a proposal to build a permanent home on Treasure Island (among possible other bids), Lucas decided to grant some access to the collection to Chronicle art critic Charles Desmarais, the seeds of which are being kept in a building on Lucas's Marin County estate.

Desmarais is, on a whole, impressed with what he saw, which included "55 original drawings and paintings, as well as eight thick notebooks containing more than 700 photographic reproductions" of pieces in the collection, including major works by famed American illustrators Norman Rockwell, Maxfield Parrish, N.C. Wyeth, and Beatrix Potter. 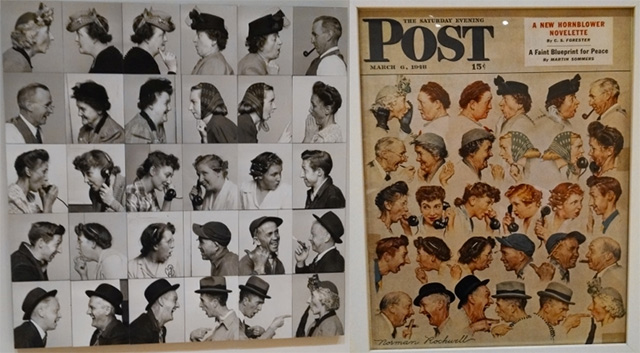 The peek at this "seed collection," as they're calling it, also includes original works by lesser known artists that provide glimpses of earlier periods in American life. One of those is Joseph Christian Leyendecker (1874-1951), who like Rockwell illustrated covers for the Saturday Evening Post, and whose cheeky election-year image “Republicans vs. Democrats” is just one of these rarely revisited pieces that Lucas has acquired.

Says Desmarais of some of these stylized depictions from popular culture, "Even idealized and sentimental narratives reveal something about how we want our world to be, how we wish to be depicted." 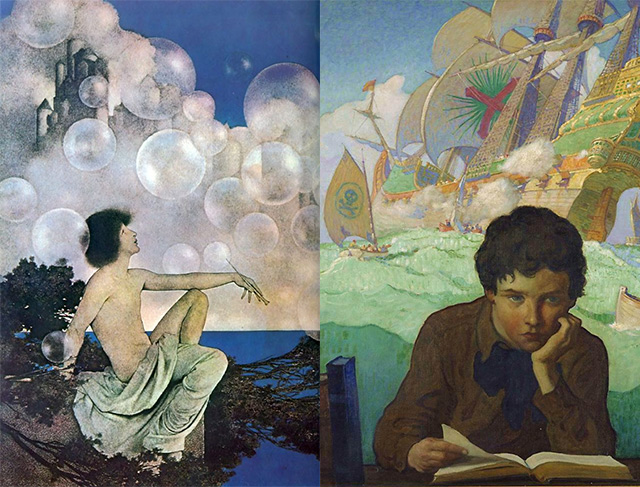 Images of Maxfield Parrish's "Air Castles" (1904, via eBay print); and NC Wyeth's "The Storybook," which was originally a Ladies' Home Journal cover, both of which original paintings Lucas now owns.

Newly hired director of the Lucas Museum of Narrative Art (which has a new website linked there with more about the collection), Don Bacigalupi, explains to the Chronicle, "Narrative art is, simply stated, visual art that tells a story. It manifests itself in every kind of medium, in every culture, in every form that you can imagine." And, he adds, regarding Lucas's vision for his museum to elevate illustrative and popular forms like animation, "The museum world has often ignored ... some of the most compelling narrative art forms. So they tend to be relegated to the status of low art, or popular art or media art  all the binaries that we set up with ‘high’ and ‘low,’ and ‘popular’ and ‘fine.'"

Lucas is seeking to upend those binaries, and Desmarais grandly states that the Star Wars creator's collection "may just be the core of a great museum," and the beginnings of a larger institution devoted to popular forms that so far have remained the purview of some of these artists' estates alone  like the Norman Rockwell Museum in Stockbridge, Massachusetts, and the Brandywine River Museum in Chadds Ford, Pennsylvania, near the Wyeth family home.

And to be fair, Rockwell's works especially have been garnering fine-art prices in recent years  two pieces, "The Gossips" and Rockwell's even more famous "Saying Grace" (1951) set record prices at a 2013 Sothetby's auction of $46 million and $8.45 million respectively, and it turns out that Lucas was the winning bidder for both.

Lucas now owns 147 original Rockwells, and 41 original paintings by Parrish, and those numbers are likely growing in preparation for being exhibited in the eventual museum, which is still a few years (at least) from becoming a reality.

SF remains just one bidder for the Lucas's longtime dream of a museum legacy, after he already failed to convince the Presidio Trust to take his money in 2013-2014, and as activists and others fought a plan by Chicago mayor Rahm Emanuel to give Lucas a home on the waterfront there.

Previously: Rumors Ramp Up About George Lucas's Treasure Island Museum, Which Will Have Same Architect As Chicago Plan

Norman Rockwell's 'The Gossips' as it appeared on the Saturday Evening Post in 1948, and the photo models he used to create it. Lucas now owns the original painting, which includes an image of Rockwell himself in the second to last and last frames.

In a bid to ease congestion during commute hours, BART officials today announced the launching of a new rider program called "BART Perks." The idea, officials explain in a press release, is to

Google may have hoped to wade gently into the ride-hailing waters jealously guarded by San Francisco's Uber and Lyft, but news today that its Waze-based carpool app will be expanding to San Francisco

—
What George Lucas Means By 'Narrative Art': Chronicle Gets First Glimpse Of His Collection
Share this