As the legend has it, one day in 1928, George Whitney decided to sandwich a scoop of ice cream between two oatmeal cookies at his hot dog and ice cream stand at Playland-at-the-Beach, next to San Francisco's Ocean Beach, which for nearly a century was like the West Coast's answer to Coney Island. He dipped the sandwich in dark chocolate and began selling them, and according to the IT'S-IT company's narrative, "The delicious combination of savory sweetness was declared by all to be 'IT!'" thus giving the ice cream sandwich its quirky name.

The ice cream concession was actually one of several businesses that George Whitney and his brother Leo owned and operated at Playland, beginning in 1923 with a photo concession that offered customers immediate photo processing so they could take home keepsake photos the same day they were taken. The Whitney brothers would go on to open several more concessions in the next few years, including a souvenir shop, several shooting galleries, and the refreshment stand pictured above. Eventually, the stand where the ice cream sandwich was born would get a sign above its awning declaring "This Is IT!", and the sandwich name would later evolve out of that. (The Wall Street Journal has it that Whitney himself exclaimed "It's It!" when he hit upon the cookie-ice cream combo, but it seems more likely that he would have said "This is it!", no?) 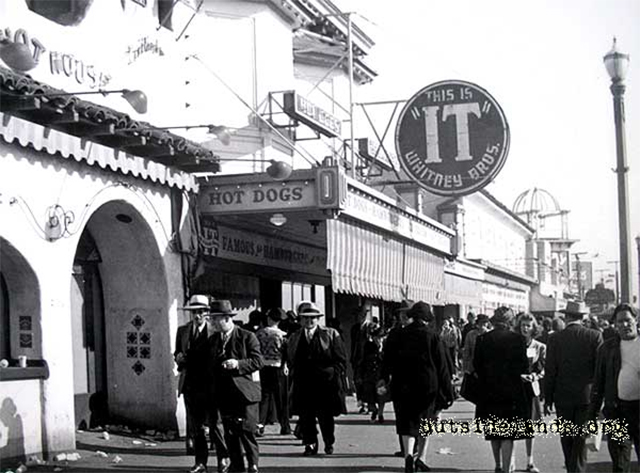 Playland itself became known as Whitney's Playland or Whitney's at the Beach after George and Leo Whitney took over the management of the growing complex in 1926 and began taking over other concessions. When the Depression hit, the Whitneys savvily bought out many of the struggling concession owners and ultimately owned most of Playland outright, purchasing the famed roller coaster in 1936, the Cliff House in 1937, and the merry-go-round in 1942. The war years were big for Playland with on-leave servicemen especially, as George's son George K. Whitney, Jr. would later recount. He quoted his father as saying, "Playland is a nickel and dime business, and we'll do well as long as people have nickels and dimes in their pockets."

Before his death in 1958, George Whitney Sr. would purchase what remained of the grand Sutro Baths, which by 1952 had become the Sutro Baths Museum and just a relic of its former self, as a huge public pool facility with capacity for 10,000 guests at a time.

IT'S-IT sandwiches, though, remained an essential part of Playland up until the complex's demise in the late 1960's, and the Whitneys' original stand was the only place you could by them. Playland was demolished in 1972 and the land sold to the National Park Service four years later, along with the Cliff House property. The IT'S-IT name and concept was sold to George Mavros, a small-time operator with a business near Ocean Beach, but within two years, according to the Journal, he decided he couldn't keep up with demand and sold the brand to Charles Shamieh and his three brothers, who would then open what is the current IT'S-IT production facility in Burlingame in 1976. 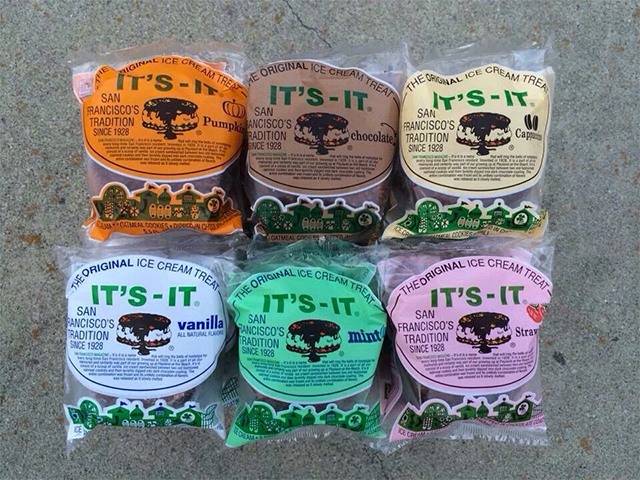 Demand has surged in recent years, apparently, with Google having the company produce a Google-branded version a decade ago for their Googleplex cafeterias with no trans fats  something that would prompt IT'S-IT to remove trans fats from all their products. Facebook, Twitter, and Uber all regularly place big orders for their cafeterias now as well, and the facility reportedly produces and hand-packs over 100,000 sandwiches per day.

Shamieh takes pride in the brand's history, telling Lucky Peach a couple years ago, "A grandmother or grandfather, in their late seventies or eighties, will come in with their grandchildren and tell them, ‘My granddaddy used to take me to Playland to get one when I was your age.’”

Now, as of last week, IT'S-IT added a seventh ice cream flavor to their roster, green tea, the first such addition since 2014 when they unveiled the pumpkin flavor, leading to immediate sell-out situations across the Bay. These join the classic flavors vanilla, chocolate, mint, strawberry, and cappuccino, and all the flavors have been sold throughout California, and in parts of Nevada, Oregon, Washington, Hawaii, Arizona, Texas, and New York since the 1980's  look for them at Fresh Direct in NYC, and at The Bedford Cheese Shop in both Manhattan and Brooklyn. (Also, all the flavors are available by the case via mail order.)

66-year-old Saleem Bey, who may also spell his name Saleem Bae, was one of three people injured Tuesday in a dramatic taxi crash on Market Street. Now, a customer of his has launched

A low-profile antiquities heist earlier this month in San Francisco netted thieves valuable Greek and Japanese artifacts that officials estimate to be worth at least $50,000. According to The Examiner, this is

—
The History Of IT'S-IT Ice Cream Sandwiches, Born In San Francisco
Share this