San Francisco is set to replace all of its Muni train cars by the far-off year of 2028, but the first of the shiny new Siemens light-rail vehicles will begin entering service as soon as 2017. That's right, you'll be able to hop on a brand new train starting next year. And, excitingly, SFMTA yesterday released new renderings and details about the trains to let you know exactly what to expect.

Assembled in Sacramento, the new fleet will completely replace the current Breda cars manufactured way back in the stone age of 1996. But the agency isn't just doing a one-to-one replacement: SFMTA last week was on the receiving end of $45 million in cap-and-trade funds from the California State Transportation Agency. This means that the agency can now purchase an additional ten cars and up the total fleet size by 64 from 151 to 215  but that's down from the 260 new cars that were promised in 2014.

As noted earlier, the new trains are expected to break down a lot less often — they're allegedly capable of traveling 59,000 miles before any sort of failure. By contrast, the current trains reportedly only travel 4,000-5,000 miles between each failure. This improved reliability is for a bunch of different reasons, one of which being that designers figured out a way to reduce wear on specific components that most frequently needing repair, i.e. the steps.

"One big reason these trains will be so much more reliable is that they will have far fewer mechanical issues with the doors and raising steps, which are the single biggest cause of delays on the Metro system," explains SFMTA officials. "The doors and steps on the Siemens trains have a modern design and assembly technique requiring fewer parts to perform the same functions."

In addition to this, Muni operators will be able to raise or lower steps independently instead of all or nothing. "To allow customers to access handicap-accessible platforms at street-level stops, Muni operators must [currently] raise all steps on the right side of the current trains," the SFMTA announcement reads. "With this new feature, operators will be able to raise only the front steps necessary for platform access, reducing wear on the other steps."

Even the insides are getting a makeover. A mock-up was shown off at the Ferry Building last summer, and officials toured the inside and took a real-life peek at what we'll all soon be sitting on.

Speaking while inside the mock-up, SFMTA Director of Transit John Haley (pictured below) explained that the train interiors had been designed with rider input in mind — right down to the seat colors (you'll likely notice that, unlike with another Bay Area transit agency, the new seat colors are not those of the Seattle Seahawks.)

So take a good look now at the photos below. You're going to be seeing a lot more of that in the near future — and for many years to come. 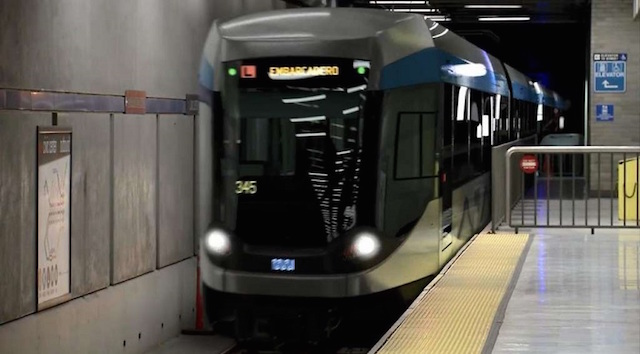 Previously: Muni Is Getting A New Fleet Of Train Cars, Starting This Year

Two men visiting San Francisco tourist hotspot Twin Peaks ended up with a harrowing story to tell the folks back home, when they were robbed of pretty much everything you could think of