The Castro is about to get two new restaurant options in spaces that have lain dormant for the last year along Market Street: Nomica, a new, modern Japanese spot from the team behind Sushi Ran in Sausalito, in the former Pesce space (2223 Market); and Finn Town, the modern tavern from onetime Top Chef guy Ryan Scott that we first learned about in May, coming to the former Barracuda/Janchi space (2251 Market).

Both Janchi and Pesce shuttered last summer, leaving big holes on what is otherwise a busy stretch of Upper Market near Castro and Noe Streets. Now, as Tablehopper reported several weeks ago, Nomica is on track for a late August opening, with chef Hiroo Nagahara at the helm. Nagahara is a native of Tokyo who most recently launched The Chairman bao trucks in SF, and also previously worked for Charlie Trotter in Chicago.

While Nomica may feature some raw items, sushi is not the story here, and Nagahara says he's more interested in doing modern takes on homestyle Japanese dishes his mother made in his youth. These include a kara age "cube" (kara age is Japanese fried chicken), a parmesan waffle with matcha butter, and chicken wings stuffed with gyoza (dumpling) filling.

Tablehopper promises a major makeover in the space by CSS Architecture/Cass Calder Smith, including "a lot of on-site carpentry, utilizing black walnut, with 30-foot cypress beams and cedar."

Also, the word "nomica" actually means "drinking house" in Japanese, and there will be a bar with a focus on Awamori, a distilled rice spirit from Okinawa that is basically like higher proof sake. 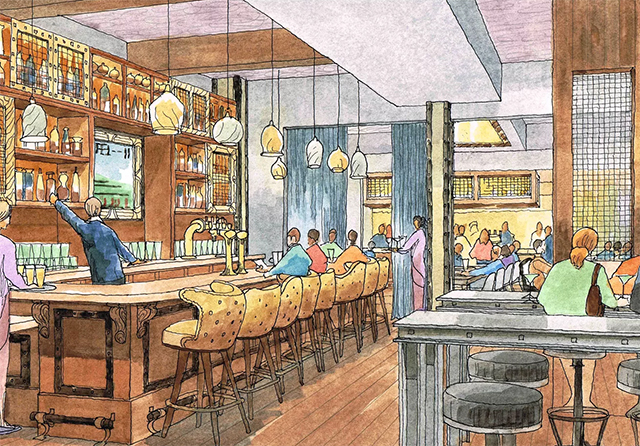 Next up, two months later (if all goes according to plan) will be the debut of Finn Town, which Scott has previously called a "tavern with a twist." Food items previously mentioned on the menu include gruyere popovers, crab tater tots, and sweet tea-brined fried chicken. A press release out yesterday reveals a bit more, including the hire of chef de cuisine Jason Raffin, who comes via stints at The Coachman, Scala's, and Bin 38/Scotland Yard.

Also, in related news, Scott announced that he's closing the final location of his five-year-old casual concept Market & Rye, at 300 De Haro Street in the Design District, at the end of the month. Says Scott, "I’m so focused on Finn Town, together with my cookbook launch, expanded radio show and media appearances, that it makes sense to step away." He promises though that some Market & Rye menu favorites will migrate over to the Castro spot, including the crispy chicken sandwich.

Scott hosts a weekly radio show on KGO-810, 5 to 7 p.m. on Saturdays, called "The Ryan Scott Show," and following years of TV appearances on the Today Show and elsewhere, he's releasing his first cookbook, ONE TO FIVE: One Shortcut Recipe Transformed into Five Easy Dishes.

The typical lines for Tartine have migrated deeper down 18th Street, from Guerrero to, now, Alabama Street. There, inside the Heath Ceramics building, Tartine Manufactory is now open, and the much-anticipated all-day spinoff

Another major player just joined the race to bring self-driving cars to the masses. The Chronicle reports that the CEO of Ford announced yesterday plans to put fully autonomous taxis on the roads