Although much of San Francisco has been engaged in a de facto Pokémon Go crawl for weeks, a somewhat formal affair planned for tomorrow promises to be the real deal, if you consider a Facebook event with lengthy and complicated instructions and plenty of disclaimers to be the real deal. The event page seems legit enough for 7,800 people to RSVP, anyway, with 28,000 registering their enthusiasm by clicking an "interested" button. Of course, that kind of turnout is a somewhat frightening prospect, and it's definitely what SFPD had in mind when issuing Pokémon Go related safety tips. But, as you probably suspect and as I argue below, it's unlikely to be that big a thing (I hope!)

"The Pokémon Crawl is a simple gathering for all Pokémon Go Trainers to meet up, make new friends and participate in a fun activity together and is NOT an officially organized event," writes one Sara Witsch, the event's listed host. "I am in no way associated with Niantic, Inc. ©, Pokémon. ©, Nintendo © Creatures Inc. ©, GAME FREAK inc ©. or any of the venues and companies listed above."

Those venues are many, as everyone appears to want a piece of the action. Everyone from SoMA StrEat Food Park to Lyft is offering discounts and specials. The event starts at two locations, Dolores Park and "over by the Embarcadero," with groups supposedly gathering at 6 p.m. and then departing at 6:30 p.m. to catch 'em all. 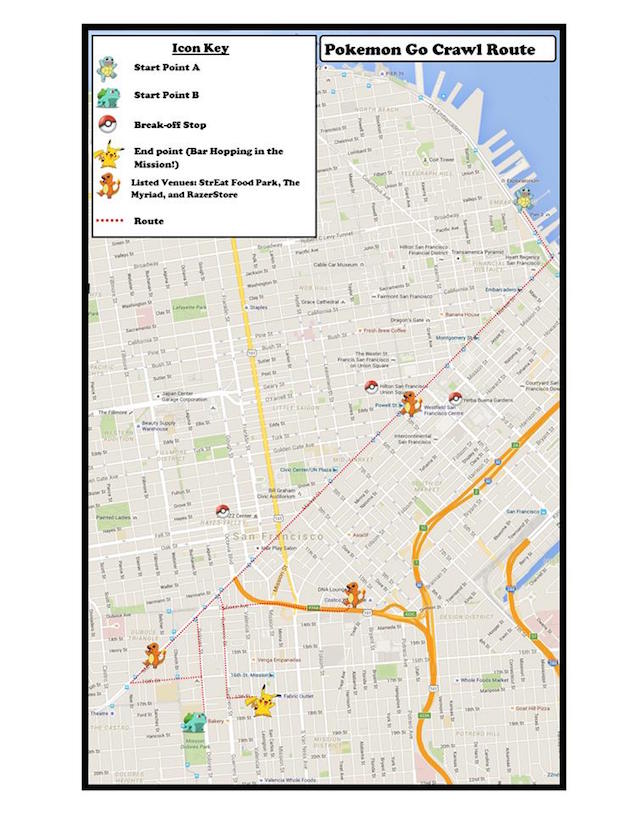 So yes, maybe I'm just saying this because this whole crawl sounds like a fun time and potentially a minor disaster, but I already have a creeping sense of fatigue with this game. An essay originally published to Linkedin and picked up by Recode puts it nicely by asking if Pokémon Go will be an enduring success like Candy Crush or a flash in the pan like Draw Something (Remember that game? Don't worry if you don't, that's actually the point). On that note, I think it's a legitimate question whether or not Pokémon Go will be passé in time for this crawl. At the least, don't expect anyone to follow any sort of clear path or order — in all likelihood we'll just see people with a loose sense of affiliation playing Pokémon tomorrow ... as you might later this evening or at any other time this month.

Related: The Worst Habits Of Pokémon Go Players In Their SF Habitat (And A Few Upsides)

Next year, monthly premium rates in California will go up by 13.2 percent on average, the result of two insurers who have requested steep rate increases. As CBS5 and the AP report,

If nothing else, the weather this week is going to be really consistent  probable fog early on, burning off later but never warming up much, with the wind threatening to knock you down