On the Inside-Baseball track of the local food world today, it seems that there was a quiet parting of the ways in the last year (or more) between partners Sammy Hagar and Tyler Florence at acclaimed Mill Valley restaurant El Paseo, and there's been a change of guard in the kitchen as well. SFist got word recently of a new Paella on the Patio series, which kicked off Sunday July 10 and will continue every Sunday, featuring a $28 two-course deal with both standard and veggie paella, but at "Sammy Hagar's El Paseo," which raised the question of where Florence was in the picture. Also, chef Henry Cortez, who's been in the kitchen for four years and been in the executive chef role since early 2015, is revamping the menu, which is set to change later this summer.

Hagar and Florence revamped and reopened El Paseo as a kind of modern steakhouse in 2011 in a partnership that was announced as early as 2009  though it's unclear what financial stake Florence may have had in the business. As Hagar revealed in an interview with Paste Magazine from last September, the relationship apparently dissolved quite quickly, despite the fact that Florence's name has remained attached to El Paseo in the press pretty much since it opened five years ago  and the Chronicle's Michael Bauer was still speaking about Florence's link to the restaurant as recently as 2014, and referring to him as "chef" in 2013.


"Tyler wanted to make it pretty much a steakhouse with a small market inside and big cuts of meat hanging in the windows. I told him, ‘Hey, man, I’ve been living in this town since ’72. That kind of thing doesn’t really fit Mill Valley,'” Hagar writes. Sammy then realized he wasn’t a good match for him and said Florence “seemed more interested in being a celebrity than in being a chef.”

Speaking to the Marin Independent Journal in 2009 when Florence and Hagar first joined forces, Florence had described his original plan for the revamp as "like Chez Panisse, but American rootsy, rustic."

Asked for further comment on the split or when exactly it occurred, Hagar simply confirmed that the two "parted ways," and we know that almost immediately after El Paseo's reopening in 2011 Florence helped to hire chef de cuisine Preston Brown to run the kitchen, although Brown, who came from New York for the job, returned to the East Coast by spring of 2012. Florence, who lived around the corner from the restaurant until 2014, took over the kitchen again at that point, as far as anyone knew.

Plenty of Yelpers still seem to believe Tyler Florence is involved, with reviews that mention him as recently as last month. And if you search for El Paseo now, the Google listing for the business still has Florence's name attached as well. 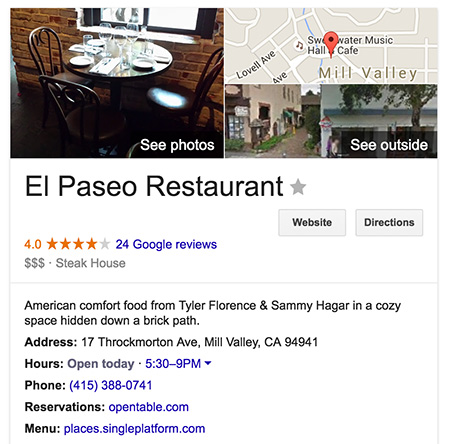 Perhaps tellingly, Bauer dropped El Paseo from the Chron's Top 100 in 2015 without ever explaining why. Now, if you look on the History page for the restaurant, there's neither any mention of Florence nor any mention of the spot's long history as a respected French restaurant, and then as one with both Japanese and French influence under chef Keiko Takahashi (now of Keiko a Nob Hill) in the last decade, even earning a Michelin star before it closed in 2008.

The current menu retains a steak and fish focus, and it's unclear how significantly it may change in the coming months  though the paella thing may be a clue.

Florence, meanwhile, continues to serve as executive chef and partner at Wayfare Tavern downtown, which Bauer elevated to three stars in 2014 and added to his Top 100.

These days it seems like each week brings with it another tragic story of someone being forced out of the apartment they call home, and today is no different. The Chronicle reports on