To those who would contend that San Francisco has no proper seasons, I would say that first, you're demonstrably wrong, and second, I would add that if you must hold fast to something that changes drastically here, you might consider the cocktail menu at Trick Dog.

That bar, which has made a splash since its inception in 2013, gets an overhaul semi-annually by drinks group, the Bon Vivants, who operate it and a growing Bay Area booze empire. Knowing well that America could use a drink and a laugh at the expense of this wearisome election cycle, Trick Dog's latest menu incarnation is inspired by political campaigns. Past menus have had themes ranging wildly from conspiracy theories to Pantone colors.

Imbibe magazine tells us that the menu comes to bargoers either in the form of a flag or as a page filled with campaign buttons, each listing the same recipes. Eater has a few of the drinks, which include the Bill Clinton inspired "Didn’t Inhale:" That's Japanese whisky, LoFi Gentian Amaro, manzanilla sherry, blackberry, and wakame, served up. It sounds good enough to inhale a few of them.

For the entire catalogue of Trick Dog's past cocktail menus, look no further than Alcademics. 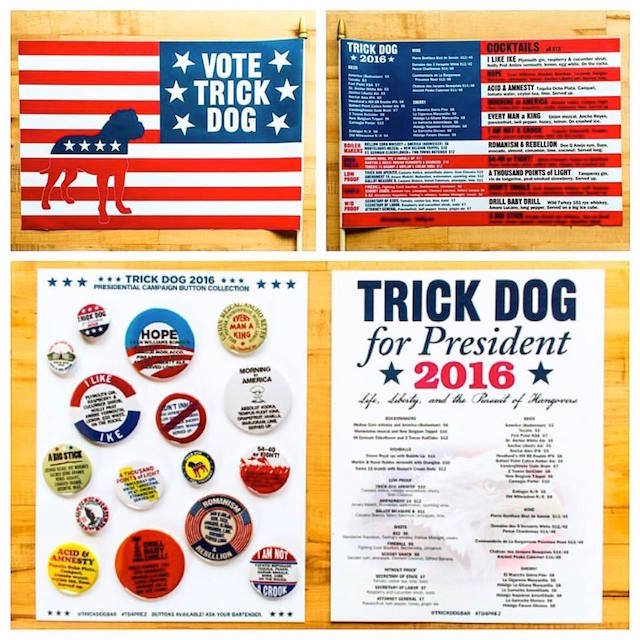 This week we got the news that Adriano Paganini, the prolific restaurateur behind Starbelly, Beretta, Super Duper, and Belga, among others, is taking over the Betelnut space on Union Street. We also learned

A man was rescued this afternoon after he fell from the cliffs near Sutro Baths into the ocean and swam to a nearby cave for safety. Shortly after 3:15 p.m. today,