The space left vacant after the December closure of Local Mission Eatery at 3111 24th Street has come alive again at the hands of "Indian soul food" truck chef-owner Rupam Bhagat, whose Dum truck has been around the Bay Area for just over two years now. This is a first brick-and-mortar location for Dum, and as Tablehopper reports, the menu  which you can see in full here  borrows much from the truck menu, where Bhagat's traditionally cooked chicken biryani has been a star from the beginning. But now there are skewers and more salad options at dinner, as well as a vegetarian bowl of the day and daily changing entrées that include butter chicken, red kidney bean stew, pork vindaloo, and braised lamb shank.

Bhagat hails from Bombay but was trained at the Culinary Institute of America, after which he landed a hotel chef gig with Ritz-Carlton, and working at hotels in Portugal, Bahrain, Florida, and Arizona before moving to the Bay Area in 2014 and launching the food truck.

And good biryani and stellar rice are things Bhagat clearly wanted to show San Francisco eaters, whose exposure to Indian food has been largely confined to steam tables, variations on tikka masala, and the upscale takes on regional dishes from places like Amber India and Dosa. The Indian process referred to as "dum" is the extra-slow cooking method in a large pot which is key to good biryani, as the Chronicle's Jonathan Kauffman discussed in this early review of Bhagat's Dum truck. 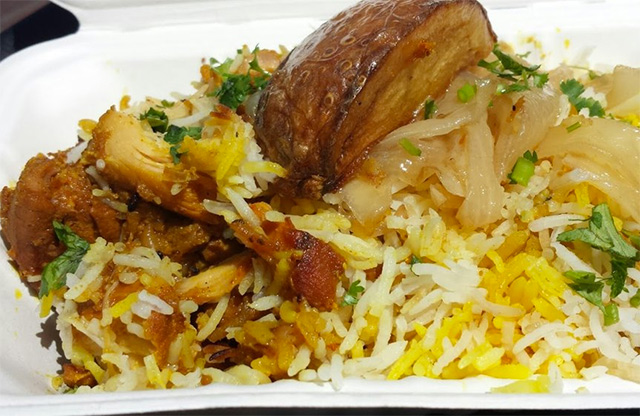 Also, Bhagat's rice, Kauffman noted, "contains multitudes," and is rich with caramelized onion goodness as well as mint and cilantro.

"I'm from Bombay, and Bombay is a melting pot like San Francisco," Bhagat said of his recipe at the time, which combines both Northern and Southern Indian regional styles along with his mother's recipe.

Dum is open daily, except Monday, for both lunch and dinner.

Building fiber internet is an infrastructure headache — expensive, time-consuming — and so San Francisco web devotees continue to pine for the fast stuff with no clear delivery date in sight. But one provider is